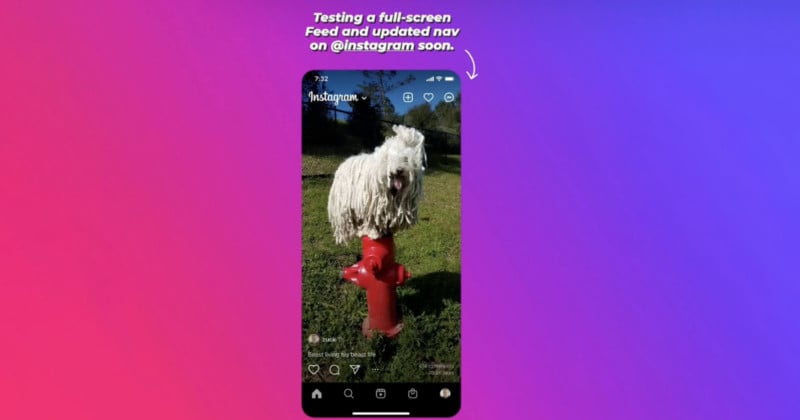 Facebook isn’t the only Meta property that is leaning harder into adopting more TikTok-like features. Instagram is also currently testing a full-screen feed that strongly mimics the company’s rival.

Announced on Mark Zuckerberg’s Instagram, the company says that it is currently testing a mode that will make its feed take up the full screen, akin to how TikTok appears.

“We want to make it easier to discover content and connect with friends,” Zuckerberg writes. “Photos are still an important part of Instagram, and we’re working on ways to improve the way they show up in a full-screen Feed too. Some people will start seeing this test soon. Excited to hear your feedback!”

Other than the change to how feeds will start to look, Zuckerberg’s comment about photos being an “important part of Instagram” is the first that the company has talked openly about its view of photos on the platform since last year. Last July, Instagram’s head Adam Mosseri said that Instagram was “no longer a photo-sharing app” and that it was going to focus on video since it was the number one way its users stayed engaged.

Since then, most of Instagram’s updates have focused on video and shopping, while very little has been prioritized for photography.

But Zuckerberg’s words here seem in contrast to that past statement, whether or not it was intentional. Only time will tell if Instagram will start to lean back into what made it popular to begin with: photos.

Meta is Going Hard at TikTok

The announcement of the full-screen mode joins another report form Facebook that indicates Meta is pushing hard to copy features that makes its competitor TikTok successful. Facebook plans to revamp its feed algorithm to prioritize recommended posts rather than content posted from accounts people follow. Facebook had apparently grown concerned that it was not doing enough to compete with TikTok and executives decided that the solution was to rethink the way the feed works entirely.

These changes to both Facebook and Instagram seem designed to support Reels, which is Meta’s answer to TikTok’s core business model. It remains to be seen if these copy-and-paste design decisions will be enough to keep TikTok’s popularity at bay.