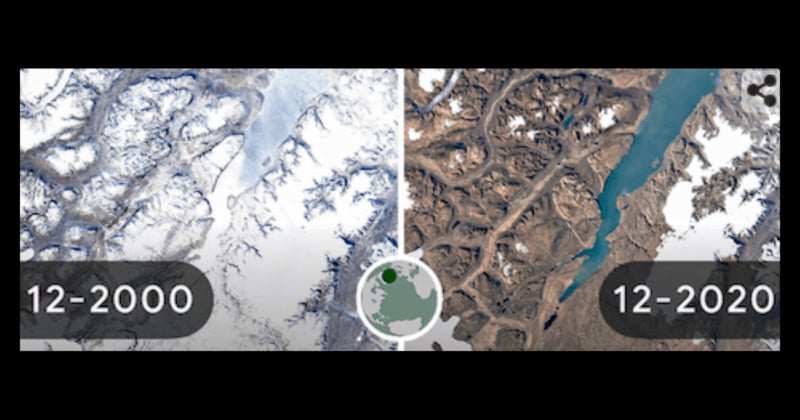 In celebration of Earth Day, Google’s April 22 Doodle uses timelapse satellite imagery to show the real-life effects of a warming planet. From melting glaciers in Greenland and on Mount Kilimanjaro, to Australia’s dwindling Great Barrier Reef, to the drought-stricken forests of Germany, the Doodle is designed to remind viewers that climate change poses a global threat.

Lately, Google has taken its search clout seriously when it comes to educating people about climate change. Each GIF will run on Google’s homepage for several hours, and clicking on the Doodle reveals a look at all four GIFs. From there, a universe of information on climate change expands with each click.

With imagery, informative text, and links to external websites, this year’s Earth Day Google Doodle serves as a virtual classroom for a study of climate change. After clicking on the Doodle, a click on “See More on Google Earth” leads to a series of slides and videos for each GIF. An entire Earth Day could be spent exploring this most pressing theme.

One of the GIFs demonstrates what a melting mountaintop glacier looks like. Formerly part of Mount Kilimanjaro’s summit ice cap, the Furtwangler Glacier now clings to its very existence as local temperatures rise, even at 19,000 feet (5,895 meters). Over the last 100 years, almost 85% of the glacier has vanished.

Another GIF documents receding glaciers in northern Greenland. Beyond the loss of beauty, land-borne ice like this melts directly into the ocean where it contributes to rising sea levels. While some glacial growth has occurred lately in Greenland, scientists assign this to the cold water that actually derives from the melting glaciers in a feedback loop. According to NASA, there remains more melt than growth.

In another set of images, an entire forest, the Harz Forests in Germany, desiccated and gray. Satellite images taken each December from 1995 until 2020 illustrate the effects of bark beetle infestations fueled by rising temperatures and drought. The Google Earth page that accompanies this GIF provides examples of deforestation around the globe.

The final GIF uses photos from The Ocean Agency, taken between March and May 2016, to show what coral die-off looks like. Scientists calculate that the oceans absorb 93% of the heat caused by climate change. This spells bad news for coral, which bleaches in water that becomes and stays too hot. Clicking on the GIF provides an introduction to the Chasing Coral project designed to raise awareness of this critical state for coral.

Today’s Google Doodle makes a solid case for how photography can serve science and help educate the masses about the climate crisis.