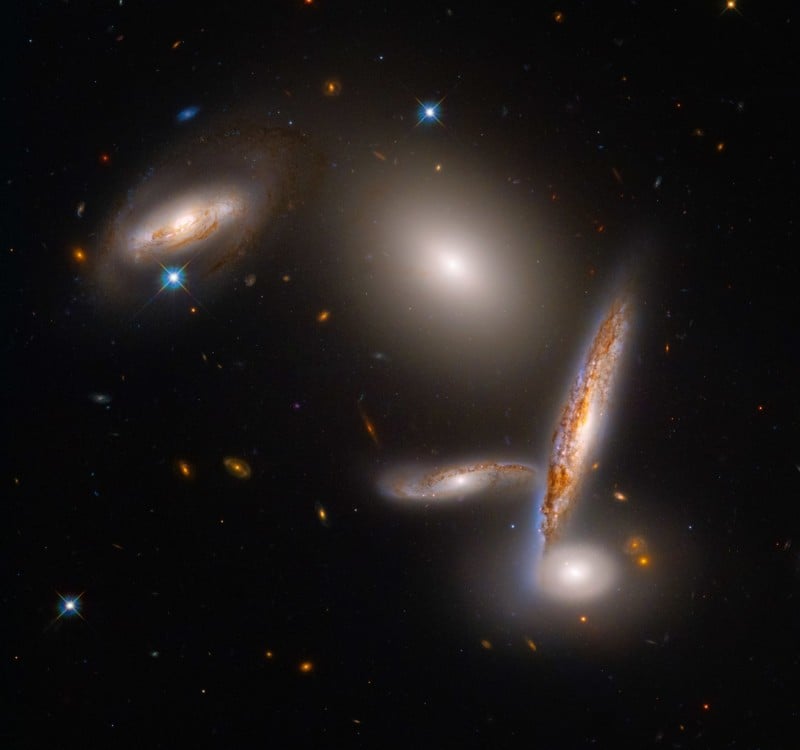 NASA is celebrating the Hubble Space Telescope’s 32nd birthday through a remarkable photo that shows a collection of five closely-knit galaxies called The Hickson Compact Group 40.

The celebratory photo includes three spiral-shaped galaxies, an elliptical galaxy, and what NASA describes as a lenticular (lens-like) galaxy. The group of five galaxies somehow crossed paths over time to create an unusually crowded single image.

NASA describes the group as caught in a “gravitational dance” and the five galaxies are so close together that they can fit in a region of space less than twice the diameter of the Milky Way.

“Though over 100 such compact galaxy groups have been cataloged in sky surveys going back several decades, Hickson Compact Group 40 is one of the most densely packed,” NASA explains.

“Observations suggest that such tight groups may have been more abundant in the early universe and provided fuel for powering black holes, known as quasars, whose light from superheated infalling material blazed across space. Studying the details of galaxies in nearby groups like this helps astronomers sort out when and where galaxies assembled themselves, and what they are assembled from.”

The Hubble Space Telescope was sent into orbit around Earth aboard the space shuttle Discovery on April 25, 1990. Since then, it has captured 1.5 million photos of around 50,000 celestial bodies and is still making new observations today. In fact, anyone can see what Hubble’s cameras are currently pointed toward at any time.

The Hubble Space Telescope is a project of international cooperation between NASA and ESA (European Space Agency). NASA’s Goddard Space Flight Center in Greenbelt, Maryland, manages the telescope. The Space Telescope Science Institute (STScI) in Baltimore, Maryland, conducts Hubble science operations. STScI is operated for NASA by the Association of Universities for Research in Astronomy, in Washington, D.C.

Hubble has made some truly incredible discoveries even in its 32nd year, despite a rough 2021 that saw its operations twice go down for extended periods of time. Hubble was able to be brought back online by NASA engineers and has been back to full operation since early December of 2021.

Just in the last month, Hubble has helped scientists photograph two record-setting celestial objects. In late March, Hubble captured a star that existed when the universe was just 7% of its current age. It is the farthest away any star has ever been photographed and its light took 12.9 billion years to reach Hubble. Just last week, Hubble made history again by capturing an image of the largest icy comet to ever be observed.

In late March, Hubble’s most used camera, the Advanced Camera for Surveys (ACS), which was installed in March of 2002, celebrated its 20th anniversary.

NASA says the massive treasure trove of knowledge about the universe that has been accumulated thanks to Hubble is stored for public access in the Mikulski Archive for Space Telescopes, at the Space Telescope Science Institute in Baltimore, Maryland.