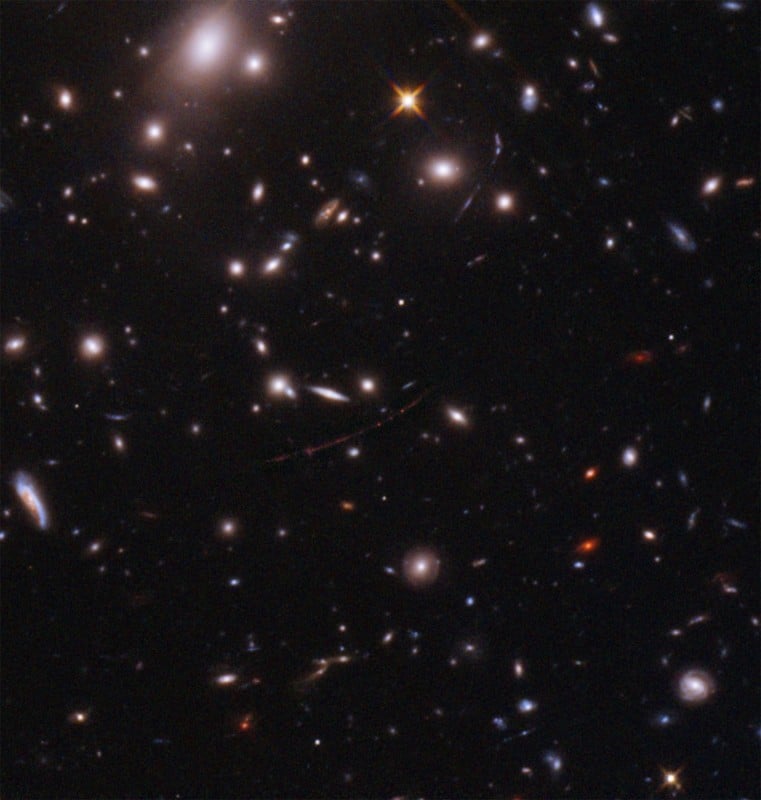 The Hubble Space Telescope has set a new record: photographing a star that existed when the universe was just 7% of its current age. The star is the farthest away any has ever been photographed, and its light took 12.9 billion years to reach Hubble.

Hubble has beaten its own record that was set in 2018 when it photographed a star that existed when the universe was about four billion years old, or 30% of its current age. This time is called “redshift 1.5,” a term scientists use because as the universe expands, light from distant objects is stretched or “shifted” to longer, redder wavelengths as it travels to us, NASA explains.

This new star exist at redshift 6.2, when the universe was just 7% of its current age, a massive leap from the previous record. The star is so far away that its light took 12.9 billion years to reach Earth.

“We almost didn’t believe it at first, it was so much farther than the previous most-distant, highest redshift star,” astronomer Brian Welch of the Johns Hopkins University in Baltimore, lead author of the paper describing the discovery (which has been published in Nature today), says.

“Normally at these distances, entire galaxies look like small smudges, with the light from millions of stars blending together. The galaxy hosting this star has been magnified and distorted by gravitational lensing into a long crescent that we named the Sunrise Arc.”

The discovery was made from data collected during Hubble’s RELICS (Reionization Lensing Cluster Survey) program, led by co-author Dan Coe at the Space Telescope Science Institute (STScI) in Baltimore.

Welch determined that one feature of the photo is an extremely magnified star he named Earendel, which means “morning star” in Old English. The discovery is believed to be the start of an uncharted era very early star formation.

The astronomers say that Earendel is estimated to be at least 50 times the mass of the Sun and millions of times as bright, which would make it one of the most massive stars currently known. NASA explains that despite its massive size, it still would not be visible across these vast distances without the help of gravitational lensing. It was magnified by a large galaxy cluster calle WHL0137-08, which sits between Earth and Earendel. Because the galaxy’s gravitational mass is so great, it warps the fabric of space and creates a powerful magnifying glass that distorts but also greatly amplifies the light from distant objects behind it.

NASA explains that thanks to a rare alignment of WHL0137-08, Earendel appeared nearly directly on a ripple in the fabric of space. This “caustic” ripple provided maximum magnification and brightening. “Caustic” light is what can be seen on the base of a pool, where it acts as a magnifying glass and focuses sunlight to maximum brightness.

“This caustic causes the star Earendel to pop out from the general glow of its home galaxy. Its brightness is magnified a thousandfold or more,” NASA explains. “At this point, astronomers are not able to determine if Earendel is a binary star, though most massive stars have at least one smaller companion star.”

Further Examination with Webb is Planned

This is not the last time that Earendel will be studied. NASA confirms that the James Webb Space Telescope, which should begin its first observations this summer, will also observe the distant star.

“With Webb we expect to confirm Earendel is indeed a star, as well as measure its brightness and temperature,” Coe says. “We also expect to find the Sunrise Arc galaxy is lacking in heavy elements that form in subsequent generations of stars. This would suggest Earendel is a rare, massive metal-poor star.”

Astronomers are eager to learn more about Earendel, as it was formed before the universe was filled with the heavy elements produced by successive generations of massive stars.

If follow-up studies find that Earendel is only made up of primordial hydrogen and helium, it would be the first evidence for the legendary Population III stars, which are hypothesized to be the very first stars born after the big bang. The likelihood of this is, however, small but is nonetheless exciting for the researchers.

“With Webb, we may see stars even farther than Earendel, which would be incredibly exciting,” Welch says. “We’ll go as far back as we can. I would love to see Webb break Earendel’s distance record.”