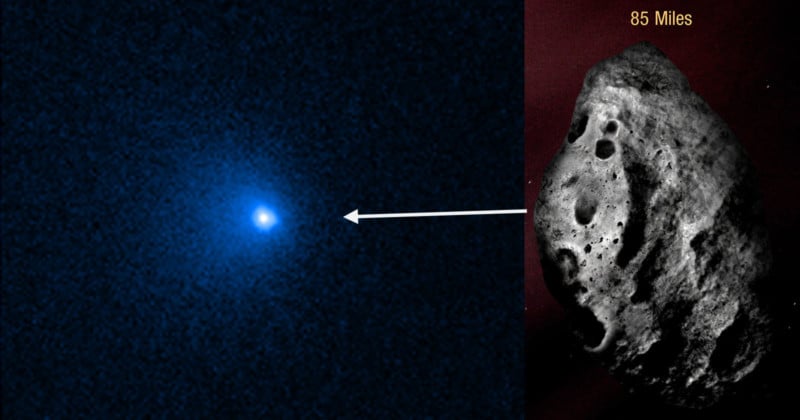 NASA’s Hubble Space Telescope has captured the largest icy comet ever observed by astronomers. With a diameter of about 80 miles across, it is 50 times bigger than most known comets and it is headed directly towards Earth.

The massive comet is named C/2014 UN271, otherwise known as Comet Bernardinelli-Bernstein, and is flying towards Earth at a blistering 22,000 miles per hour from the edge of the solar system. NASA says that while the comet is heading in this direction, it will never get closer than 1 billion miles away from the Sun, or just slightly farther than the distance between Earth and Saturn. It also won’t reach that closest point to Earth until 2031.

The Largest Comet Ever Observed

With its approximately 80 mile width, bests the previous record-holder C/2022 VQ94 which was discovered in 2022 by the Lincoln Near-Earth Asteroid Research (LINEAR) project and had a nucleus of about 60 miles across. For reference, Comet Neowise is only about three miles across and Halley’s Comet is seven miles across.

Comet C/2014 UN271 was discovered by astronomers Pedro Bernardinelli and Gary Bernstein in archival images from the Dark Energy Survey at the Cerro Tololo Inter-American Observatory in Chile. The comet was first observed in November of 2010 when it was three billion miles from the Sun, or about the average distance of Neptune from Earth. Since then, astronomers have been studying it from both ground and space-based telescopes. While observed over a decade ago, its actual size was not able to be confirmed until very recently.

The diagram above compares the size of the icy, solid nucleus of comet C/2014 UN271 (Bernardinelli-Bernstein) to several other comets. NASA says that the majority of comet nuclei observed are smaller than Halley’s comet and are typically a mile across or less.

“This is an amazing object, given how active it is when it’s still so far from the Sun,” the paper’s lead author Man-To Hui of the Macau University of Science and Technology, Taipa, Macau, says. “We guessed the comet might be pretty big, but we needed the best data to confirm this.”

Separating the Nucleus from the Coma

NASA says that determining the actual size of a comet can be challenging because it is often difficult to discern the nucleus of the object from the massive dusty coma that surrounds it. For now, only the Hubble Space Telescope has the sharpness and sensitivity to make a definitive estimate of the size of the nucleus, but it is still too far away for it to be resolved by Hubble’s cameras alone.

Hui and his team used Hubble to capture five photos of the comet on January 8, 2022. The storied space telescope was able to show a bright spike of light at the center of what it could see, which indicates the location of the nucleus. They then made a computer model of the surrounding coma and adjusted it so that it fit with the new Hubble images. They then subtracted it from the Hubble images to get a photo of the nucleus.

The team compared this result with the brightness of the nucleus observed from the Atacama Large Millimeter/submillimeter Array (ALMA) in Chile in order to obtain a more accurate measurement of its diameter as well as its reflectivity. What they discovered is that the comet’s size is close to what was previously estimated from ALMA, but that it is also a very dark coment — much darker than they previously believed. Not only is it big, but it’s also blacker than coal.

“This comet is literally the tip of the iceberg for many thousands of comets that are too faint to see in the more distant parts of the solar system,” David Jewitt, a professor of planetary science and astronomy at the University of California, Los Angeles (UCLA) and co-author of the new study in The Astrophysical Journal Letters, says.

“We’ve always suspected this comet had to be big because it is so bright at such a large distance. Now we confirm it is.”

NASA says that Comet Bernardinelli-Bernstein has been moving towards the Sun for well over a million years and is hypothesized to have originated from a “nesting ground” of trillions of comets called the Oort Cloud. The comet follows a three-million-year-long elliptical orbit that takes it as far away from the Sun as roughly half a light-year. Now, it is less than two billion miles from the sun and falls nearly perpendicular to the plane of Earth’s solar system.

At such a distance, the temperature around the comet is a chilly minus 348 degrees Fahrenheit, which is warm enough for carbon monoxide to sublimate off the surface and create the dusty coma that surrounds it.