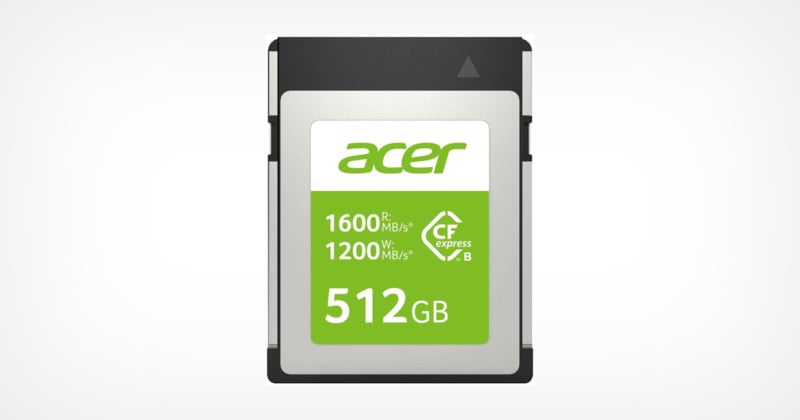 Acer, a brand more well known for personal computers, parts, and accessories, has quietly jumped into the photography market with the launch of a line of CFexpress memory cards.

Acer Storage, an official licensee of the Acer brand that produces memory and storage products that are designed, manufactured, and marketed by BIWIN Storage Technology, has announced a line of CFexpress Type B memory cards in three capacities: 128 GB, 256 GB, and 512 GB.

The cards use what Acer describes as “industrial grade” NAND flash and promises that all products go through rigorous testing before they leave the factory. The cards are “completely sealed” and are magnet proof, X-ray proof, UV-guarded, and resist static which the company says reduces accidental damage and ensures file security.

The company says the cards have up to 1,200 MB/s write speeds and up to 1,600 MB/s read speeds. As such, Acer touts it as able to handle the capabilities of “next-generation cameras” and keep up with both 4K and 8K RAW video workflows. Like all CFexpress cards, Acer’s cards are backward compatible with select cameras that use the XQD format as long as the manufacturer has updated the camera’s firmware to do so. Acer specifically notes that the cards are compatible with the Panasonic S1R and S1, Canon C500 Mark II, C300 Mark III, EOS R5, and 1DX Mark III, and Nikon Z6 II, Z7 II, D6, D5, D500, D850, Z6, and Z7 cameras. 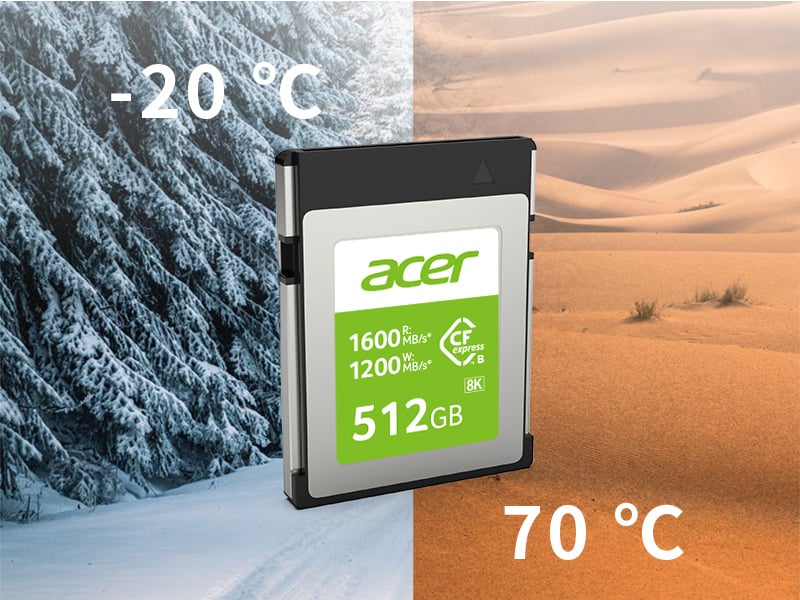 In addition to speed, Acer says the new CFexpress memory cards are resistant to extreme temperatures and are therefore ideal for outdoor photography. The cards can endure temperatures as low as -20 degrees up to as high as 70 degrees Celcius (-4 degrees to 158 degrees Fahrenheit). The cards are also protected with a five-year warranty, which is longer than most others in the industry.

The Acer Storage CFexpress memory cards don’t come cheap but are competitively priced. They start at $130 for 128GB, $270 for 256GB, and $460 for 512GB and are available on Amazon. To frame that against the competition, SanDisk’s 512GB CFexpress card costs $500, while ProGrade Digital caps out at 256GB and sells it for $290 (on sale). That said, both SanDisk and ProGrade claim faster transfer speeds of 1,700 MB/s and 1,750 MB/s respectively. Angelbird is an outlier and is only asking $180 for its 512GB CFexpress card, which it also rates as the fastest of the group and promises up to 1,785 MB/s.