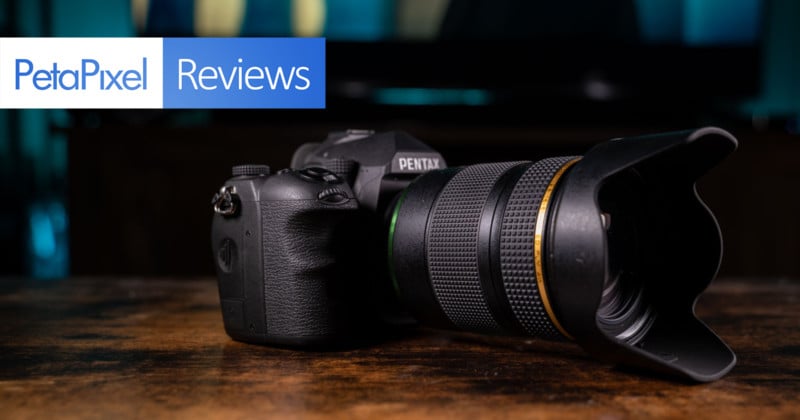 Last year, Ricoh Imaging released the Pentax K-3 Mark III, which proved to be an excellent (yet expensive) DSLR. Ricoh says the Pentax-DA* 16-50mm f/2.8 ED PLM AW is the “ultimate general professional-grade zoom lens” for APS-C DSLR systems like the K-3 Mark III, and I have to say it lives up to that.

The $1,297 K-mount 16-50mm f/2.8 lens joins an existing lineup of lenses with the DA designation, with this revamp of the Pentax DA 16-50mm f/1.28 ED AL SDM being entirely redesigned from the ground up to match the performance demands of the K-3 III system. These updates include new weatherproof construction, focus-motor, and an entirely new optical formulation. Since the K-3 Mark III had such a significantly improved autofocus system, the company says it needed a lens that could leverage those updates to maximize its potential. The fact that the 16-50mm (35mm equivalent) focal range makes for a great everyday general use or walkabout lens is just an added bonus.

In a time when every camera company is trying to make things smaller and lighter, the Pentax HD DA 16-50mm almost feels like a step backward in time. At a glance, the lens resembled the older style Tamron and Sigma lenses that I was using over a decade ago. It is both surprisingly large (almost as big as a 24-70mm f/2.8) and heavy (1.65 pounds) compared to many of the smaller systems I have been testing over the last year. Once I got over that initial shock, the quality of the design began to speak for itself. 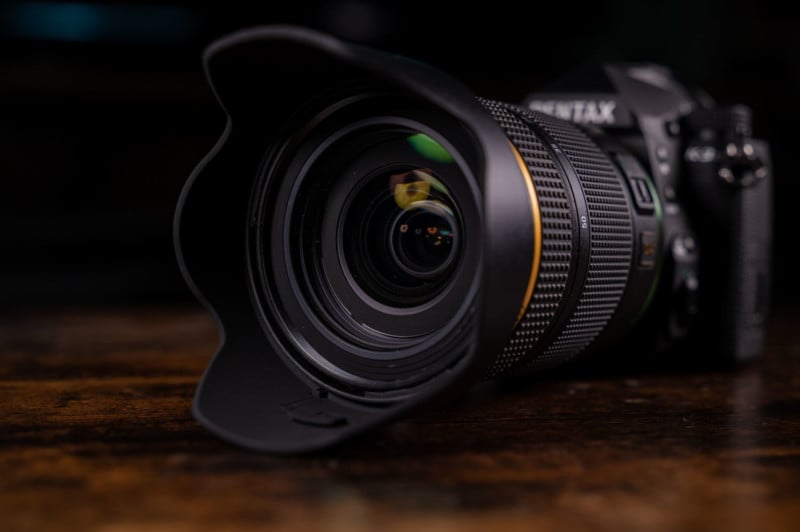 The lens features a constant f/2.8 wide-open aperture through the focal range with f/22 at the other extreme. The 4.6-inch long lens kind of balances perfectly on the K-3 Mark III DSLR, making for a surprisingly balanced system when shooting handheld. Yes, it was heavier than I have been used to shooting since I’ve moved over to mostly mirrorless over the last couple of years, but combined with the ergonomics of the camera and the nice balance on the system as a whole, the shooting experience was actually pretty comfortable despite the additional weight.

The barrel of the lens consists of a solid metal body with a durable-feeling rubber ring surrounding the focus and zoom wheels, making for an overall pleasing feel and experience when shooting. It was almost impossible to have a “bad grip” on the lens as the texture of the control rings made it easy to maneuver from any angle. The resistance was smooth and the tension in the rings was rigid enough to provide little to no drifting. Even when the lens was aimed downwards, gravity had next to no effect on the zoom of the lens.

The only thing I did not quite like about the lens design was the zooming feature, as the lens extends about two inches at the 50mm focal range. While the system claims to, and appears to be incredibly well weather-sealed, I’ve grown accustomed to working with more internal zoom lenses which made me concerned about balancing, as well as the possibility of dust/dirt/moisture entering the lens through the small gap on the barrel. This isn’t an issue specifically with Pentax, as just about every lens manufacturer is producing lenses with variable length, but I still wish it had internal zooming. 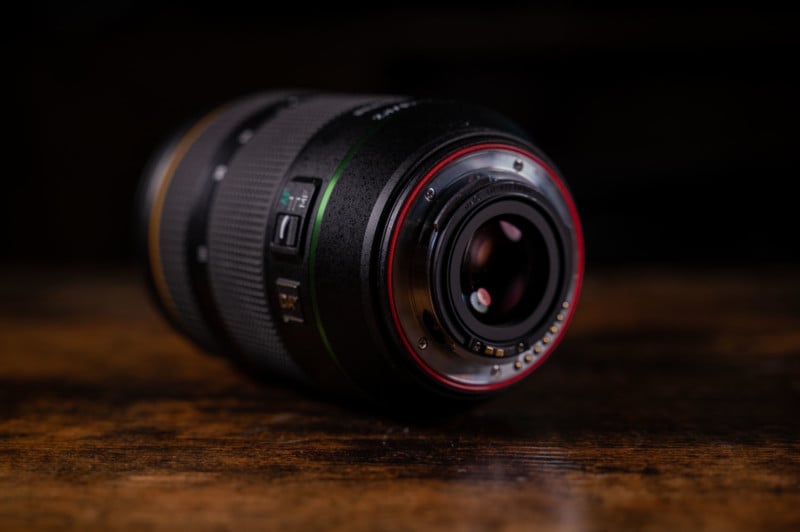 It is worth pointing out that this lens has a KAF4 mount, which means that while it can still connect to any other existing K-mount system, the focus and aperture control will only be available on newer Pentax DSLR systems. Likely this will be frustrating to longtime Pentax users with older K-mount cameras, but it does mean that moving forward the company can simplify the lens mechanics and possibly create better and more effective weather-sealing. 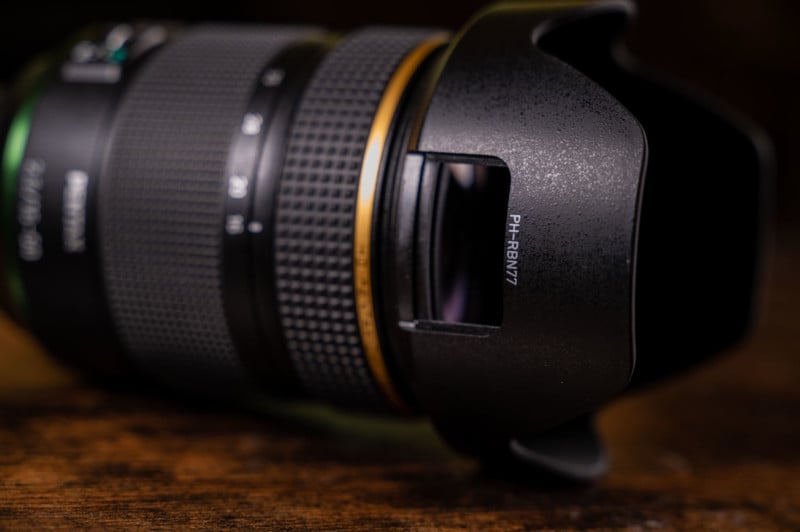 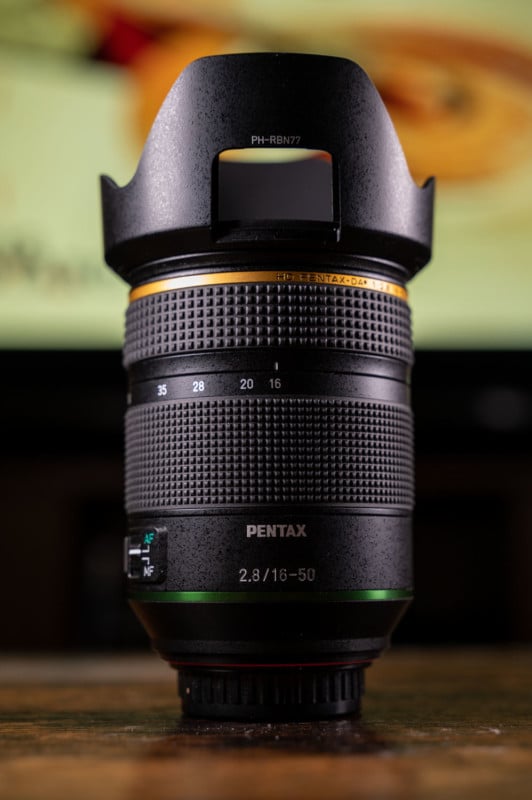 Lastly, the lens features a standard 77mm thread for filters, and the lens hood has a removable window at the bottom to make adjusting circular polarizers or similar filters and accessories easier. 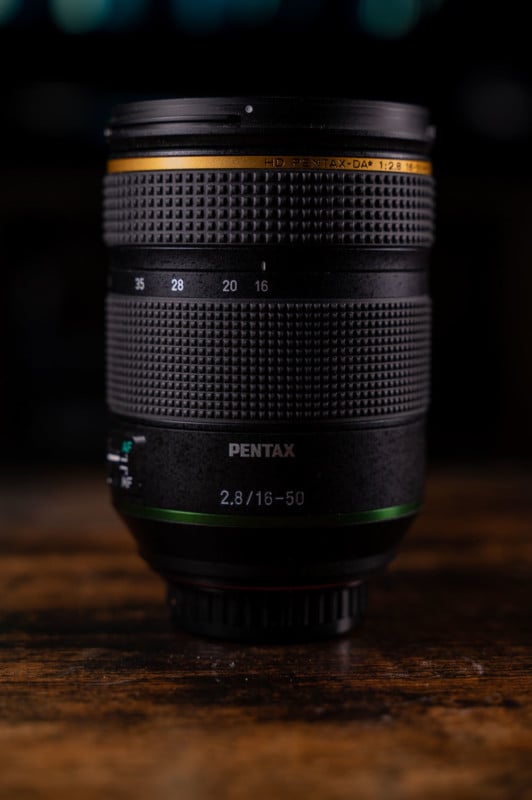 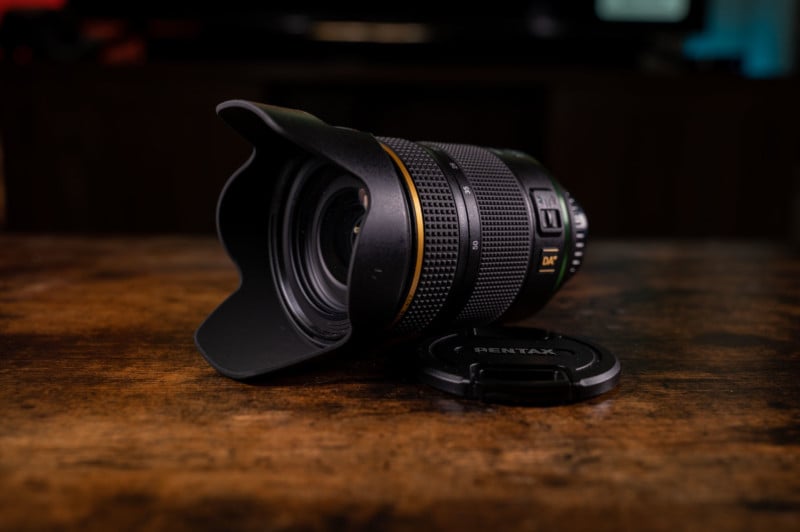 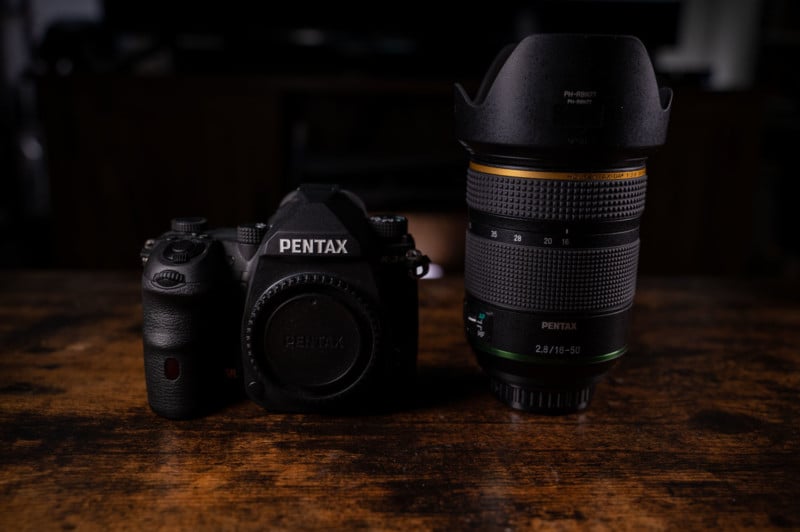 Right off the bat, I was impressed with the noticeable speed improvement on this lens compared to other Pentax lenses I have shot with in the last few years. The Pentax 16-50mm f/2.8 ED PLM AW leverages a Pulse-Linear-Motor that the company says can move lens elements extremely quickly and precisely to achieve critical focus. While I was not able to test this with really challenging or fast-moving subjects, I will say that during my time with the lens it, in general, proved to be accurate, fast, and reliable.

The lens can snap to focus through a selected point via the touch screen on the camera or via a zone, or even “manually” with the ring itself, very quickly. While pretty quiet, I will say that there is a very subtle noise that you can discern from the focus motor that could be noticed and picked up when shooting video, so videographers should bear this in mind. 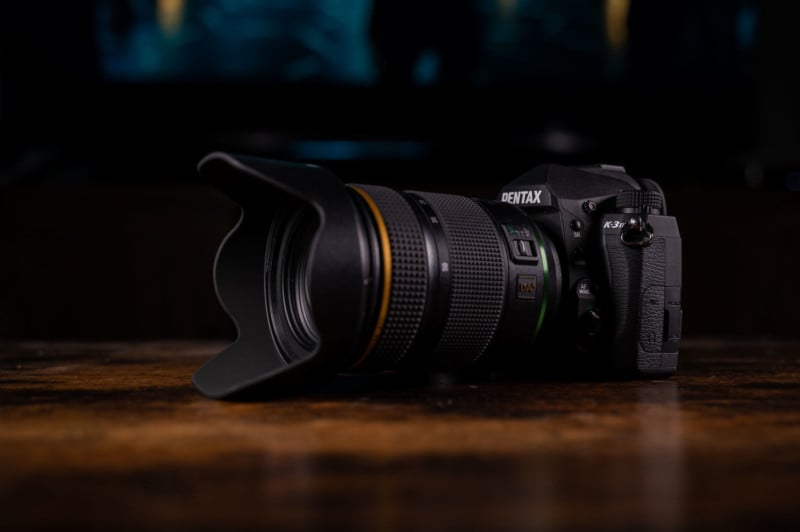 When paired with this lens, the autofocus on the K-3 Mark III was by far, the fastest I have ever experienced with a Pentax system. Finally, the improvements the company boasted about with the K-3 Mark III are actually noticeable in the real world.

In good light, the autofocus can snap onto the target almost instantly. In low light, this speed only slightly slower, even in high contrast situations. In my testing, focus speeds were consistent across the full range of f/2.8 to f/22, with every test seeing the lens and camera combination taking less than half a second to grab onto my targets when pushing the focus to catch a subject from the most extreme opposite side of the range.

The lens is missing image stabilization, and while the new Pentax DSLRs all feature IBIS, it would have been nice for the lens to have its own shake-reduction that could pair with the camera body for a few extra stops. 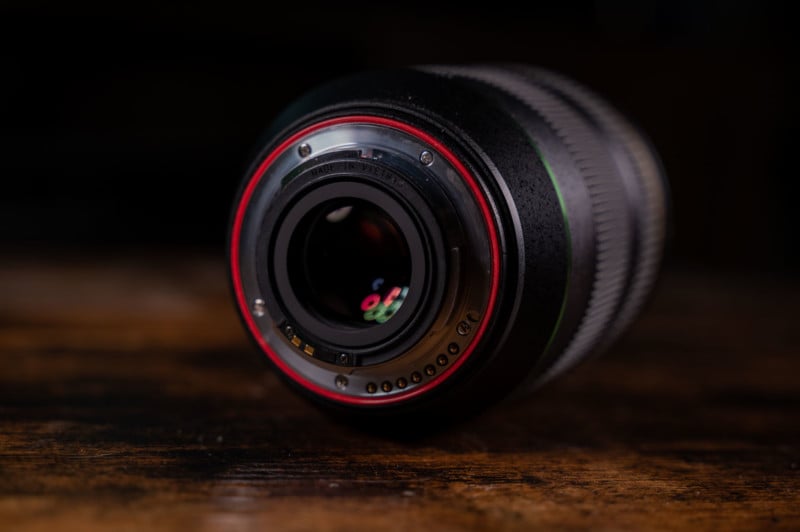 Overall, the lens makes for a great everyday use optic, and provides utility for portraits, landscape, cityscape, events, and even street photography.

According to Pentax, the 16-50mm f/2.8 DA lens uses an entirely new optic design to leverage the 26 megapixel K-3 III body, providing users with minimal aberration at both minimum and maximum focal lengths and apertures. Is it perfect? No, but it is really good. This design is apparently the reason for the lens’s slightly larger (retro) design and size.

Unlike some of the previous Pentax lenses I have reviewed, there really was not any ghosting in my shots, and the chromatic aberration and distortion were rather minimal. On pretty much all zoom lenses, there is bound to be some distortion and vignetting, and that continues to be the case to some degree on the Pentax 16-50mm f/2.8 DA lens. Once you started shooting in the 35mm to 50mm range, the vignetting and distortion were practically gone. However, while these “defects” are quite improved from the previous generation of Pentax lenses, they are still present and somewhat noticeable when shooting into the sun, and at the widest focal length.

The bokeh patterns were smooth and pretty solid round patterns. While not the “creamiest” I have ever seen, they are still pleasant enough for an everyday lens and are able to help create some nice portraits and product shots. On top of this, the color renditions from the lens and K-3 III camera were quite pleasing and true to real life in most of the images I managed to capture, with only the ones showing some extremely high contrast or very low-lit situations needing to have some color adjustments made.

Below are some additional sample images taken with the lens. 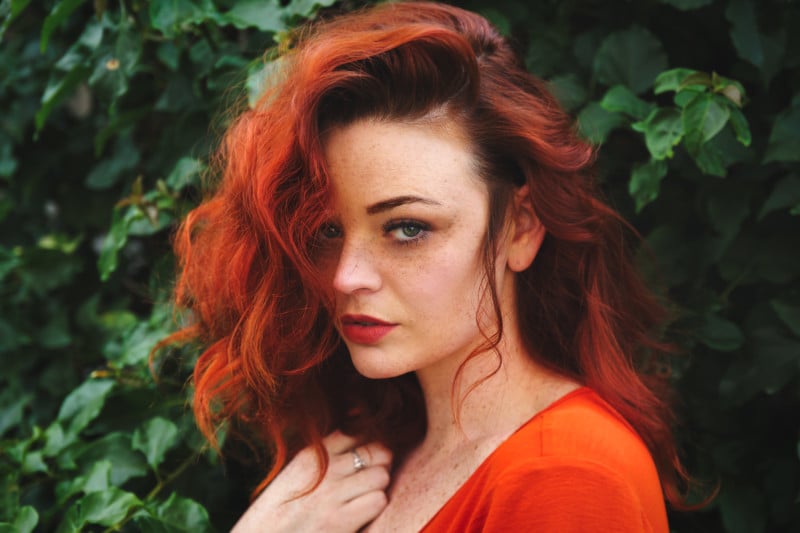 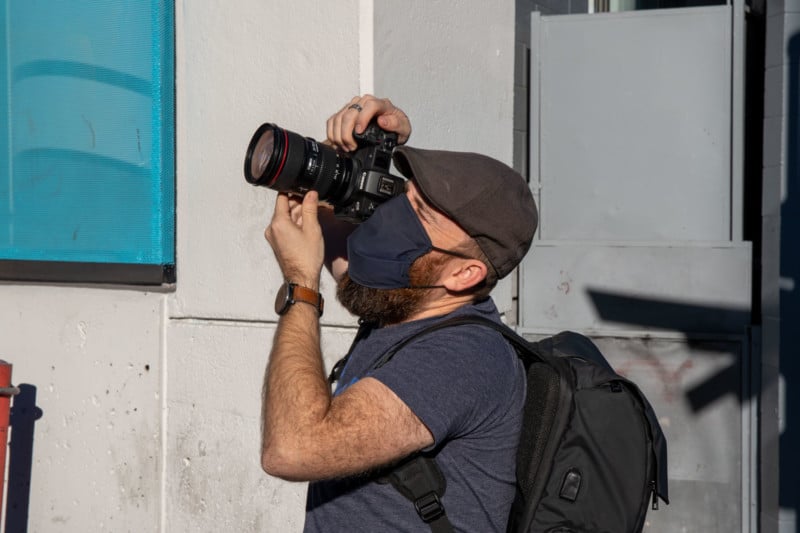 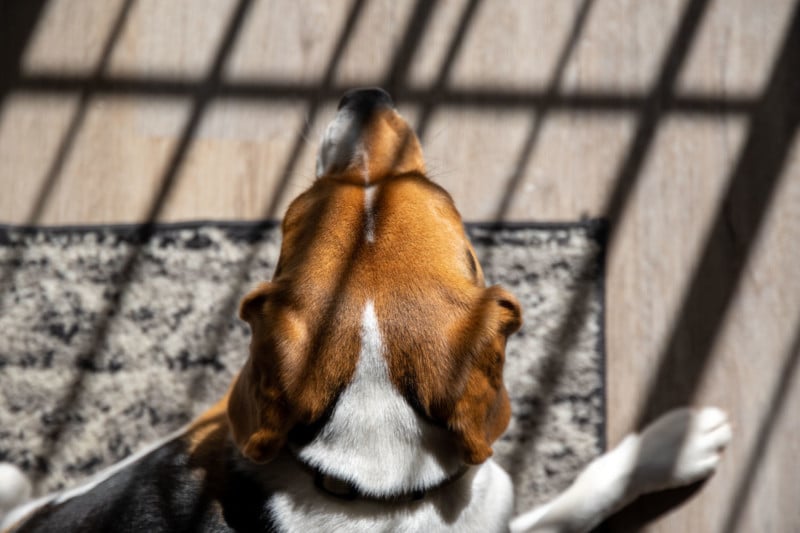 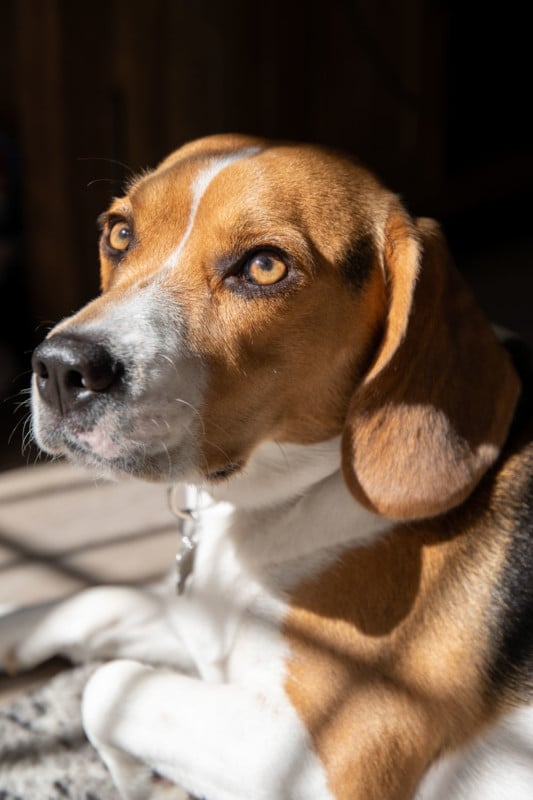 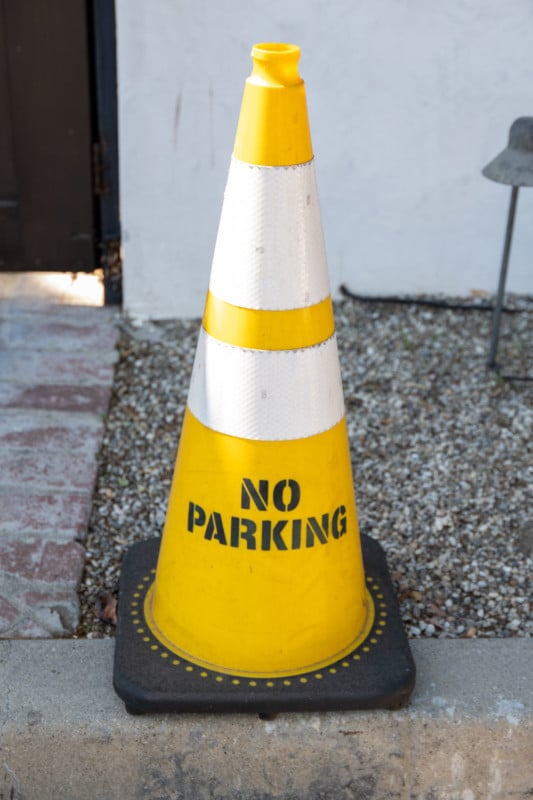 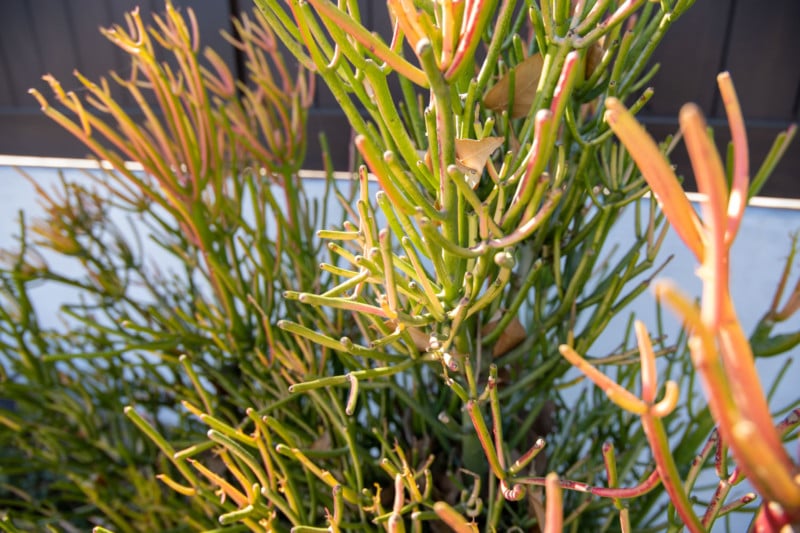 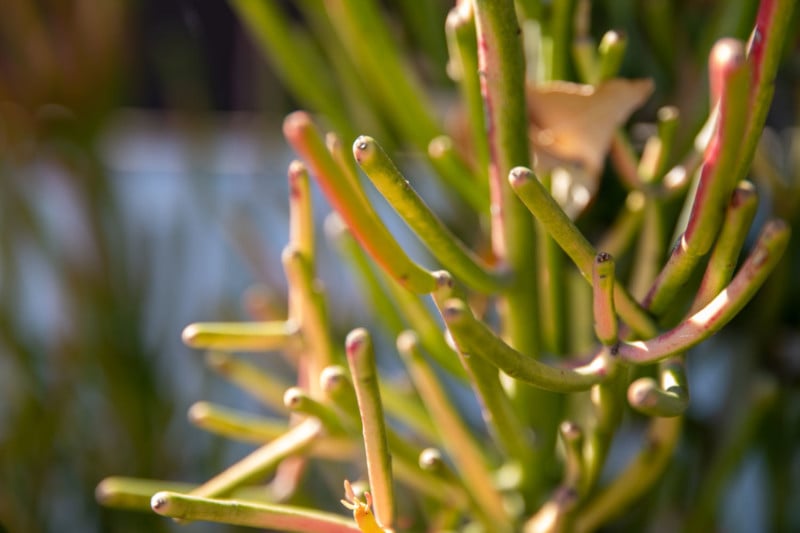 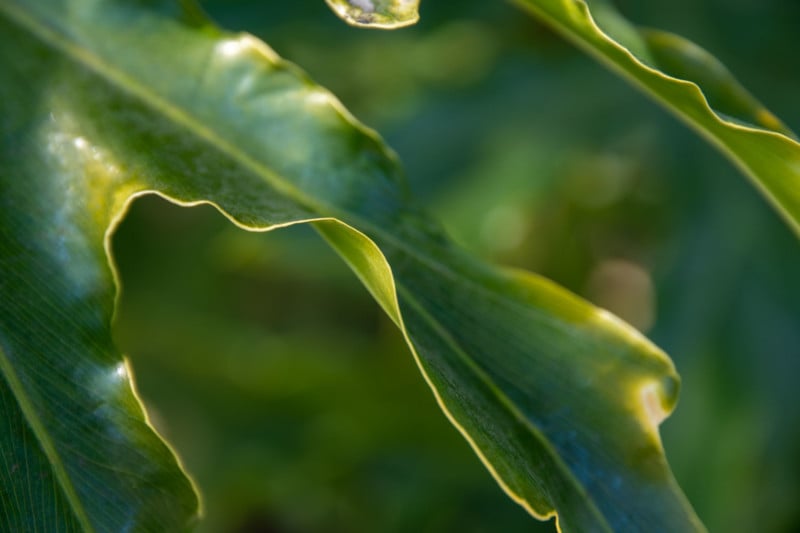 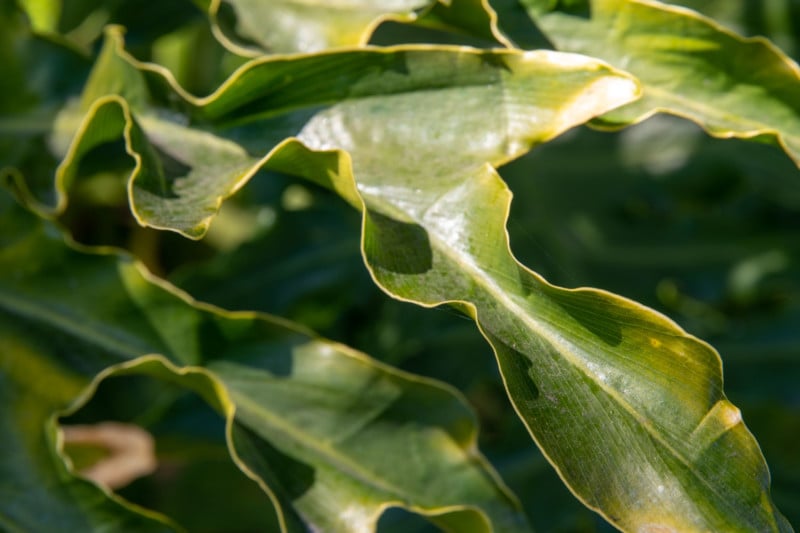 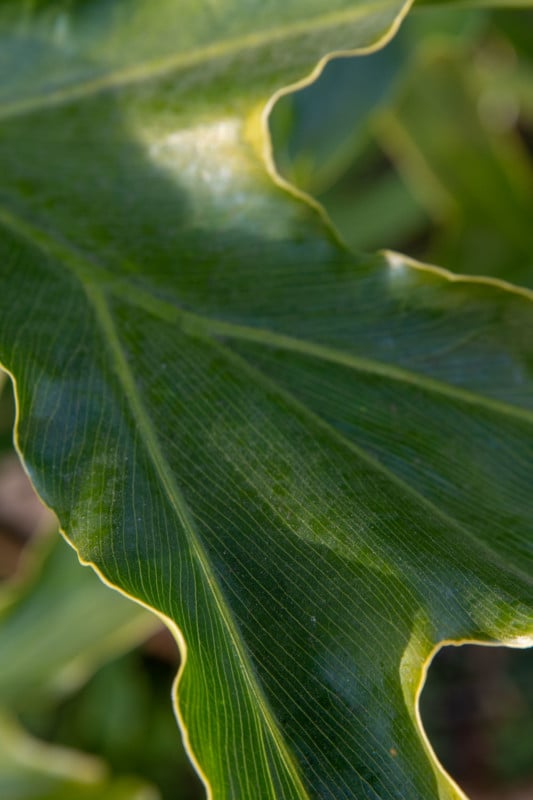 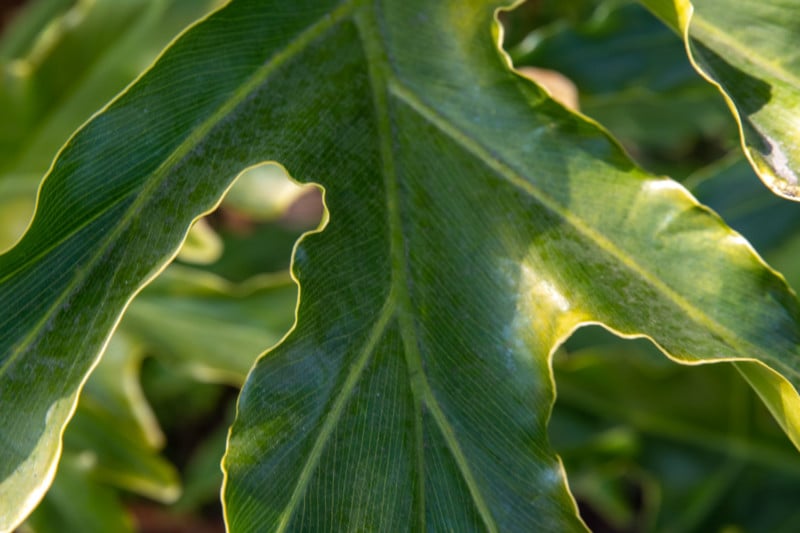 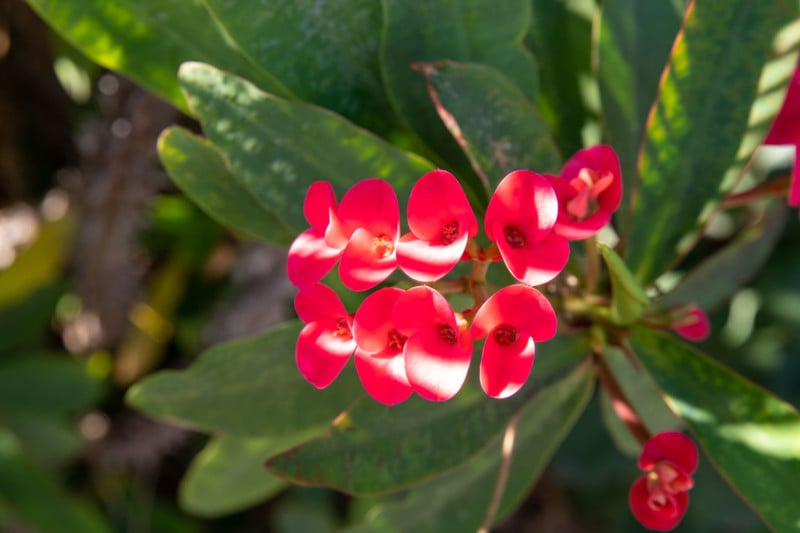 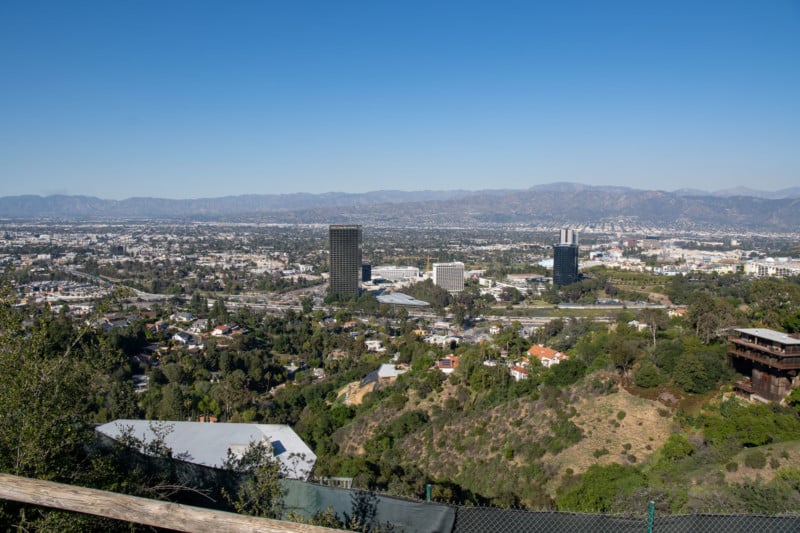 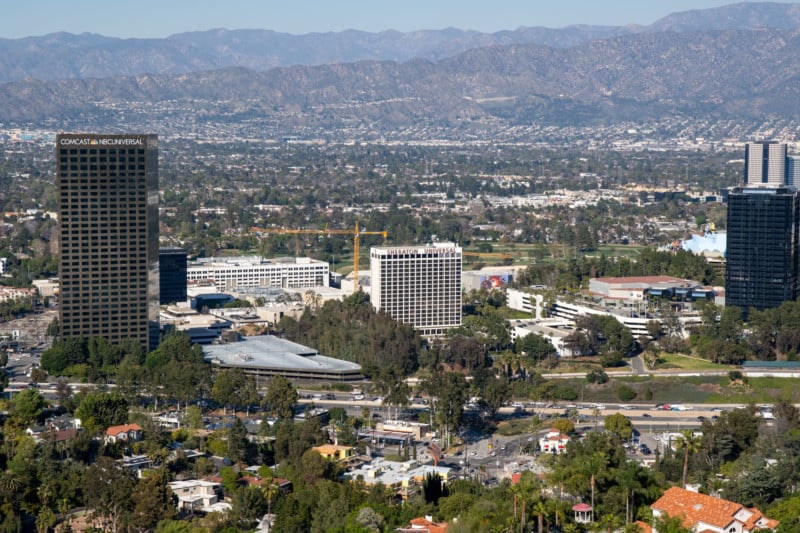 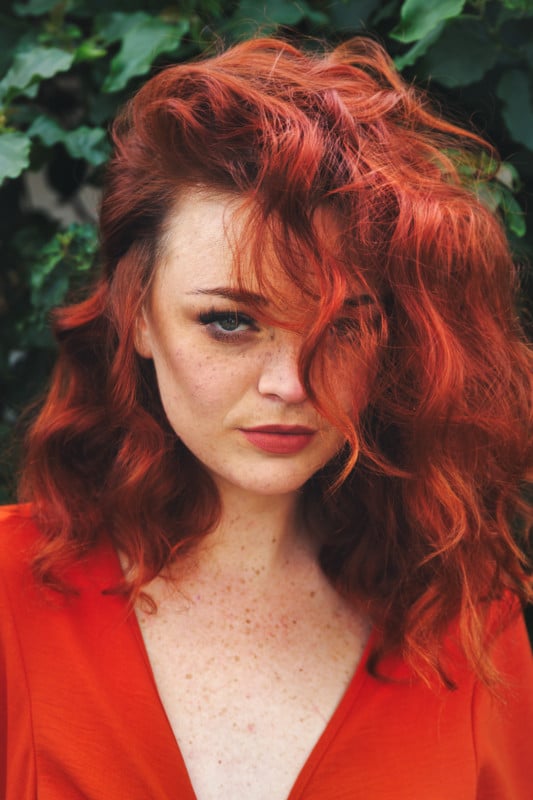 The Pentax HD DA* 16-50mm f/2.8 PLM WR lens is designed to deliver the best performance of any zoom lens Pentax has made to date, and the constant f/2.8 aperture makes it a versatile lens that has been significantly improved optically and in responsiveness over its predecessor. The only real downsides of this lens would be its size and weight — as it is nearly 25% larger than its predecessor — its higher price, and the fact the lens is designed pretty much specifically for the newer K-3 Mark III, which means Pentax shooters with older generations of cameras will have to upgrade their entire system to be able to enjoy this new lens.

Through the course of my testing, while bulky, it is clear the lens will be a welcome addition to anyone who picked up the K-3 III DSLR though, and it’s actually able to leverage all of the available technology within the new camera. 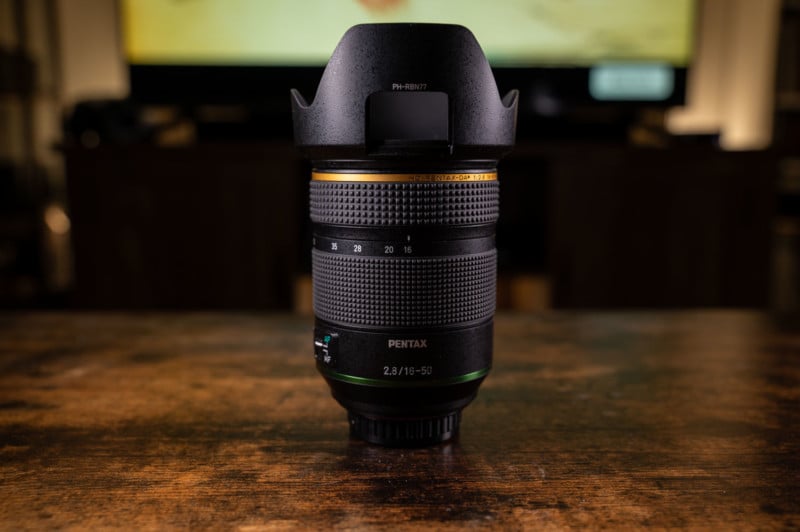 For K-mount, there are unfortunately no real alternatives that can provide the same image quality and autofocus responsiveness. The previous generation SMC DA 16-50mm f/2.8 ED AL IF SDM lens is an option for those simply seeking the focal range and aperture and only costs about $719. However, the availability of this lens seems to be scarce and again, it offers much less when compared to the $1,297 DA 16-50mm f/2.8 ED PLM AW version.

Yes, if you are a Pentax K-3 Mark II owner as most of the improvements will be lost connected to any other Pentax system. But for K-3 Mark III users, it’s a stellar lens and an ideal combination with Pentax’s latest camera.

Update: The original version of this review incorrectly equated internal zoom and internal focus. This has been corrected.