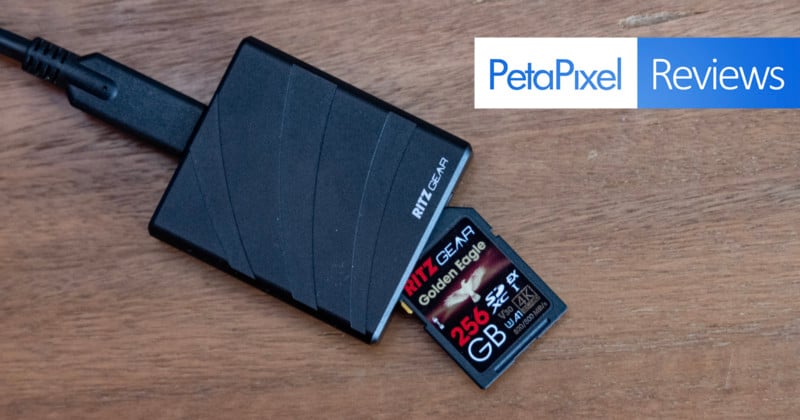 After reading my story on its $300 SD Express card, Ritz Gear reached out and insisted that I try it for myself. The company even included an SD Express card reader in an attempt, I assume, to show its value. After testing, I am at a loss: this is so much worse than I ever thought it could be.

There are few journalists who beat the “Beware of SD Express” drum as loudly or as frequently as I do, because it’s not seen as a particularly “sexy” topic to discuss. It’s just memory cards, and in this case we’re talking about a format that isn’t really supported right now anyway. So why does it matter, right?

Well, it matters because there are a surprising number of folks who insist that it’s a good format, despite some issues that will surely be ironed out over time (spoiler: no they will not). You know, the fact that no camera manufacturer has signed on to use the specification and that, despite some laptops claiming support, the claims of backward compatibility are extremely misleading because SD Express will never work faster than UHS-I in any non-SD Express device. Nope, that doesn’t matter: without fail, someone will crawl out of the woodwork and tell me I’m wrong.

Also, most consumers are woefully underinformed about what they should be looking for in a memory card. They’ll see some specifications on a box and assume everything is on the up-and-up and hunky-dory. In the case of SD Express, everything I have been told by multiple industry experts backs the idea that it’s a dead format with no future. 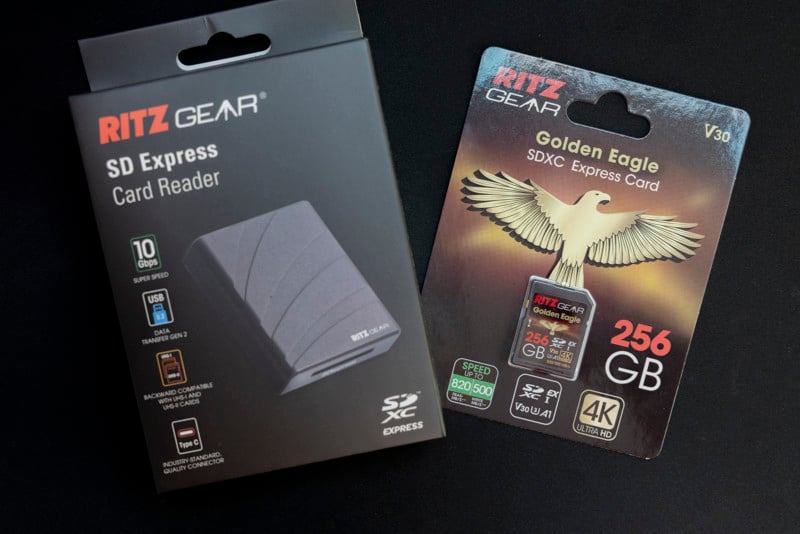 But hey, look, I’m willing to be wrong. I’m more than happy to test a product, see the light, and amend my point of view. That’s why when Ritz Gear reached out to let me try its $300 SD Express card and SD Express reader, I was game. I’m happy to test it and try and see where it might have value, especially if it lives up to those transfer speeds on the box. I mean, I’ve seen CFexpress cards that can get as fast as Ritz Gear is claiming, so it’s not unheard of.

Oh boy, was I in for a surprise, however. Not only would this card already have limited utility even if it worked as advertised, it doesn’t. Not even close. Not even in the same ballpark, area code, or on the same continent.

Before I show you the results, I want to first explain what my expectations were for this card. As stated on the box, Ritz Gear claims that this card is capable of up to 820 MB/s read speeds and 500 MB/s write speeds. That’s fast. It’s faster than pretty much anyone using an SD format card could possibly need. I’ve already explained why this, then, doesn’t compute with the card only being rated as V30, but I was willing to give it the benefit of the doubt.

See, no camera actually supports the SD Express format, so I figured that the speed promises on the packaging were specific to use with an SD Express card reader and that the V30 note was because Ritz Gear knows that no camera can actually take advantage of the card at anything higher than UHS-I speeds, making V30 the cap despite the actual possible ceiling for the product.

So before I tested it, I was under the assumption that I would see some stellar speed results from my computer through Blackmagic’s Disk Speed Test tool but would also not be able to get much out of the card when I put it into a camera.

What actually happened managed to surprise me.

Below is the test from a ProGrade Digital SD card reader, which supports UHS-II speeds. I decided to try the Golden Eagle card in this first to verify that SD Express can’t operate at faster than UHS-I speeds outside of an SD Express reader. 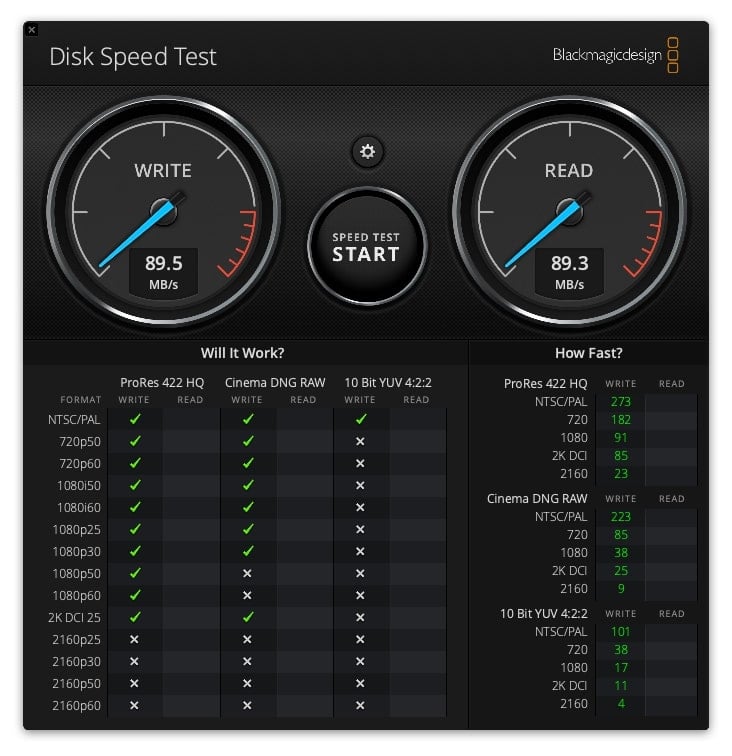 Verified. The card is about as slow as I expected.

Next, I swapped it with the SD Express reader that Ritz Gear provided. As a note, I am using 100% Ritz Gear provided equipment here: The card, reader, and cable were all included. This test was performed on a top-of-the-line 2021 Macbook Pro with M1 Max: 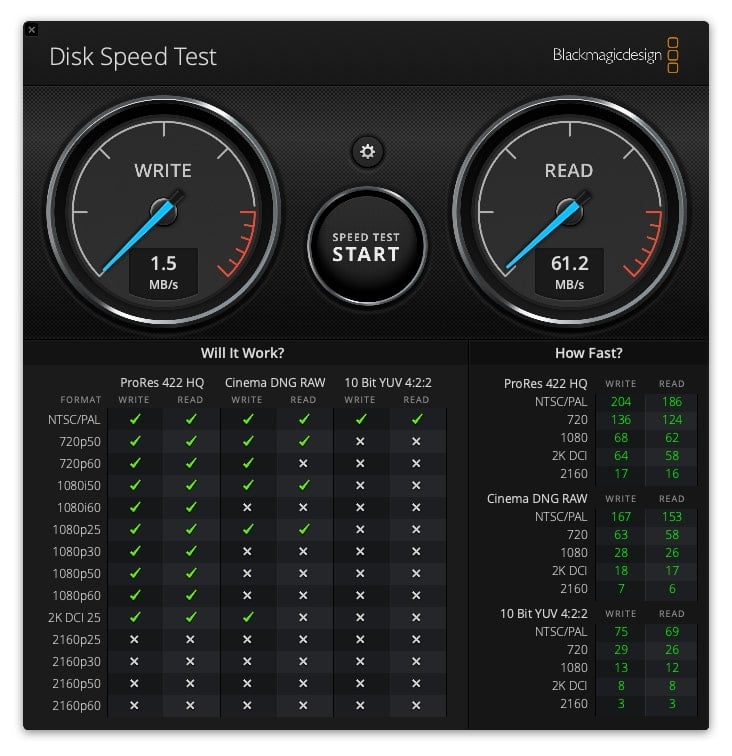 These are atrocious results. I actually did see the write speeds peak into the 60 MB/s range during the test, but it always dropped back to under 2 MB/s when it finished and reported sustained speed.

To evaluate the performance of the reader itself, which the box touts as backward compatible with both UHS-I and UHS-II SD cards, I took a high-performance Sony SD card and ran it through the Ritz reader: 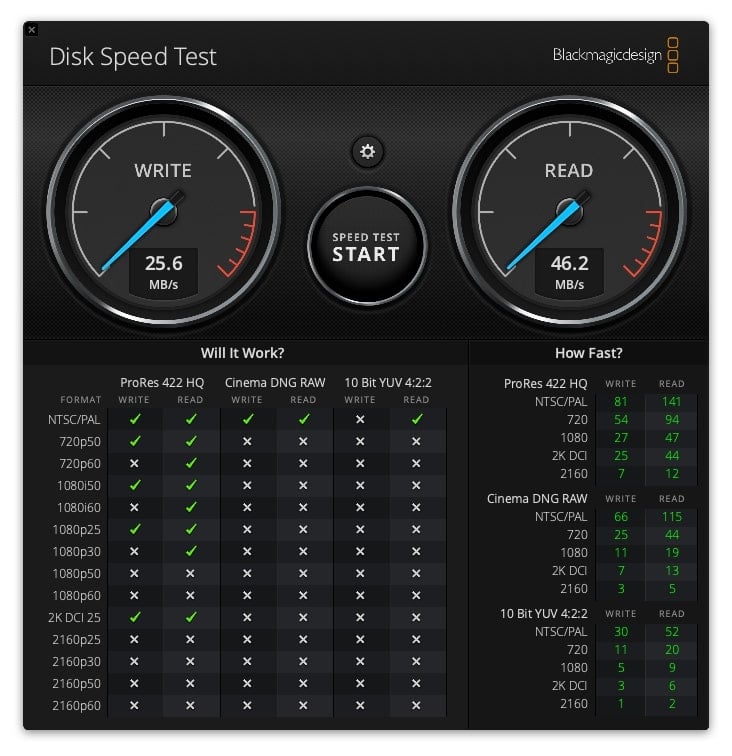 Evaluating a memory card with performance this inconsistent is new to me, so I decided to take things one step further. I would see how long the card could sustain a 4K video recording from a Canon EOS R5 and then also test how long it would take to move footage from the card onto a computer, both that 4K video recording.

I would then compare this to how long it would take to do the exact same thing with a regular UHS-II memory card, namely a Sony V90 SD Card through a high-end ProGrade Digital UHS-II reader.

This is where things get a bit confusing. In the first recording session with the card, which is the first time any data was written to it, the Golden Eagle performed pretty admirably. My EOS R5 was set to record in normal (not high quality) 4K (3,840 x 2,160) at 24 frames per second. I was pleasantly surprised to find that it managed to record continuously for 34 minutes before the camera presented a warning that it needed to stop due to the speed of the card.

That’s really not bad, and I was starting to question my results from the previous tests and soften my opinion of the card. Perhaps, I thought, it’s not quite as terrible as I believed. Perhaps, I had treated it too harshly. This feeling did not last long.

On subsequent tests, the card was never able to record at those same settings for more than 10 seconds. At 4K in High Quality, it couldn’t even last four seconds. It sputtered out in less than three seconds when I tried to up the ante and record a 4K clip at 60 frames per second.

This product doesn’t make any sense. I went over the data from our tests with an industry expert and he was just as stumped. While he was admittedly less familiar with the SD Express specification because no camera manufacturer has expressed even slight interest in supporting the format, he couldn’t explain why the card would act like it did in the R5.

It’s not uncommon for an older, heavily used card to exhibit issues where it will start to lose speed. The more a card is used, the more worn down it gets. But to see that kind of reaction in back-to-back tests of a brand new card inside of an hour was inexplicable.

That was before we even get to how much the 820 MB/s promised speed is totally incongruous with the V30 spec on the box.

So, totally confused, I reached out to Ritz Gear to see if there was a possible explanation. As it turns out, there is, but it’s not what I was expecting. 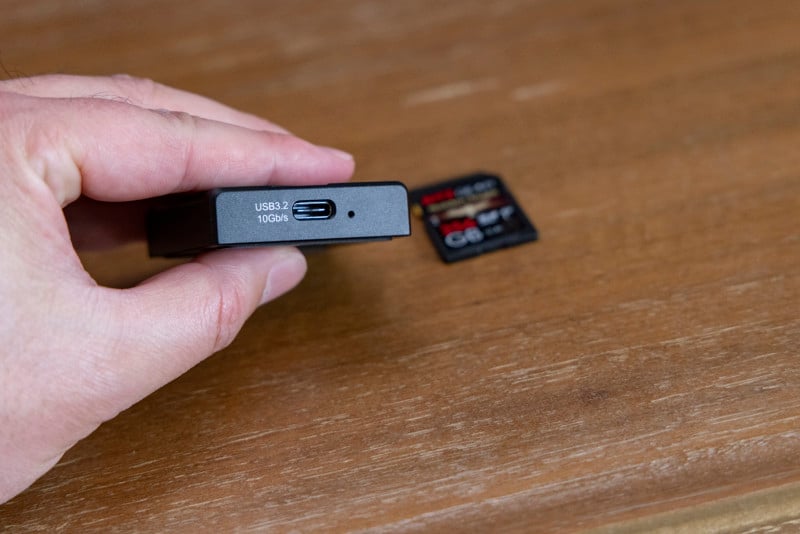 Hearing this, I was at a loss. I’ve never, ever heard of a card that will get worse as it fills as a design decision. I can absolutely confirm that it does work like this (perhaps even worse, since I only had to fill 32.8GB before I noticed that throttle), and it’s not something that would show up on speed tests either.

That 34-minute video clip I captured on the R5 would serve as a great place to measure actually expected transfer times. From the Golden Eagle card through the Ritz Gear SD Express card reader, it took three minutes and 37 seconds to transfer that one 32.8 GB file.

To compare, a Sony UHS-II V90 SD card was able to transfer the same video file through a ProGrade memory card reader in one minute and 57 seconds. Mind you, SD Express is supposed to be a much, much faster format than SD UHS-II.

It’s Worse Than We Expcted

I just, again, want to point out how little sense it makes for a card to claim 500 MB/s write speeds but only certify as V30. That alone should really be a big, red, flashing warning sign that something is very, very wrong. But I also know that so many people have no idea what V30 means, and this will get overlooked in favor of the flashy promised speeds.

That touches on the most frustrating part about this card: the average photographer who might buy it likely won’t encounter many of the issues that make the Golden Eagle a waste of money. If you just take photos, it will operate fine in most circumstances and you’ll be blissfully unaware that you paid $250 (the card has already fallen $50 since my first story) for what equates to $50 of performance (UHS-I 256GB cards are still pretty expensive).

I was already not going to recommend this card to anyone who wanted to use it with any camera on the market, but I at least expected it to provide some top speeds when put in the ideal environment: an SD Express card in an SD Express reader. But from what my tests show, it can’t even do that.

For the sake of transparency, Ritz Gear sent me results from a test that was performed by a different “client” through a PC, and those show the promised results. I can’t explain why there would be a difference in performance through a USB-C reader on a Mac and a PC, but if you want to trust these secondhand results, be my guest.

All I can say is that I was not able to recreate them or anything close to them. And, for the record, the reader states explicit support for Mac OS, so there should be no reason to see a discrepancy.

And everything I just pointed out is even before considering Ritz Gear says the card is going to have “low” performance for 7/8 of the capacity. It’s madness!

Here is the really important part, though: this card will never, ever, under any circumstances, provide anything close to the speeds promised on the box when it comes to using it in a camera.

It simply can’t. Not only does my testing prove it, but the SD Express specification says exactly the same thing. I’ve said this before and I’ll say it again: SD Express is limited to UHS-I speeds when used in a non-SD Express port, whether that be in a camera or a computer. That’s every camera with an SD card slot ever made. Buying this $250 card means spending an extra $200 for absolutely no reason.

Really any UHS-II or UHS-I SD card made by a reputable brand will act as a solid alternative. SanDisk makes a 256GB UHS-I card for $50, and it will equal the performance of the Golden Eagle under its best circumstances. If you want more speed, ProGrade Digital Cobalt cards are outstanding. Really, the company’s entire line of cards from V30 up through V90 are excellent buys. Even at the 256 GB capacity and V90 performance, ProGrade’s cards are just $10 more expensive than the Ritz Gear SD Express.

Should You Buy it?

No. Never. Under no circumstances should you buy this card. It is a gigantic waste of money.