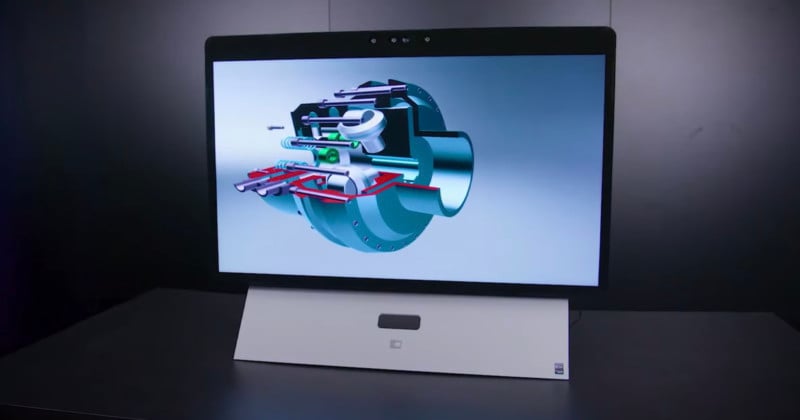 Spacial visualization company Dimenco has created what looks to be the wild future of displays with its 3D stereoscopic monitor. How does the next generation of 3D look? In short: breathtaking.

Dimenco invited PetaPixel to see a hands-on demonstration of its $11,225 “Innovation Award” winning Simulated Reality Pro Display. After my time with it, I can only describe what I saw as jaw-dropping. Do I need one of these systems? Not in the slightest. Will I rest until I have one? Also absolutely not.

So first things first, what exactly is “Simulated Reality” (SR)? According to the User Experience Design lead at Dimenco, it is a new immersive technology that sits somewhere in between augmented reality (AR) and virtual reality (VR) that allows for a lot of room to explore content.

Having seen the display and gaming laptop in action personally, I can confirm that this description is pretty accurate. The technology in the display allows you to experience 3D-like content with parallax and perspective-shifting for an incredibly immersive experience that does not require the use of additional wearables like 3D glasses.

I went into this demo expecting something maybe a bit better than the parallax available with the “live” backgrounds you can get on the iPhone and other newer smartphones, but what I got was something so much more.

When viewing content designed for SR from outside of the large 32-inch display’s “hitbox,” the content just appears like it would on any other normal display of its size. But once you seat yourself in the proper position and distance from the screen, the built-in multi-camera system starts to track your eyes and positioning (hands included) and begins serving up a 3D image that honestly had my jaw on the floor.

What looked to me to be a floating 3D image was brighter, sharper, and easier to view and see around than any 3D TVs (RIP) or theater screens (glasses included) I had ever seen.

The Tech Behind the Display

Without getting into too much detail, the SR Pro Display runs a QUHD resolution of 7680 x 4320 (8K) with a refresh rate of 60Hz at a reasonably bright 400 nits for that kind of resolution and refresh rate. The company also claims a color rating of 100% Adobe RGB, 100% sRGB, 100% Rec709, and 98% DCI-P3, which looked accurate but I was not able to calibrate the display during my time with it. On specifications alone, and notwithstanding the promises of a 3D immersive experience, that’s really impressive.

The $11,225 price that Dimenco is asking isn’t actually that crazy for super color-accurate monitors, and this one is 8K and supports glasses-free 3D. If that’s the price Dimenco is entering the market at as a brand new technology, I can easily see it coming down to a much more reasonable price once it’s ready for the general consumer.

The display is a seriously hefty 40 pounds (18 kilograms), making it not exactly something portable. Anyone interested in this display will definitely want to have a space that is sturdy and secure to operate it on.

To activate the SR controls and view, the system has Intel RealSense D455 sensors for Eye-tracking and uses a Leap Motion Controller for hand tracking. Given that Intel has abandoned development of the RealSense system, it’s not clear what Dimenco is going to do going forward.

To take full advantage of this display and its SR tools, the computer behind it needs a minimum Intel i7, 10th gen CPU, and an Nvidia GeForce RTX 2080 Ti or GeForce RTX 30-series GPU. Basically, this display needs a top-of-the-line VFX or gaming machine to provide a proper experience.

When the SR is activated, the display shows a weaved and stitched together left and right view which will end up shown to the left and right eyes respectively using the 3D position of the eyes as tracked by the D455 sensor. This technology allows you to truly “look around” the images displayed on the screen and actively engage with it as it responds to your actions. The result is that it actually creates an immersive experience.

How it Feels To Use the Dimenco Simulated Reality Display 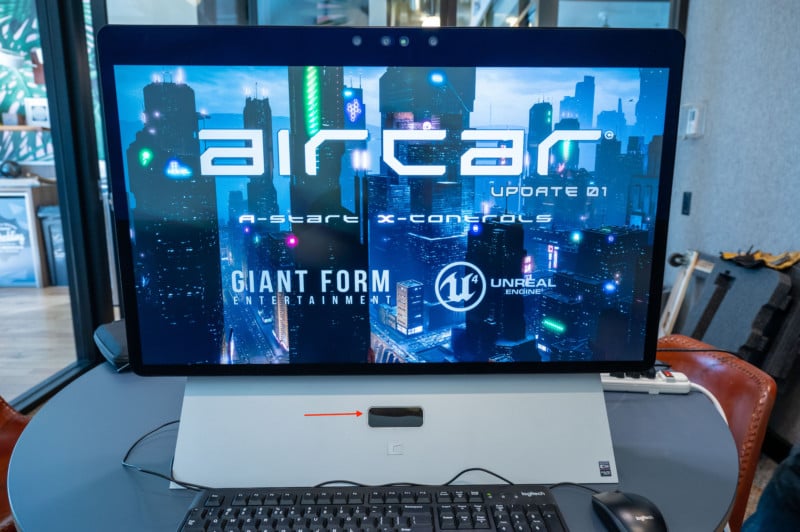 The demonstration began with a 3D model scan of a building that, with simple hand gestures, I was able to spin, pivot, twist, and zoom in and out on the model with relative ease. I felt like Tony Stark or Tom Cruise in Minority Report.

The sensors located at the base of the 32-inch display (seen above) will track your hand movements which allow for these actions and it works quite well. Granted I kept messing it up because I was so enthralled by the display I kept leaning in too close to see how far I could peek around the corners, and as a result, the cameras kept losing my hands. To regain control, I simply held up an open palm to the screen when I was back in the “zone” and then hand signal controls resumed once they could again see me.

Shifting the viewing angle from left to right, up and down, will give you a breathtaking 3D view that I cannot put to words other than to say it is just plain cool. But, as you can see above, if your viewing angle steps out of the camera array’s “hitbox” while the SR display is active, you will start to see overlayed or double images (which is how the 3D perspective is created) and if you remain out of this area, the image will shift back to a normal 2D display mode.

The company has also partnered with Acer to create a series of laptops capable of leveraging the SR technology on a smaller scale, the first of which is the newly released Concept D SpatialLabs Edition laptop which I was also lucky enough to get some hands-on time with.

To demonstrate, we loaded up a racing game we downloaded from Steam, played a few 3D movies, and opened some 3D objects in Blender, all of which were presented in a wildly impressive manner and were just jaw-droppingly beautiful. 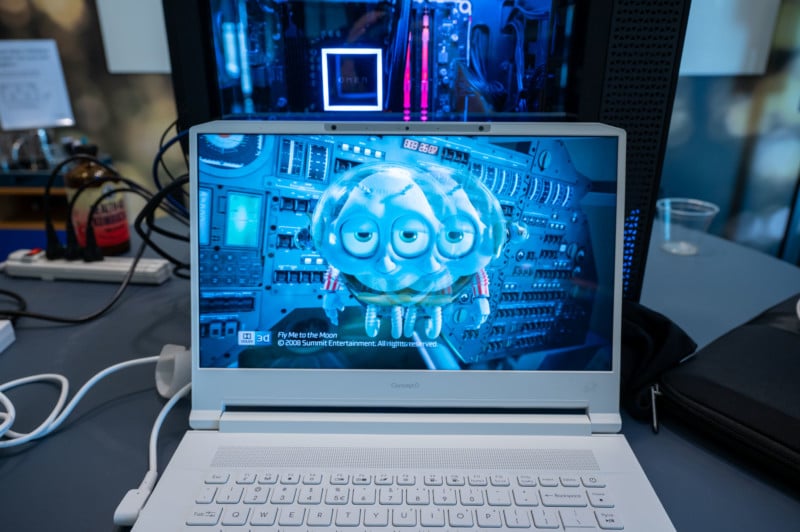 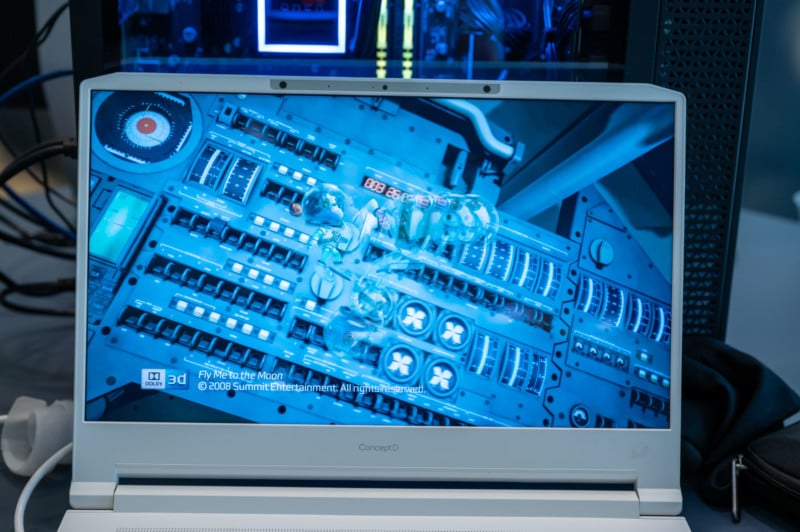 I was so blown away by the quality of what I was seeing, I spent a third of the meeting just watching a single cinematic play on a loop while I shifted my perspective from left to right, to up and down, playing with the zoom, just not really believing that I was able to see a 3D perspective without the aid of 3D glasses.

All the while, it just looks so damn good.

It really is a shame how hard it is to capture on camera or describe it, because this is one of those things you really have to see for yourself to fully understand. I hope you all get to experience it yourself.

Despite the absolutely beautiful display, there were a few limitations in its responsiveness. As mentioned above, if you leverage the hand controls of the device and happen to move too fast or out of the sensor’s hitbox, you will have to reset your controls to regain the hands-free mode capabilities.

Additionally, if the cameras cannot see your eyes clearly, the display can start to stutter or it will just shift back into the normal 2D viewing mode. I was able to trigger this behavior by wearing my face mask, glasses, and a baseball cap pulled tightly and low over my head, which effectively would obscure the camera’s view of my eyes every time I looked down. All things considered, this is a very minor inconvenience and is easily addressed.

Something else worth noting is that with the hitbox size, the larger the display you’re working with, the wider your possible range of movement. I was able to move around and change perspectives much more while using the 32-inch display than with the Acer ConceptD laptop. Using the large display, it was possible to lean in close to the screen as well as sit back in the chair and still leverage the full SR display modes, while with the laptop I was limited to just an arms-length from the keyboard worth of freedom.

Incredible Experience at the Bleeding Edge

While the technology is amazing and no doubt revolutionary with a huge list of possible use cases, there really is no benefit for still photographers to use this, at least not just yet. That doesn’t change the fact that I still want to have these displays in every corner of my home. If you are the type of photographer who also does 360-degree work, AR/VR mapping, or virtual tours for real estate and travel, you can probably see the advantages of this display for the end-user. Even those in the NFT world who want to create more immersive and animated images can see what this thing can offer the experience. 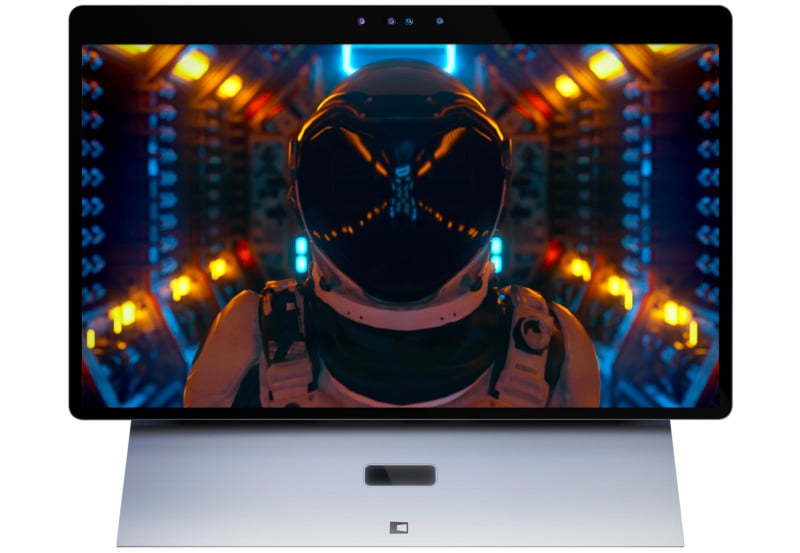 I think this technology will really sing in the hands of architects, automotive and city planners, medical professionals, and VFX (3D/AR/VR) artists. Real estate professionals can look at 3D scans of buildings and create true virtual tours of the properties for potential clients, for example. That’s not to mention the benefit of better visualizing the space for repairs or additions.

Doctors can move around medical scans and get a much better understanding of their patients. As the technology becomes more widely used, and therefore easier to develop for (and also becomes cheaper, as technology does), we will definitely see more practical applications for photographers down that line.

Dimenco actually specifically told us that its display technology would work especially well with stereoscopic lenses, like Canon’s recently announced Canon RF 5.2mm f/2.8 L Dual Fisheye lens. I can’t help but think how much better the demo video Canon made for that lens would have looked on this SR display.

A lot of discussion is being had over the “metaverse,” but I think the blending of 2D and 3D displays is a lot more exciting than whatever Mark Zuckerburg thinks the future looks like. Dimenco’s SR display is the most excited I’ve been about 3D, well, ever.