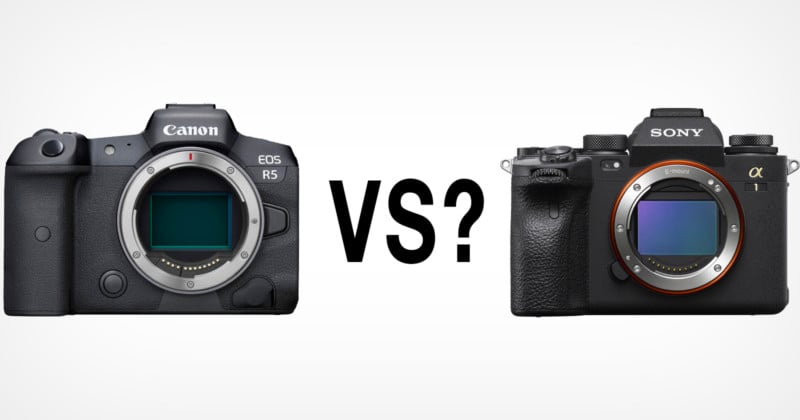 Since the Alpha 1 made its way into the hands of YouTubers and reviewers, a flurry of videos has been released that compare Sony’s flagship against the Canon EOS R5. But is this really a comparison that we should be making?

Last week, Gordan Laing published a short 8-minute video where he shows side-by-side examples of the Alpha 1’s image quality next to the Canon EOS R5. Since both of these cameras are pretty new and both have similar megapixel resolutions, I can see why this comparison might be made, and actually encourage such a comparison.

Laing was generous enough to share the following three image examples of that image quality for your reference. :

You can see Laing’s full review with even more image samples here.

I think it’s fair to question how similarly-sized sensors compare to one another, so image quality and ISO tests make complete sense. I think the same could be done for a video test that compares the quality of the 8K.

But comparisons that throw the cameras against each other for in the field use case scenarios feel weird to me.

Around the same time Laing shared his video, Jared Polin published his that more broadly compares the two cameras, asking if the Alpha 1 is overhyped and overpriced when compared to the EOS R5.

More recently, Tony and Chelsea Northrup published a video directly comparing the Alpha 1 and the R5 in portraits, sports, and wildlife.

I am not particularly focused on the results of the test nor the conclusions stated by either of the Northrups or Polin, but more wanted to point out that comparing the cameras to one another is a continued trend.

Whether or not comparisons are finding one better than the other is, to me, irrelevant. Polin says in his video that he intends to do comparisons like this because his audience is curious, and that’s fair. However, to me, I think it is important to properly frame the cameras before jumping ahead and answering that question.

Yes, general consumers are going to want to compare the EOS R5 and the Z7 II against the Sony Alpha 1 because all of these cameras are currently the latest and greatest that each company offers, so it’s natural to ask which is better. But it’s also the responsibility of journalists to remind readers and viewers that the EOS R5 was never meant to compete against a camera like the Alpha 1 (or vice versa) and even if it does well or poorly, comparing them without really thinking about product lines feels like missing a big step.

The R5 is not going to be the camera compared to the Alpha 1 in a year’s time. Both Canon and Nikon are expected to release their own versions of a high-end action photographer’s camera soon and when that happens, looking back at these comparisons of the R5 versus the Alpha 1 is going to seem very misplaced.

Canon isn’t calling the EOS R5 its flagship mirrorless camera while Sony has dubbed the Alpha 1 as such, a first for a company that has been coy about never calling any of its cameras by that name in the past. The R5, like the 5D series before it, is not supposed to be top-of-the-line. The “5” series was always good quality, but a mix of consumer and “pro” features.

I get it: comparing camera tech is fun and exciting and I’m not trying to take that away from anyone. I’m just asking everyone to remember that these camera lines aren’t going to be the ones that should really be compared once all the companies in the game have fully fleshed out their offerings. Sure, that takes patience and patience isn’t exciting, but I thought this message should be out there nonetheless.

Editor’s Note: Originally, this opinion piece stated that Jared Polin believed the Alpha 1 was “overhyped and overpriced when compared to the EOS R5” without adding the question mark present in his video title. His video was asking the question, not making a definitive statement. That error has been corrected.

Additionally, Chelsea Northrup was originally not mentioned as a co-creator with Tony Northrup. This has been corrected and we apologize for the omission.