According to images shared by YouTuber Dave2D, OnePlus will soon be releasing a high-end flagship smartphone that features Hasselblad branding on the camera array. While many rumors like this end up being fake, this one actually appears legitimate.

OnePlus doesn’t have the best reputation for smartphone camera quality and the last time Hasselblad stepped into cell phone cameras was with the $250 Hasselblad True Zoom, a large modular attachment for the Motorola series of phones that accepted “Moto Mods.” That camera was incredibly disappointing from an image quality standpoint.

One Plus and Hasselblad may both be in this for redemption then, as a very believable report indicates that OnePlus 9 Pro is going to feature a Hasselblad camera system.

In photos shared with Dave2D by an anonymous tipster, this upcoming phone has a similar design and camera bump to the leaked images of the OnePlus 9 but adds another camera and a laser (that will likely be used for focusing). It is speculated that instead of the “Hasselblad” name, the base OnePlus 9 will see the “Ultrashot” label instead.

Speaking of the camera array itself, the leaked images appear to show two large sensors and two much smaller cameras on the system, and the images shared with Dave2D seem to indicate that the phone can achieve a lossless 3.3x zoom, which would be an improvement over the OnePlus 8’s lossless 3x zoom. Dave2D also notes that there is a Tilt-Shift photography mode shown next to the Portrait, Nightscape, and Pro modes. 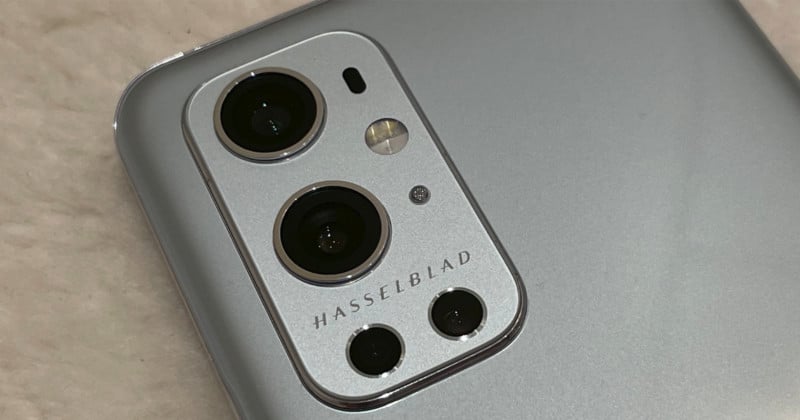 As many readers are no doubt aware, smartphone photography has been growing steadily for years, basically as an inverse to the collapse of the standalone camera market. Zeiss and Leica already have long since been players in the camera phone brand game, the latest is Vivo’s partnership with Zeiss (Vivo is a sister-company to OnePlus), so seeing Hasselblad again dip their toe into the pool does not come as a surprise. Hopefully, this latest play will actually result in standout image quality, which is rare in the camera company co-branding game and even rarer for Hasselblad co-branding.

Hasselblad has been very selective about its branding on camera outside its medium format bread and butter since its fiasco with rebranded luxury Sony cameras. Releasing cameras that aren’t up to the high-end expectations of the Hasselblad brand are more hurtful than helpful these days, with the company under far more scrutiny than its competitors thanks to the meme-worthy Stellar and Lunar.