A highly-controversial drone video surfaced online this week that seems to have been captured illegally. In it, the pilot flies shocking close to the US Navy Blue Angels as they performed an “America Strong” flyover in Detroit on May 12th.

According to The Aviationist, The video was allegedly published by one Giovanni Lucia (@giolucia) on Instagram and Facebook. Mr. Lucia seems to have deactivated both accounts and taken the video down, but not before YouTuber Moss Photography downloaded the video and shared the mirror on his YouTube channel in order to send the link to “multiple government agencies” who might be interested in investigating what looks like flagrant and dangerous disregard of FAA rules.

We’ve seen and written about many incidents involving drones flying in no-fly zones or perilously close to aircraft. London Gatwick had to shut down due to a drone incident, and even the Blue Angels have had a run-in before. But we’ve never seen footage from a drone this close to fighter jets while they were flying over a major metropolitan area. 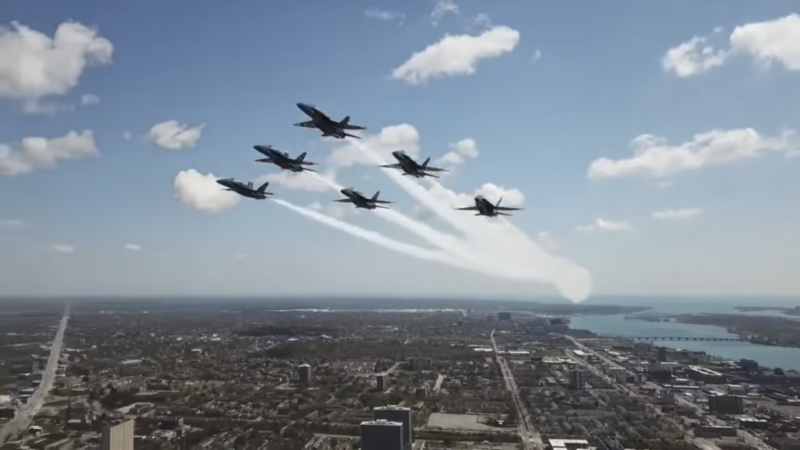 While it’s currently impossible to confirm that Mr. Lucia is the man behind this video, some basic online sleuthing seems to confirm that he lives in Detroit and has published questionable drone photos and videos before.

The Aviationist and Fstoppers both found other social media posts attributed to this handle online, where the same person published aerial photos of downtown Detroit in February of 2017 alongside the caption “might of broken a couple of FAA regulations today…”

Neither the Blue Angels nor the US Navy have published any official statement regarding the video, but a “reliable source” has told The Aviationist that the FAA and the Blue Angles are both aware of this video’s existence.