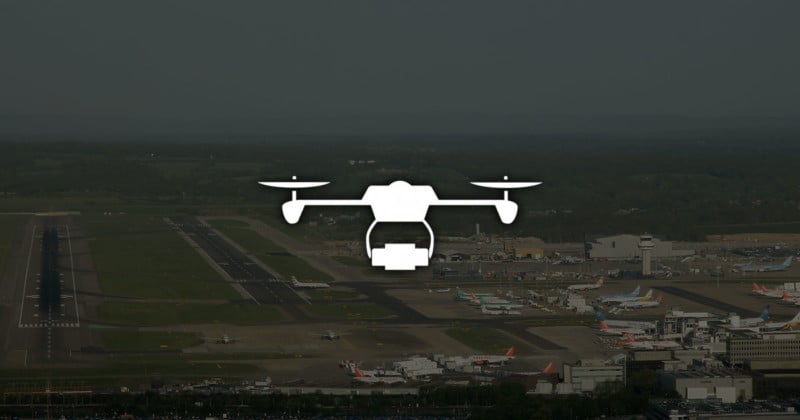 London’s Gatwick Airport, the second-busiest in the UK, has been shut down after two drones were reportedly spotted flying near the airfield. Over 100,000 passengers and over 750 flights may be affected in just 24 hours, and the military has been called in to support local police in handling the chaos that has ensued.


BBC News reports that the “industrial specification” drones were flying in a “deliberate act” of disruption, according to Sussex Police, and that the disruption could last for “several days.”

The airport announced the shutdown late Wednesday after the drones were spotted around 9pm:

After briefly reopening at 3am on Thursday, the airport was shut down again in just 45 minutes after additional drone sightings.

Over 20 law enforcement units scrambled to search for the drone pilot and for a way to disable the drones. Police decided not to take down the drones with guns due to concerns of collateral damage from bullets.

“Each time we believe we get close to the operator, the drone disappears; when we look to reopen the airfield, the drone reappears,” Supt Justin Burtenshaw tells BBC News.

The military has since been called in to aid in the situation:

BREAKING: Gavin Williamson has just confirmed to me & other reporters: “We will be deploying the armed forces” at #Gatwick, who will use “unique military capability” to help in the drone crisis.

Declines to give any further detail about what military will or can do.

11,000 travelers were stranded at the airport Wednesday night, others were stuck inside grounded planes for hours, and 110,000 passengers on 760 flights were scheduled to pass through Gatwick on Thursday.

1/2 Thursday 11.45: All flights remain suspended from Gatwick today, due to ongoing drone activity around the airfield. There is significant disruption, as a result of what appears to be a deliberate attempt to disrupt flights.

2/2 We are extremely disappointed that passengers are being affected, especially at this time of year. Our advice continues to be not to travel to the airport and to check with your airline on the status of your flight. pic.twitter.com/65N8Dbt1Wl

And because this disruption has been an “extraordinary circumstance,” the Civil Aviation Authority (CAA) says airlines aren’t required to compensate passengers for what has happened.

The @UK_CAA is offering advice to passengers impacted by the disruption at Gatwick Airport.

Please visit the following website to find a leaflet on your rights as a passenger: https://t.co/9hxLyyJBvB.#Gatwick #Gatwick_Airport pic.twitter.com/ljUaFDKcMo

Industry bodies are condemning the drone pilot and calling for new regulations and countermeasures:

Here's our statement on the London @Gatwick_Airport #drone disruption. pic.twitter.com/DgEfSzI158

The CAA also issued a warning to the public regarding flying drones in and near airports:

It is totally unacceptable to fly drones close to airports and anyone flouting the rules can face severe penalties including imprisonment.https://t.co/avAtyxPdQZ#Gatwick #Gatwick_Airport pic.twitter.com/XQqB4W9Kc0

The drone pilot in this Gatwick case reportedly faces up to 5 years in jail if caught and convicted.

The closure of Gatwick Airport for 12 hours now due to drone flying appears to be a deliberate criminal act with geofencing breached. I’ve previously raised this issue in Parliament and will be again. The sentence is now 5 years in prison but further efforts are clearly required.

UK Prime Minister Theresa May held a press conference and stated that authorities will catch and jail the perpetrator.

"The activity we have seen is illegal" – UK PM Theresa May says people responsible for flying drones over Gatwick Airport face prisonhttps://t.co/Z41GmrDtyx (with video) pic.twitter.com/R8MYJj78Bi

Reported incidents between drones and aircraft have increased in recent years. A drone strike was reported at London’s Heathrow Airport in 2016, and Mexican authorities are currently investigating whether a 737 was damaged by a drone strike while landing last week.

(via The Guardian and Fstoppers)

Update on 12/22/18: Police have made 2 arrests in connection with the “criminal drone activity”:

#GatwickDrones | Around 10pm today we made 2 arrests in connection with criminal drone activity at Gatwick Airport. Proactive investigations are still on-going: we urge the public to contact us if they believe they have information that can aid us further. https://t.co/dOmKw4GnfO