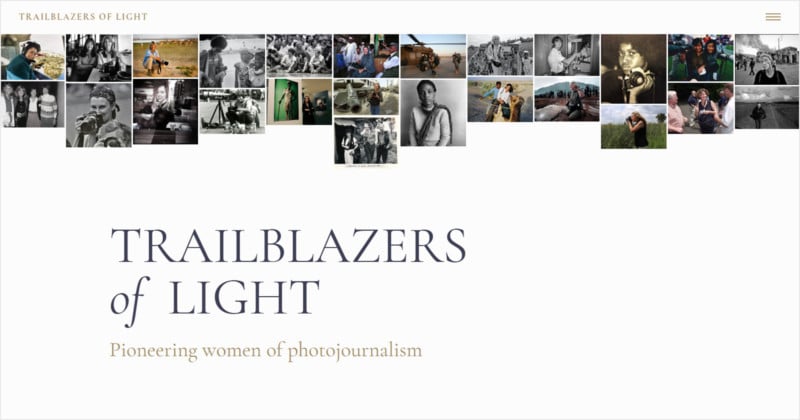 Trailblazers of Light is a website that recognizes the pioneering women who made a mark in the field of photojournalism during the days of film photography.

The site was started by Yunghi Kim, a Special Contributor to Contact Press Images who has been active since 1984, who was bothered by what she saw as a revisionist narrative and inaccurate portrayals of women in the industry over the past few years.

After writing a Facebook post mentioning several notable women in photojournalism, Kim heard from other photographers who chimed in with more names. She then decided to compile the extensive list into a website, and that’s how Trailblazers of Light was born. It was designed by Debra Pang Davis and launched to the public in January 2020.

Trailblazers of Light now features over 500 names of female photographers going from modern shooters in the 1990s all the way back to Frances Benjamin Johnston in 1889.

“This site has been developed to acknowledge the accomplishments of women photojournalists during the film era, decades before the advent of digital cameras,” the website states. “Also referred to as ‘The Silent Generation,’ it refers to a time when a few courageous women first entered the photojournalism work force and simply did the work without fanfare but with steely determination.

“They worked side by side with men on a daily basis at newspapers, magazines, wire services, and photo agencies. They reported from foreign war zones, the streets of our towns and cities across America, and everywhere in between. A generation of courageous and fearless women who embraced all that came with the job. For many the work came first.

“Everyone included on this list is a woman who in her own right has made her mark in photojournalism.”

(via Trailblazers of Light via CNN)

Nikon D6 Delayed as Parts Held Up by Coronavirus Outbreak