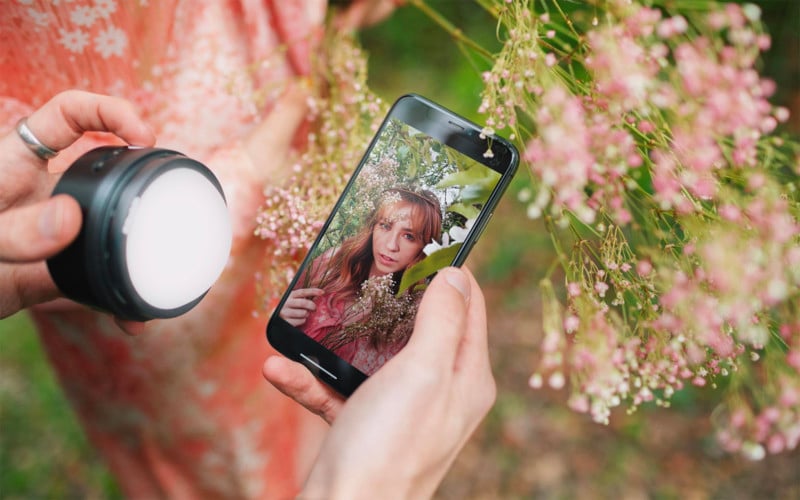 If you want to piss off a majority of professional photographers, show them a smartphone camera rig setup and explain how great it is. Better yet, show them an article about an iPhone-only wedding photographer. I’ve seen this reaction countless times, and it’s especially prevalent when you look at smartphone photography accessories.

Companies who promote products for high-end cameras while also introducing low-end products know this, which is why the official Profoto C1 YouTube video has comments disabled. In fact, every video I’ve checked that features the C1 in any way on the Profoto YouTube Channel has comments disabled, in contrast to their other content where discussion is welcomed.

Translation: Profoto understands that this product is going to piss you off.

At the same time, they can’t not sell things like the C1. As a company with a niche market that continues to get more… niche-er… they absolutely cannot afford to ignore the smartphone photographer. And as much as there is a big part of me that wants to sneer at and deride Profoto for a product many of you will argue is a sham, or a piece of garbage, or an attempt to make a quick buck, if I were to do so I’d be missing the bigger picture.

Mock it all you want, there is a reason that every major smartphone maker spends at least a portion, and often a majority, of their marketing efforts around the camera. Just look at the iPhone 11 Pro, which is getting a ton of media surrounding its triple camera setup, new night mode and other photography features. For Huawei, the camera is the selling point. Same for the Samsung Galaxy products, and especially the Google Pixel.

A couple days ago, I was driving downtown in San Francisco and one of the several billboards that Apple buys prominently showed the new lens array of the iPhone 11 Pro. That somewhat weird looking rear of the phone, staring right at me. Next to me, my wife asked me what the big deal was, and why did the cell phone need three cameras.

I thought about it for a bit, and found myself defending Apple. I explained that phones aren’t phones anymore: they’re cameras that happen to make calls, give directions and hail Ubers.

Right now, us fans of higher end photography are all about bigger sensors, better autofocus performance and better low-light performance. Maybe even throw video performance in there too, since guys like me think that’s important. But sensors are already huge, and over the last five years or so they have become relatively cheap to produce (thanks to Sony). Autofocus is insanely good, even when you’re looking at the low end of the market. Low-light performance? Have you seen how good modern cameras are in low-light? They’re all excellent!

The amount of room separating the “best” from the rest of the pack is shrinking, and the number of people who are even willing to buy high-end cameras is shrinking even more. The fact of the matter is: you don’t need to buy the latest camera, or even the second latest camera, to make fantastic photos anymore.

Sales figures across the board are down (except for Sony who seems to be invulnerable to industry-wide trends right now). I argue that the a7R III is the best camera to buy right now, because the A7R IV has made it drop in price, and you don’t need the A7R IV (more on that in another piece).

But consumers still buy cell phones, and though the sales aren’t as high as they once were, they still buy them by the truckload. Thing is, everyone wants a cell phone. Everyone needs a cell phone. There are so many more people to sell to than the numbers Canon, Nikon, Sony and Panasonic are aiming at.

Admittedly, cell phones still have a lot more work to do when it comes to making advancements in photo technology—Apple, for example, is still working with the same 12 megapixel sensor they’ve been using for years—but advancements in computational photography are changing and growing by leaps and bounds with each new iteration.

Just look at what Google started with Night Sight.

So… what does this have to do with the Profoto C1? Well, Profoto would have to be pretty dense to not see the writing on the wall: the professional photo market is not sustainable. It is shrinking, and nobody knows how far it will shrinks before things settle. What is known, though, is that whatever it shrinks down to is not going to be enough to keep a high-end lighting brand afloat. They have to look to the future, at what they can sustain. If their goal is to stay a photography-oriented company, the answer is smartphone photography.

Profoto’s one big “miss” is pricing, since the price of their C1 is absolutely absurd for the market they’re aiming at. $300 to $500 is outrageous, plain and simple. That, and anyone could have predicted that a Chinese company, in this case Godox, was going to immediately release a competitor that will cost an arm and a leg less; in fact, the Godox R1 and R1F were technically available first.

But pricing aside, Profoto at least has the right idea. They know they have to market to the growing segment of what photography is becoming. They won’t go the way of Kodak who was all-but-killed off by its own creation, or at least they do not plan to go quietly.

Serious photographers may not like it. They may continue to complain about it as the inevitable waves of the future wash over them. But bitter insistence against the coming flood can’t hold back the cold reality: you cannot stop this.

New Website Sets the Record Straight: There is No Such Thing as 120mm Film