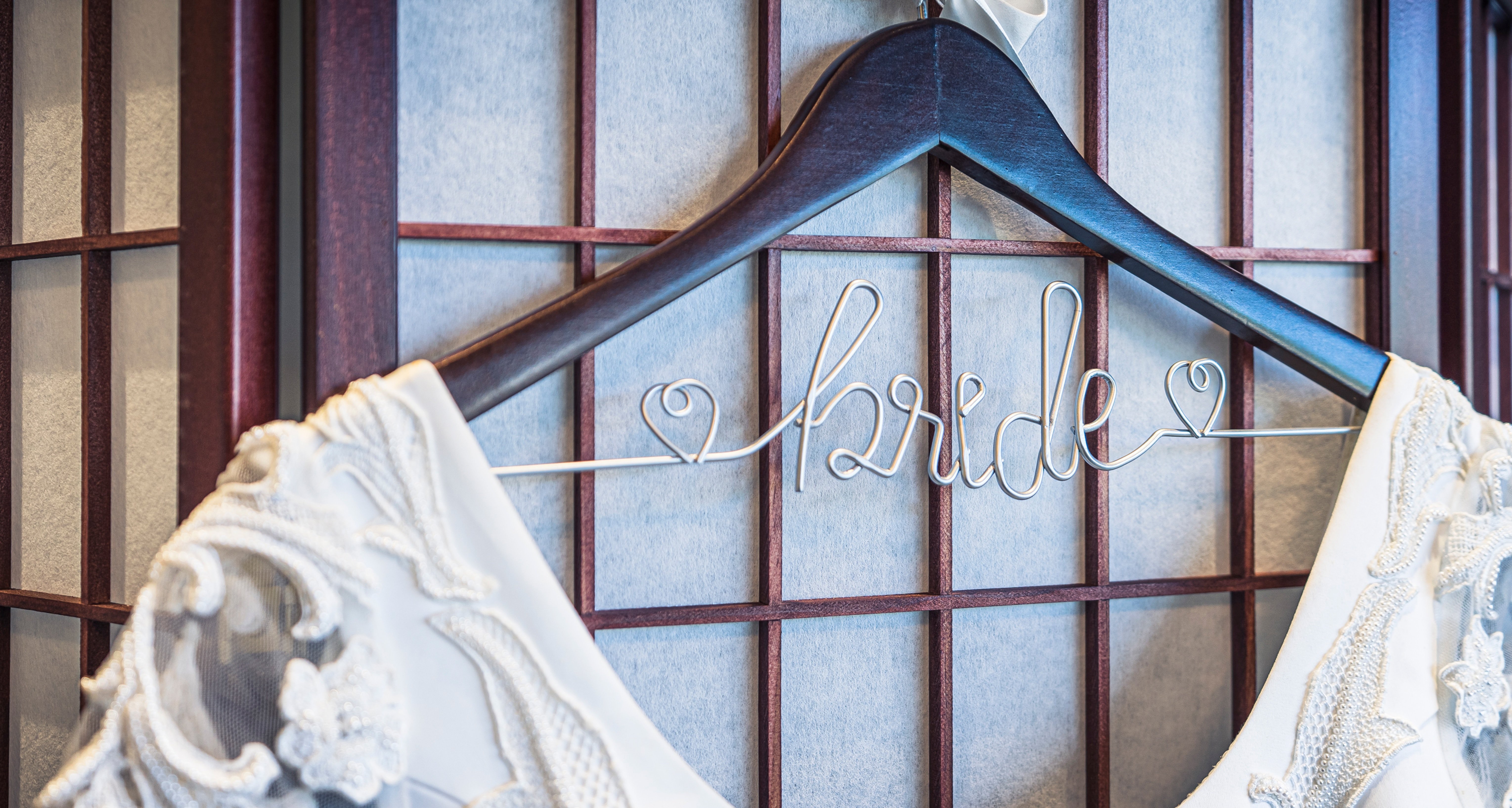 UK-based wedding photographers Frankie Lowe and Laura Dunning of Betrothed & Co recently ran afoul of an Instagram “influencer,” whose PR person seemed flabbergasted that the pair would choose not to work for free, for two years, in exchange for exposure to her client’s 55,000 followers.

The story begins with an email from someone named “Melissa” who claimed to represent “a well known social media influencer” who is planning to get married in 2021. In her email to Betrothed & Co, she lays out exactly what her client is expecting—two videos, approximately 1,000 photos, etc. In exchange, the mystery client would “extensively promote” their business to a combined Instagram and Facebook audience or 55,000 followers, in addition to offering those followers a 25% discount on Lowe and Dunning’s services.

“Just so you are aware,” concludes the email, “we have approached four other similar businesses in your area so a fast response will be beneficial to your business.” 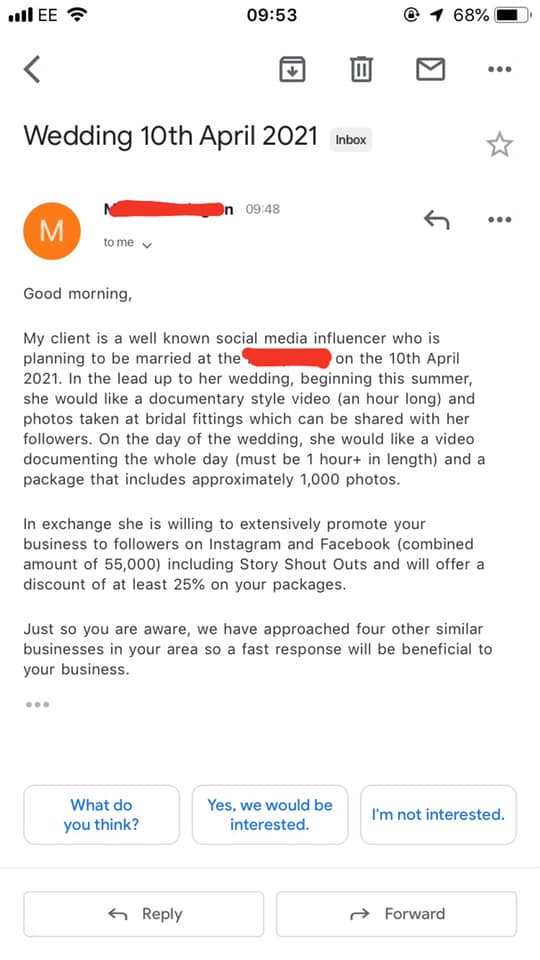 Lowe, who took the lead responding, was understandably confused and a little bit offended. He responded in kind, asking Melissa if there was a typo in the original email as 55,000 followers is hardly “influential” enough to demand £3-4K worth of services. He also thanked her for suggesting they offer a 25% discount in addition to free services, writing, “it’s helpful to know that in advance that being linked with your client will automatically knock 25% off the perceived value of the product we have spent so many years honing.” 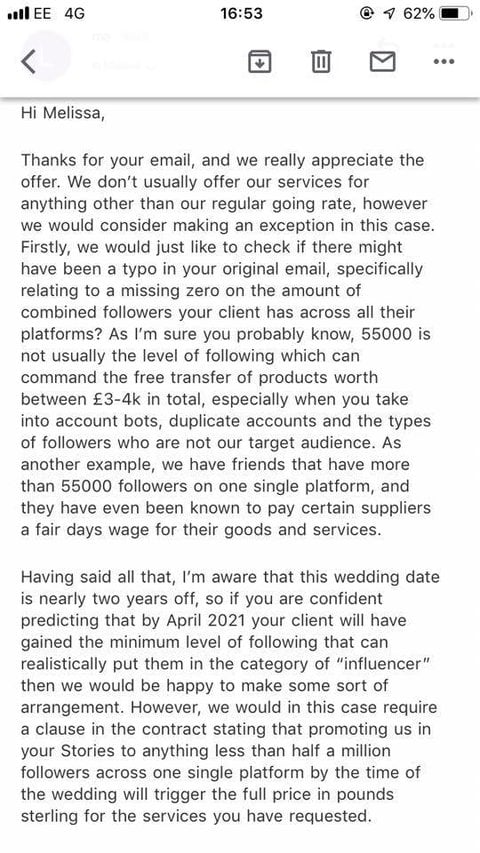 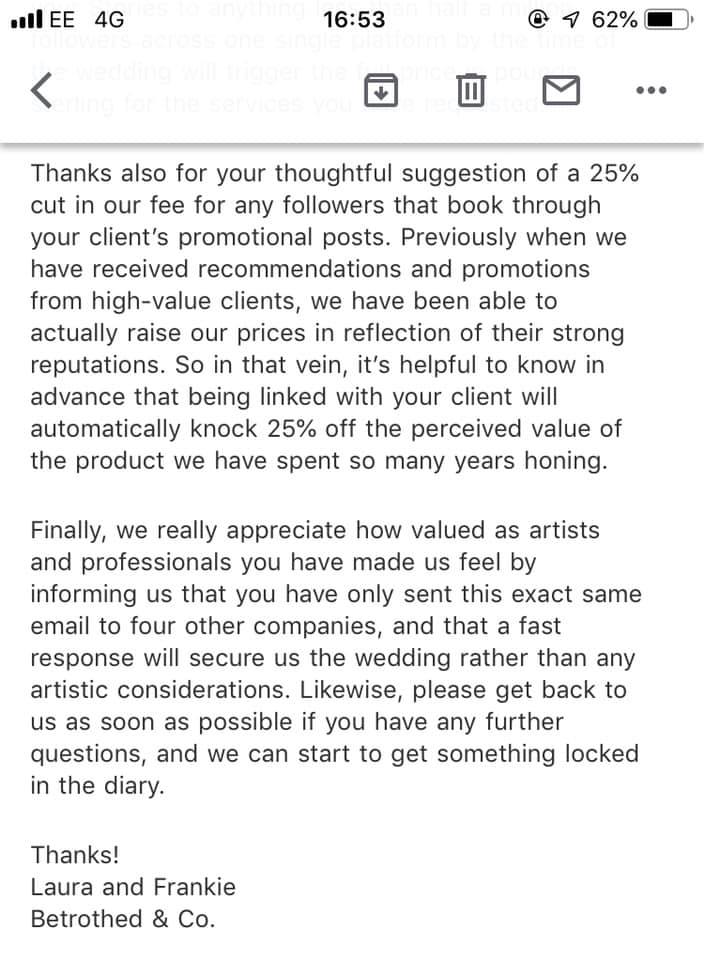 Their tongue-in-cheek response was not well-received, and Melissa responded immediately to inform them that they were “unprofessional,” that the response was “appalling,” and threatening to “name and shame” them if they were to respond and “continue with this abuse.” There is also a mention that the influencer’s mother was recently diagnosed with cancer.

“We will no longer be considering you as contenders to shoot what would have been a very lucrative wedding for you,” she writes. 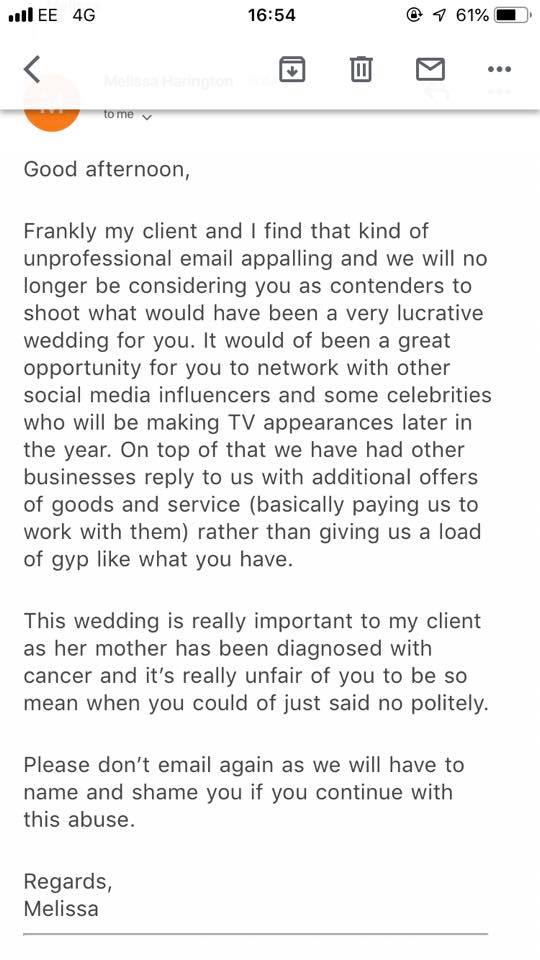 Lowe closed out the back-and-forth with one more email in which he addressed the accusation of “abuse” head-on, commented on the use of the mother’s illness in response, and concluded by writing:

“We’re just a couple of hardworking creatives trying to make a living in a very challenging industry, and occasionally that means standing up for our profession and valuing our craft.” 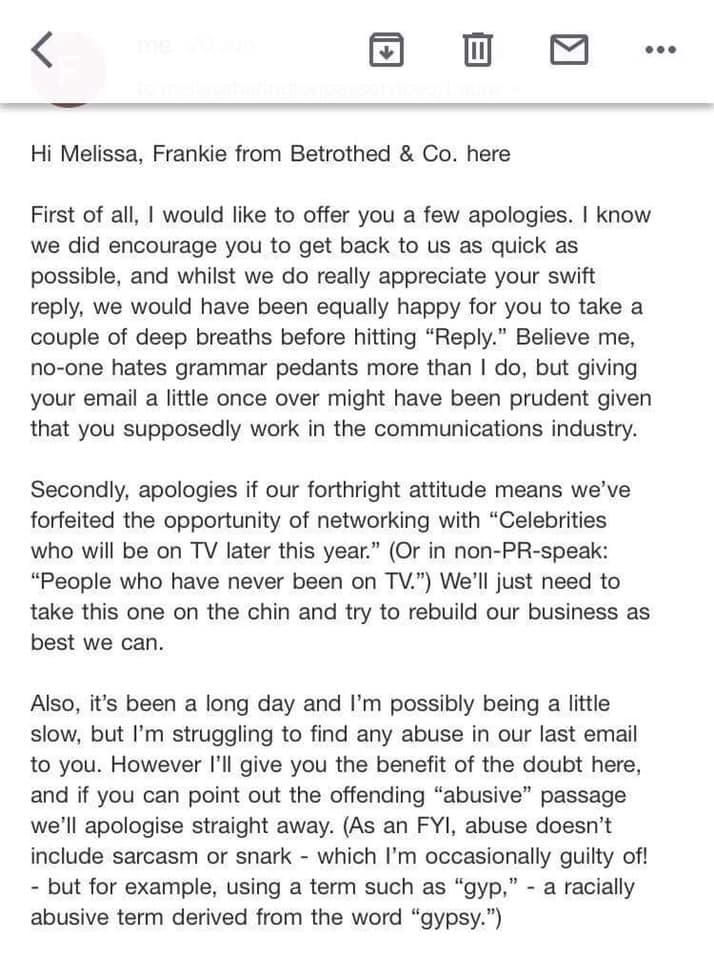 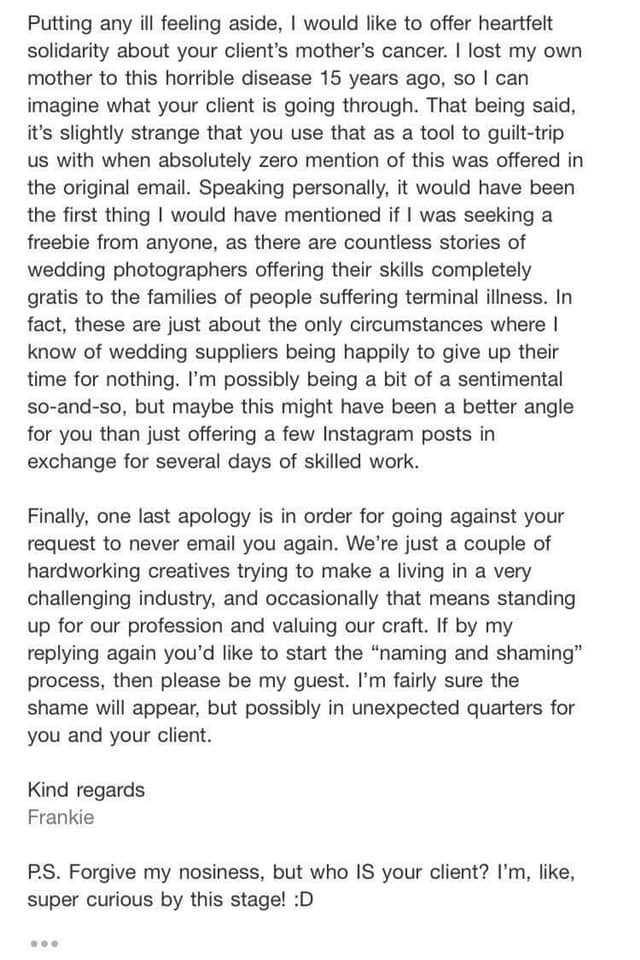 The whole email exchange was later uploaded to the Betrothed & Co Facebook page, where Lowe and Dunning further justified the exchange. “We don’t share client emails unless they look like this,” they said. “We are a really tiny business in a really competitive industry and emails like this really disregard how hard we work.”

Whether or not an actual PR professional would act this way is up for debate, but whoever Melissa is “representing” did not come off well in this exchange. As for “naming and shaming” Betrothed & Co, the photographers obviously got ahead of that particular threat by posting the unedited email exchange in full.

The problem of Influencers (and micro-Influencers) demanding free stuff certainly isn’t new, although this is the first we’ve heard of it affecting wedding photographers. Do you think Lowe and Dunning did the right thing by responding as they did, or should they have followed Melissa’s advice and simply sent a polite no?