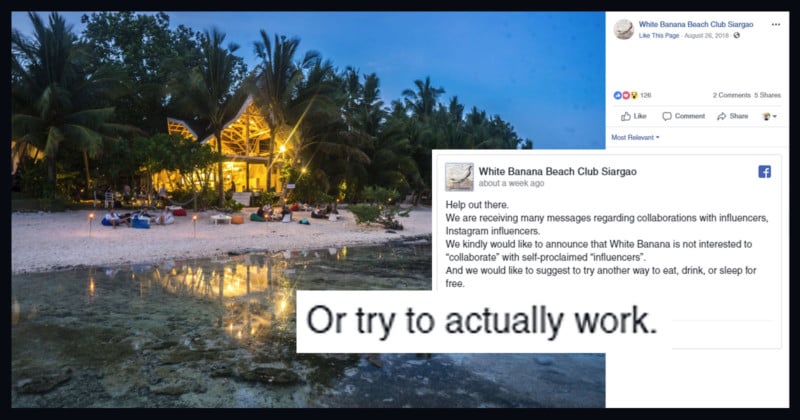 Photographers and other creatives often bemoan being asked to work for free in exchange for “exposure.” But with the rise of Instagram and social media, many photographers and “influencers” are turning the tables and making the same types of requests… to the annoyance of businesses.

Gianlucca Casaccia, the 40-year-old owner of the White Banana Beach Club in the Philippines, went viral last week after posting a message on his Facebook page directed at Instagram influencers who constantly request free food, drinks, and lodging in exchange for “exposure.”

“We are receiving many messages regarding collaborations with influencers, Instagram influencers,” Casaccia writes. “We kindly would like to announce that White Banana is not interested to ‘collaborate’ with self-proclaimed ‘influencers’.

“And we would like to suggest to try another way to eat, drink, or sleep for free. Or try to actually work.”

The New York Times reports that Casaccia has received about 100 freebie requests from influencers since the cocktail bar opened in May, and that the photographers/models/travelers try to pay with photos and videos instead of money.

But what’s baffling is that the “influencers” often have fewer than 2,000 followers on their Instagram accounts…

“How can you help me if you are no one?” Casaccia tells the Times.

“As someone who works in marketing and also manages a small resort, I can attest to the fact that the big influencers don’t ask for freebies,” writes a resort manager named Jamielyn Ladra in the most popular comment left on Casaccia’s viral post. “They ask for permission to film and take photos but they usually offer to pay (or send a business proposal instead of asking for free things).

“The ones who ask for freebies are often the ones with almost no real following because they think they are soooo worth it and have a ‘notice me’ mentality.”

In a follow-up post published on March 27th, Casaccia clarified by saying that he welcomes real influencers while rejecting self-proclaimed influencers (whom he refers to as “freeloaders”).

“[W]e want to clarify that we are not against influencers. Just against freeloaders,” Casaccia writes. “A real influencer is called as such by the rest, he does not address him/herself as an influencer. […] There are real influencers, that in case we will contact them and pay or offer something. But look, they’ve never contacted us, as they don’t need us. We need them.”

And in case you’re wondering, Casaccia tells the Times that his threshold for legitimate social media influence is at least 500,000 followers.