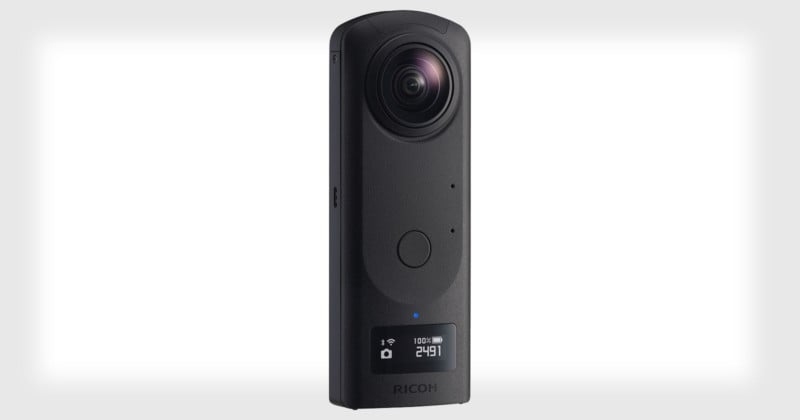 Ricoh has announced the THETA Z1, the company’s latest THETA 360-degree camera that becomes the flagship camera of the line that was first introduced in 2013.

THETA cameras are designed to capture 360-degree spherical photos in a single snap — the camera automatically stitches the two photos together for you — and the new THETA Z1 turns image quality up another notch. Inside the camera are dual 1-inch CMOS sensors that together capture 23-megapixel photos and 4K/30fps videos in a 360-degree spherical view. And improved processing algorithm provides improved noise reduction and low-light performance.

The lenses of the camera feature an improved design with less ghosting, fringing, and flares. Aperture can be selected from f/2.1, f/3.5, and f/5.6.

At the bottom of the magnesium alloy camera is a 0.93-inch organic EL display that shows status and info.

Other specs and features include 19GB of built-in storage, 4-channel mics, 3-axis rotational stabilization, a Function (Fn) button, and 360-degree live streaming in 4K or 2K. Ricoh hasn’t announced an exact date of availability, but the THETA Z1 will have a price tag of $1,000 when it hits stores (likely within the next few months).

The Winning Shots from Underwater Photographer of the Year 2019