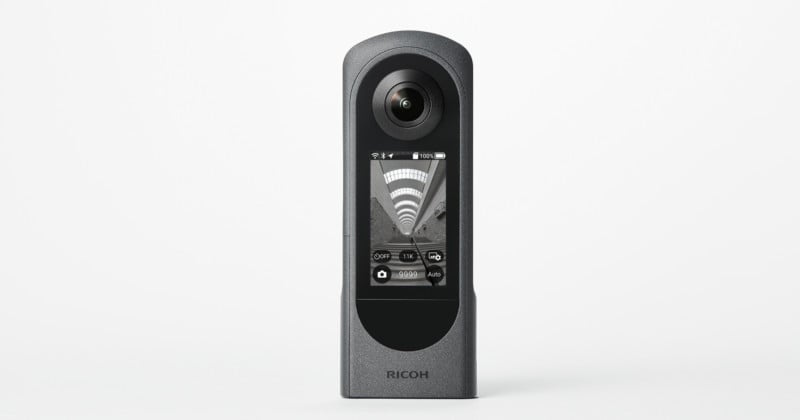 Ricoh has announced the latest generation of its line of 360-degree cameras, the Theta X. This “advanced model” is the first of Ricoh’s 360-degree cameras to feature a large touchscreen, interchangeable battery, and external memory card.

The overall design aesthetic of the Theta X isn’t much of a departure from its predecessors. It is a compact, handheld, and lightweight design with a metallic grey finish in a shape akin to that of a television remote control.

The CMOS image sensor, main processor, and lens design have all been updated. The Theta X has a new sensor with approximately 48-megapixels, it is now possible to capture high-resolution 360-degree still images with a maximum output of approximately 60-megapixels. Ricoh says two image sizes are available to match the scene: 11K for high-resolution bright-light indoor photography, and 5.5K to capture images easily and efficiently in other scenarios. Theta X also has “enhanced image stabilization” that the company says will provide smooth shooting 360-degree videos that can be captured at a 5.7K-equivalent resolution of 5760 × 2880 pixels at 30 frames per second. 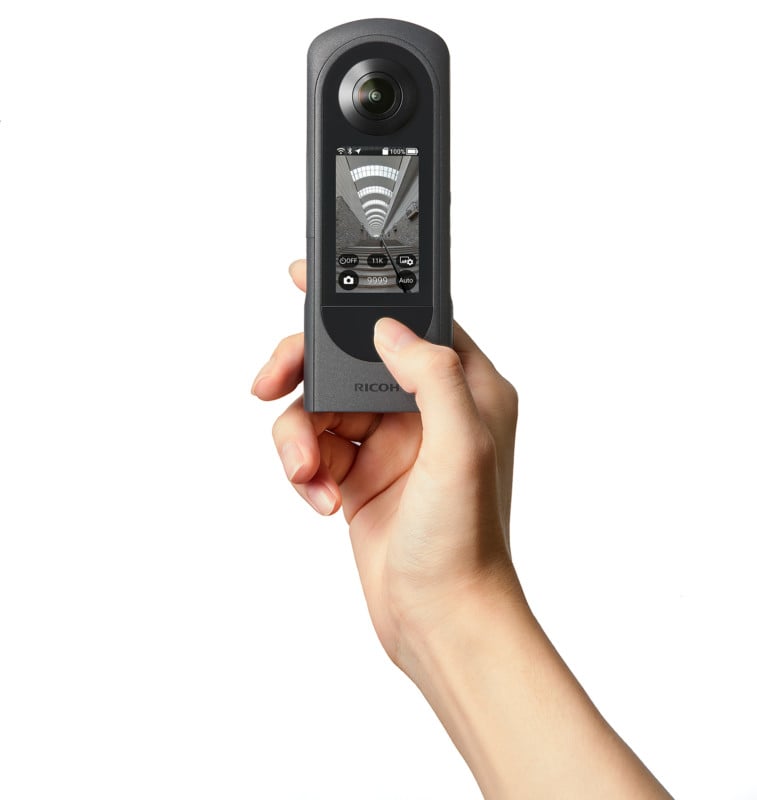 The First Theta with a Display, MicroSD Slot, and Swappable Battery

Ricoh has made many Theta models in the past, but none of them featured a large touch screen like the one found on the Theta X. The company says that the 2.25-inch display makes it a lot easier to use the Theta X as a standalone camera because it eliminates the need to use it in conjunction with a remote smartphone and app. Along that same line of thinking was Ricoh’s decision to make the battery interchangeable along with giving the Theta X the ability to use external memory cards which makes the handheld device operate more like a traditional camera, even if the shape is still a departure from what cameras traditionally look like. The Theta X features a microSD card slot (microSDXC) and a rechargeable DB-110 interchangeable battery. Additional batteries can be purchased separately as well.

Other Improvements and Features

Ricoh says the Theta X has better smartphone connectivity than its predecessors as it no longer requires the need to enter an SSID when establishing a Bluetooth connection. It also has real-time stitching capabilities with stabilization, which the company says removes the need to stitch videos and improves the processing time of 360-degree videos on computers “drastically.” 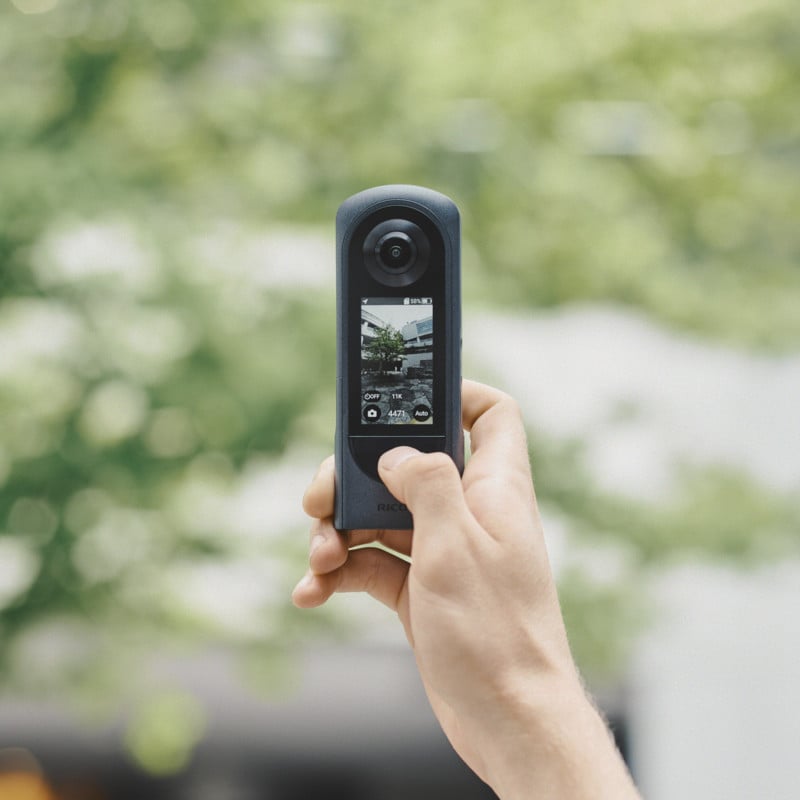 The Theta X uses an Android-based OS, like the previous Theta V and Theta Z1, which the company says enables third-party developers to create and release plug-ins that can expand the functionality of the camera. Ricoh again cites the new display as helpful for expanding the scope of said developments. It is also now also possible to set up “client mode” (a mode used to directly connect the Ricoh Theta to a wireless router) without using a smartphone, a feature that allows plug-ins to be installed and firmware to be updated through the Theta X itself without using a computer or smartphone. The Theta X has built-in GPS and supporrt for A-GPS and uses a USB Type-C connection that can be used for power during operation and is accessible even when the Theta X is on a tripod. It also features what Ricoh calls “Time Shift Shooting” which allows the photographer to capture an image without being in the frame as well as a continuous shooting mode that can shoot 20 still images per second at 5.5K resolution.

The Ricoh Theta X will be available in March of 2022 for $800. For reference, the Theta Z1 costs $1,050. Comparing the two side by side, while there are several usability enhancements on the Theta X over the Z1, the new camera does sacrifice somoe software features. The Theta X can’t shoot in RAW, does not have an Aperture Priority shooting mode, and doesn’t record spatial audio nor is it able to shoot interval composite shots.