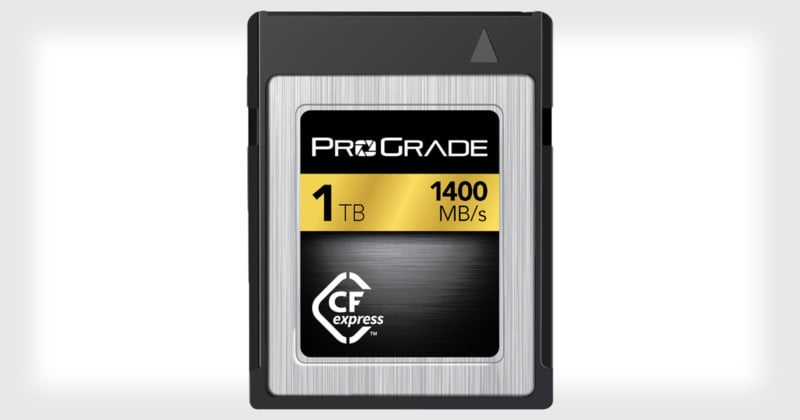 The card was debuted and demoed at the NAB Show that just kicked off in Las Vegas, providing “solid proof that the industry is moving toward productization of this new standard,” ProGrade says.

Thanks to the new CFexpress standard, this 1TB isn’t just high-capacity — it has ultra-high transfer speeds as well. While the current SDXC UHS-II and CFast 2.0 memory cards on the market have top-end read speeds of 300 MB/s and 550 MB/s, respectively, ProGrade’s 1TB card can do a staggering 1,400 MB/s (with burst write speeds of over 1,000 MB/s).

That’s why ProGrade made the decision of skipping the XQD format altogether and throwing its weight behind the standardization of CFexpress as the memory card format of the future. XQD-capable cameras will also be able to support CFexpress cards after a firmware update.

“Industry adoption of CFexpress will allow for much higher resolution and higher bit rate image capture than ever before in many still image and video capture devices,” ProGrade CEO Wes Brewer says. “Faster offload speeds will also greatly benefit the post-capture workflow through the extremely high read speeds it provides.”

SanDisk unveiled a 1TB SDXC card back in September 2016, but that card has yet to materialize and hit the market.

ProGrade Digital is a fledgling memory card brand that was first announced in February 2018. The company was founded by memory card industry veterans, including former executives at Lexar.