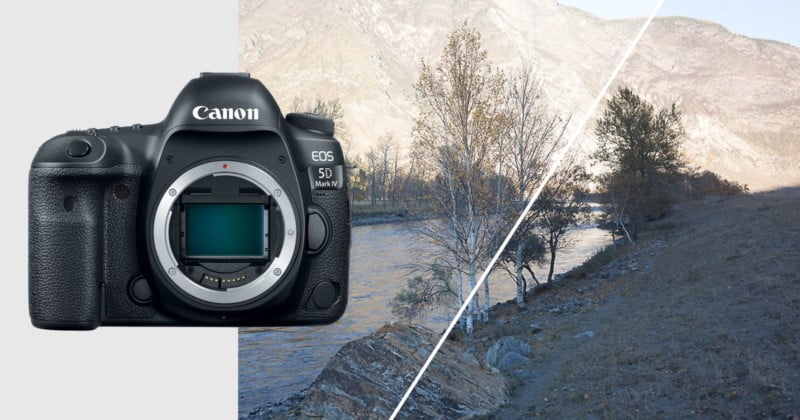 DPRSplit is a new utility by LibRaw (the makers of FastRawViewer and RawDigger) that lets you squeeze extra dynamic range out of Canon 5D Mark IV RAW files. It may sound like magic, but the program works by separating the data captured by the DSLR’s Dual Pixel sensor.


“Canon 5D Mark IV’s sensor has a somewhat unusual pixel arrangement: each pixel is composed of two subpixels,” writes FastRawViewer. “If Dual Pixel RAW mode is enabled in the camera, the resulting CR2 file contains two images, or two frames: one composite, made from reading both subpixels, summed; and the other is made out of one set of subpixels.”

Canon officially designed the system this way to allow its Canon Digital Photo Professional software to use the parallax between the subpixels to do things like focus micro-adjustment, bokeh shift, and ghosting reduction.

But what’s interesting is that one of the two subpixel frames “collects half of the light that the composite frame does, as if it was exposed one stop lower compared to the composite frame,” FastRawViewer says. “In essence, in Dual Pixel Raw mode, the camera records into one file some equivalent of two shots, bracketed by (approximately) 1 EV.”

Using DPRSplit, Canon 5D Mark IV photographers can extract the second frame (the 1 EV lower one) from Dual Pixel CR2 RAW files and save the frame as a DNG file. Here’s a screenshot showing the two frames extracted from a single Dual Pixel RAW file side-by-side in Photoshop:

DPRSplit “allows you to blend in the highlights from the A file into your normal A+B image, giving you 1 extra stop latitude where you clip highlights,” writes Canon News. “If you use this technique, the 5D Mark IV gains around 1 stop of usable DR making it one of the highest DR latitude cameras in the 35mm realm.

“Unlike bracketing or even pixel shift methods, this happens all in one exposure eliminating motion blur. There will be slight parallax error in between the two images, so be prepared to mask and edit selectively between the two files.”

(via Canon News via Canon Rumors)