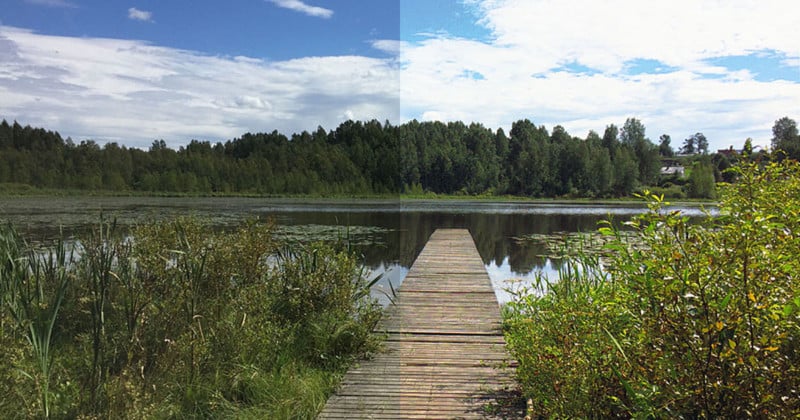 The scientists first trained a deep learning system on what makes a “DSLR-quality photo” by shooting photos of the exact same scenes using both smartphones (the iPhone 3Gs, BlackBerry Passport, and Sony Xperia Z) and a DSLR (a Canon 70D). Next, they also trained the system using a large set of DSLR-quality photos unrelated to the smartphone photos.

The results created using the large set of photos was superior in key ways to the set shot on-location with the DSLR, which “shows that training benefits from a data diverse dataset (different sources) of high-quality images with little noise levels, rather than a set of images from a single high-quality camera,” the scientists say.

So instead of using a giant dataset of original and enhanced pairs of photos, the system only requires a single set of photos from a new smartphone to operate since it’s trained using a set of high-quality photos that can be completely unrelated to the source camera photos.

Here are some before-and-after examples of how this neural network enhances smartphone photos:

As you can see from these sample photos, the neural network seems to have a bad habit of blowing out highlights (check out the clouds). These emerging technologies are continually refined over time, though, so perhaps it’s a weakness that will be addressed in the future.

While using AI to automatically enhance lower-quality photos is a problem that scientists across the world are tackling, these scientists at ETH Zurich say that their system’s advantage is being able to train itself for any new camera simply with a set of photos from that camera instead of using pairs of photos like traditional enhancement methods.

Want to try this neural network out yourself? The scientists have set up a webpage that lets you upload your own smartphone photos to see what the AI enhancement produces.

(via ETH Zurich via Engadget)

PSA: Scrub Geotag Data from Photos of Wildlife to Keep Poachers Away

This Music Video is a Weird Photoshop Editing Timelapse