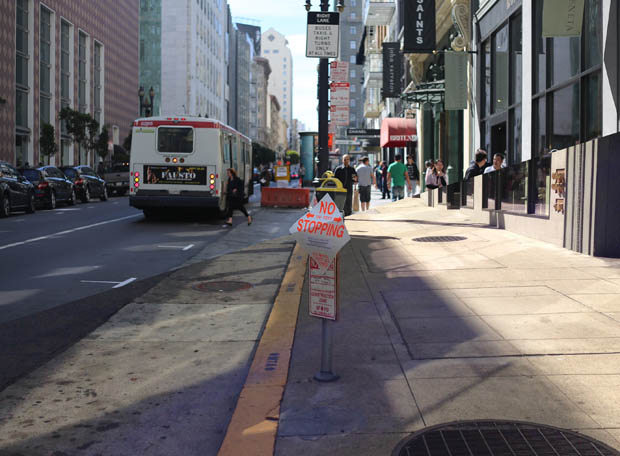 We live in strange and exciting times in which phone camera photos can be compared side-by-side with top-of-the-line DSLR photos without anyone laughing (too hard). Having just gotten his hands on a shiny new iPhone 5, photographer Dustin Curtis decided to test out its camera’s quality by pitting it against his Canon 5D Mark III (with a 50mm lens fixed at f/2.8).

I purposefully chose a composition that had a lot of harsh light and various colorful objects at varying distances. The metering and focusing on both cameras was spotted directly on the “no stopping” sign.

The results are pretty amazing – the iPhone takes worse photos but it certainly stacks up against a $4,000 professional camera. And, although the photos from the iPhone are significantly noisier, it has fantastic automatic metering.

Check out the full-res versions of the iPhone 5 photo and the 5D Mark III one to see the differences for yourself.

While the $3,500 DSLR obviously comes out on top (as it should), the comparison shows that phones are definitely getting to the point of being very respectable point-and-shoot cameras. With larger sensors and better glass — like Nokia is doing with PureView — phones appear primed for a jump to a new level of photographic quality in the next few years.

Phones these days can probably shoot better photos than many of the top-of-the-line digital cameras from over a decade ago. How long do you think it will be until future phones can actually beat a current 5D Mark III in a head-to-head shootout?

P.S. A similar comparison was done a couple of months ago using a Nokia PureView 808 and a 40MP medium format DSLR.

Update: Austin Mann over at TREK has a great review that shows off the new camera’s low-light performance (via Engadget): XQD a No-Show at Photokina, SanDisk Opts to Avoid the Format

Autographer is a New Wearable Camera that Automatically Documents Your Life