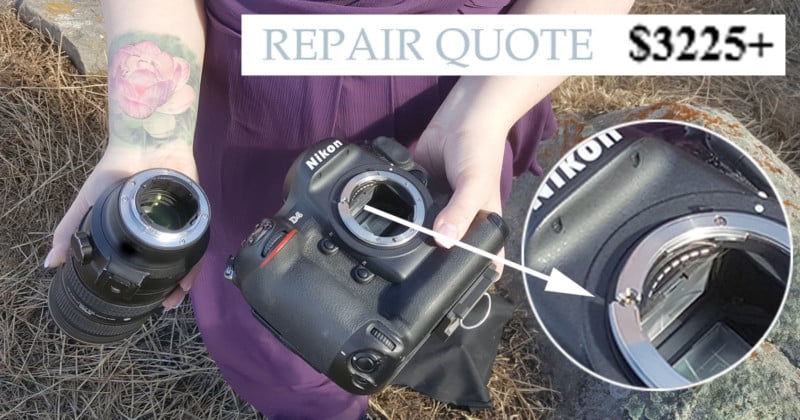 My name is Brandie Sunley, and I’ve been working full-time as a portrait and event photographer for nearly eight years. It’s been a massive learning curve getting into this industry, and a lot of things had to be learned the hard way. The following story is one of those hard lessons…

I’m hoping that as I share my experience, there are photographers who can learn from it and possibly prevent their own heartache and headaches. This is the story of how I smashed my camera…

Last month, I was working a wedding with my business mentor and associate, Edward Ross. We are based out of Calgary, Alberta, and we have the incredible good fortune of being able to shoot in some unbelievably gorgeous locations. One location, called “The Big Rock,” is a glacial erratic — a huge boulder in the middle of a prairie that was left behind as the glaciers receded millions of years ago. 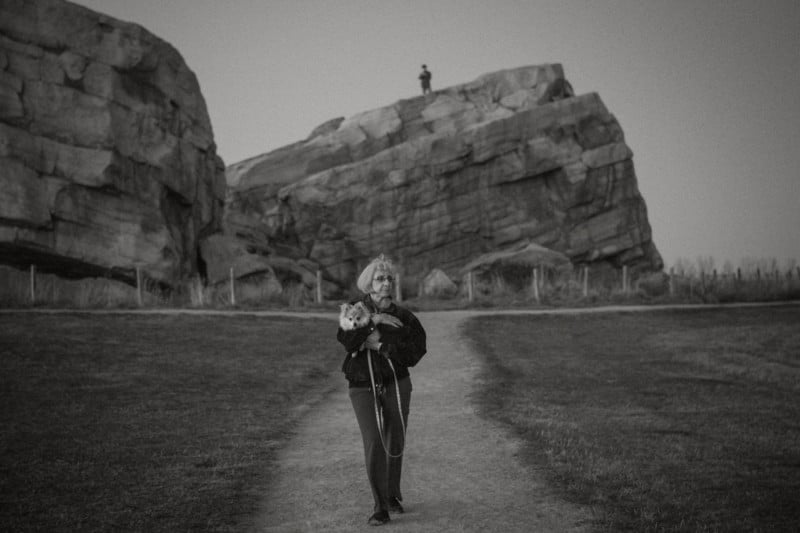 We brought the wedding party out to the rock to do some shots of the prairies and the sky. For this wedding I was B camera (i.e. second shooter/assistant), so most of my job is holding, carrying, helping, lighting etc.

One of the great features about the rock is that you can climb up on top of it. This allows for some pretty amazing angles, as well as some epic shots for your bride and groom if they feel like climbing up to the top.

I find for many shots, it’s always a balance between risk and reward. I never want to put my couples into situations that are too risky, but I am a bit of a daredevil and will climb and crawl into all sorts of places that I would not ask my couples to go. For this wedding, even though the couple are experienced rock climbers, I felt it would likely be safer for me to get up higher than to ask a bride in a gown to climb very high.

The initial step up to a ledge on the rock is a bit of a scramble, so I unhooked my cameras and handed them to members of the wedding party as I got through that first bit. Once I was up, I had the cameras handed back to me, clipped my cameras back on, and stood up to get a better view of where I wanted to be. Once I had spotted my goal, I started crawling/climbing towards where I needed to go.

Keep in mind that there is a wedding party of 10 or 12 all going around the base of this rock, as well as the main photographer and various other visitors to the site.

As I am doing my crawl, I feel a camera let loose and start to tumble down the side of the rock.

“Oh s**t!,” was all I could manage as I helplessly watched it slide and then fall. I was truly hoping that maybe it would stop sliding before the edge, but it rolled and gained momentum as it got closer. At the base of the rock, the camera miraculously landed in a very small grassy patch, but it wasn’t soft enough to completely absorb the fall or have the camera come away unscathed.

This groomsman is at about the point I was at when the harness released and the camera began to tumble: 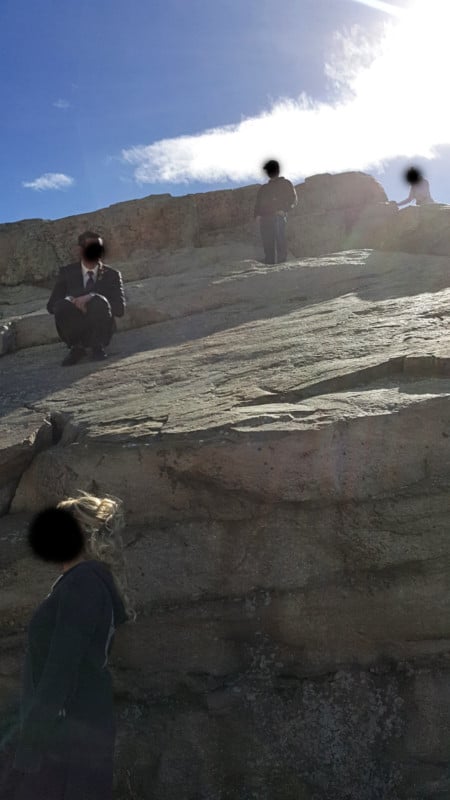 Initially, this is what I retrieved: 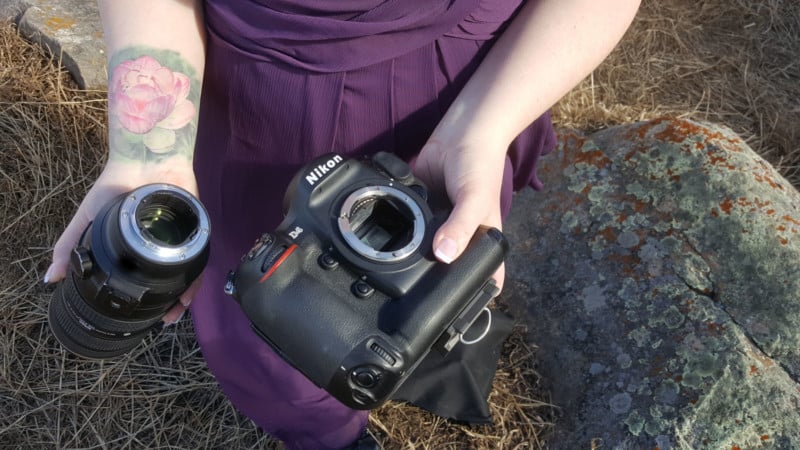 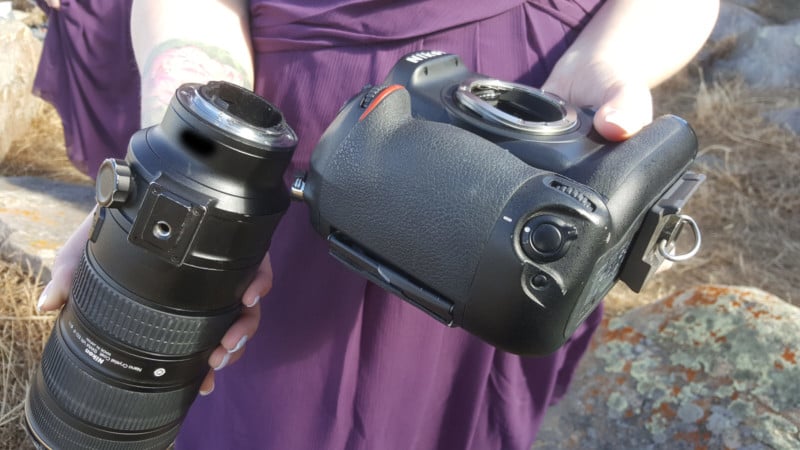 Things are not looking promising. Yeah, these definitely are NOT good signs at all: 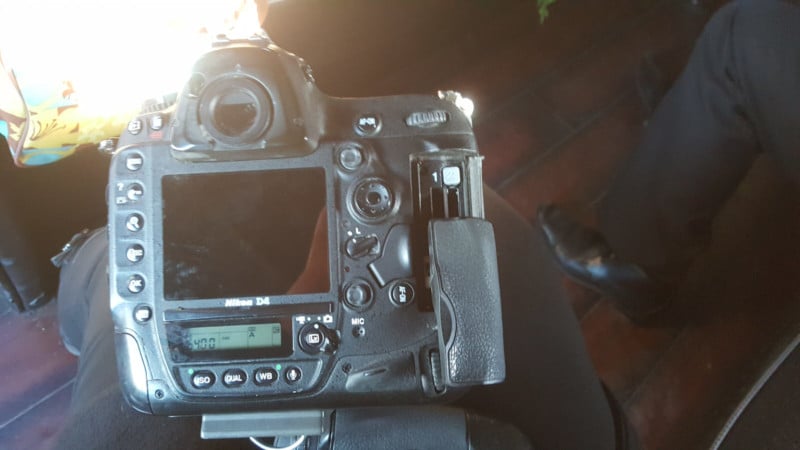 I tried to put the 70-200mm lens on another body to see if it still functions, but found it wouldn’t even mount to the other body. Then I tried attaching it to the D4 again, and voila! It fits!

…except there’s no aperture control. It’s stuck at f/22… As we take the long slow ride back to the reception hall, I see what I can do with long exposure and high ISO. Yeah, it’s not focusing either… Might just call this an artistic shot that captures the “mood”. The lens is starting to look like a very expensive paperweight at this point.

My biggest concern at that time was that the memory card was still good. I put both cards into my other body and checked them. Everything was A-okay. Pulled them out and stored them for safe-keeping — you never want to tempt fate.

The rest of the evening still went well. I always carry two cameras and a range of lenses. In this case I ended up using my 105mm or my 14-24mm for a lot of the events at the dance, dinner. Of course, this means being super aware of my focus and doing a lot more moving around to zoom in and out, but it’s certainly do-able. The bride and groom still got awesome photos from the whole day, and had they not been around to see it happen, they never would have known that I smashed a camera in the middle of it.

Afterwards, I took the camera and lens in for an estimate on repairs. At this point, I had to make a decision. I have an insurance policy that only has a $350 deductible, and a replacement vs current value coverage. Looked like a no-brainer to me. I was going to wait until there was a massive upgrade in Nikon’s flagship body — most likely the D6 — but I wasn’t going to complain about replacing with the D5, so I filed a claim with my insurance to see what they would say “Repair? Or Replace?” After dealing with my insurance, I also thought it might be worth talking to the strap manufacturer. I know of two other photographers, personally, who have had issues with the straps or hardware that resulted in damaged equipment, and both of them were taken care of by the strap company (i.e. the strap company covered the repair costs).

After some back and forth emails, the strap company said that basically they aren’t obligated to do anything for me because I didn’t have the original hardware/or their approved hardware (base plate and screw) in my camera so they couldn’t guarantee that their strap system would work properly. The reason for the different hardware was the fact that I kept having near misses with the original screws — they would come loose from the body of the camera throughout the day and I would almost lose cameras on several different occasions. I put longer screws with tripod plates on instead, to prevent the loose screws from happening. It actually worked quite well for several years, until my accident.

The strap company did, however, offer to send me a new strap setup so that I had an improved version that has a few safety features that my version didn’t have and most likely I wouldn’t experience a similar failure with their new system.

One other unfortunate twist to this whole tale is that my insurance came up for renewal just a few weeks after my claim was filed. As much as I tried to argue with the insurance company over it, they refused to renew my policy, even at a much higher rate or with a much higher deductible, regardless of the fact that I have never had a claim before. Apparently, making a claim creates an incredible black mark for your risk factors and it follows you for three years.

So, as I write this, I am shopping for some sort of policy. (Just FYI, my policy was with a separate company than my home, auto, etc. It wasn’t just a rider on an existing policy.)

What I have learned or what has been reinforced by all of this are the following things:

I hope that reading my experience is (or will be) helpful to some of you out there.

About the author: Brandie Sunley is a wedding photographer and a Photography Associate at Edward Ross Photography. You can find more of her work on her website and Instagram.

Use Deliberate Practice to Find Your Photographic Style