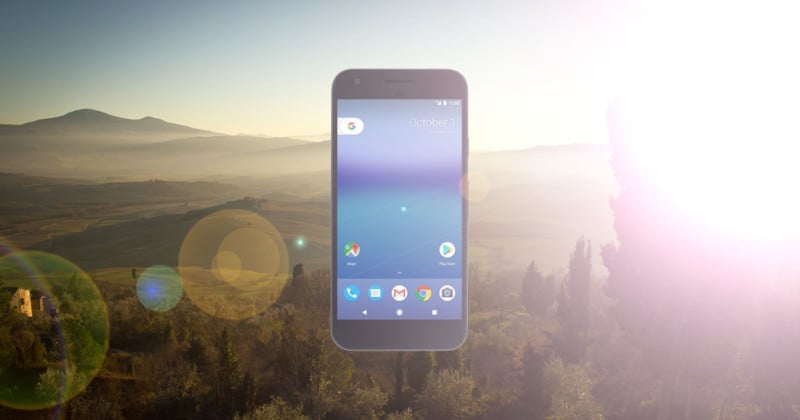 Google says its new Pixel smartphone has the best smartphone camera ever made, but it looks like the company still has some issues to work out. Pixel owners are reporting that the camera sometimes captures annoying lens flares in photos.

The problem was first reported yesterday on Reddit and in Google’s Pixel User Community forums.

“Most of us have been noticing an issue with the camera – rather extreme lens flaring happening when a light source is glancing off the side of the camera,” a Pixel owner named tusing writes. “All store units our group has tested are exhibiting the effect; all RMA and return units are also exhibiting the effect […] the overwhelming majority is able to reproduce the effect.”

“Troubleshooting steps, such as factory resets, Camera app rollbacks, and safe mode do not have any effect on this effect. This is clearly an issue with the camera itself.”

The flare shows up as a halo spanning a section of the frame, as these example photos on Twitter show:

Some kind of lens flare on the #GooglePixel camera in low light pic.twitter.com/VI1sIks71r

Google acknowledges lens flare issues on Pixel, working on a fix to be released 'in the next few weeks’ https://t.co/x3LWR30afH pic.twitter.com/uQcqqddcRx

Others owners report that photographing the exact same scene with other smartphones doesn’t create the same lens flare.

Google’s camera product lead, Isaac Reynolds, quickly responded to the complaints by confirming the problem and promising a fix.

“First, for some background — flare is a property of ALL camera lenses,” Reynolds writes. “However, we have seen reports about this ‘halo/arc flare’. This is the specific kind of flare that appears as a bright/low-contrast arc in the corners of the frame.”

What’s interesting is that even though the flare may be caused by the hardware design, Google is planning to correct the flare using software.

“You can expect a software update in the next few weeks that will improve the effects of this issue,” Reynolds says. “We’re working on some algorithms that recognize the halo/arc flare, characterize it mathematically, and then subtract it from the image.”

The bad news is, because each Google Pixel is manufactured to exact specifications, every Google Pixel will have this flare — getting your phone replaced won’t do anything. Also, the future software fix will require you to shoot in HDR+ mode if you’d like to have the flare removed digitally.

“…by doing things in software, we are able to make Pixel’s camera even better over time,” writes Reynolds. “This is one of those ways.”

These Star Wars Artworks Were Made by Photographing Action Figures