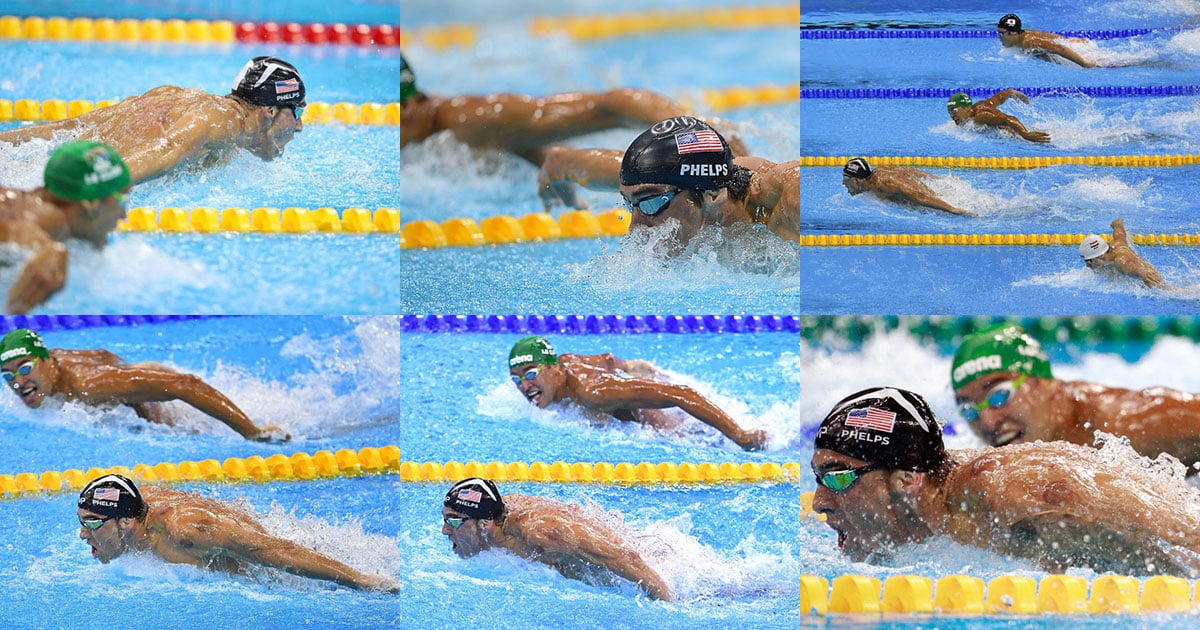 It may seem counterintuitive, but even a sports action photo can tell a story in a 1/1000th of a second, and the Rio Olympics men’s 200m butterfly final provided a perfect opportunity to analyze the role of not only the decisive moment, but decisive position in telling a story.

In the much-anticipated rematch of the men’s 200m butterfly at the 2016 Rio Olympics, Chad le Clos spent much of his time playing mind games staring down Michael Phelps both in and out of the pool. He spent the moments before their semifinal race shadow boxing in front of Phelps, who responded with a meme-worthy #PhelpsFace death stare. 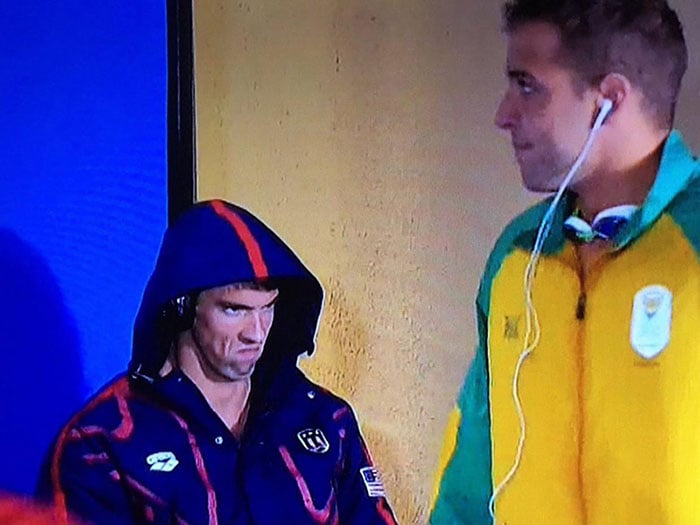 So the narrative entering the finals was whether Le Clos had awoken the sleeping giant, and would pay for his indiscretion. How could a single photo encapsulate that?

David Burnett’s photo of Mary Decker from the 1984 Olympics is a stark reminder of the importance of position. Burnett intentionally avoided the finish line, positioning himself on the opposite side of the track. When Zola Budd jockeyed for position and knocked Decker off the track, Burnett was the sole photographer in position to capture the decisive moment.

The swimming venue is a bit more restrictive. The pool is capped on opposite sides with a throng of photographers representing various news agencies and wire services from around the world. A few photographers have the opportunity to set up underwater cameras, but for the most part photographers are restricted to a single position. Where you’re positioned matters, as we’ll see in a moment. Most photos of the race that you’ve probably seen are from the last 50m of the race. I watched the event live, and subsequently saw what I thought was a singular iconic photo of Le Clos glancing over at Phelps mid-stroke. But as we’ve already seen, there were dozens of photographers to Phelps’ left, and thus many different images of the same moment.

Yahoo! exclaimed “See the exact moment Chad le Clos regretted provoking Michael Phelps,” while The Huffington Post went with “The Momend Chad Le Clos Realized Michael Phelps Would Win.” But in rewatching the video, it turns out that Le Clos glanced at Phelps at least five times on the final lap. So depending on the photographer’s position there were numerous opportunities to capture the “decisive” moment.

Digital arguably gives us more variation in the look of an image than film. Although I’m seeing less variation in white balance than some of the other venues, photographers and/or their photo desks are dialing fairly different levels of saturation and sharpening. Even exposures are off by up to a stop by my estimation. Some photographers “expose to the right” and avoid blowing highlights in the water, while others are more content to get the expose for the subject. The pool offers a significant dynamic range for photographers to contend with.

In this Instagram world, the audience has also become accustomed to fairly significant increases in saturation and contrast – such that it’s arguable that the most life-like images look flat.

Let’s start with the obvious. Photographers positioned to Phelps’ right had a reverse angle. Because Le Clos had to turn to his left to see Phelps’ these photographers would never get “the shot.” PA Photographer Mike Egerton covered the race from Phelps’ right and captured this image. Egerton most certainly captured images of Le Clos turning his head, but from this position, all you would see is the green cap with no face.

Ahead of the Action

Christophe Simon was positioned in front of the swimmers when he captured this image. Being in front creates visual ambiguity over who was leading – never mind that Le Clos’ head isn’t turned. If you take a few seconds to analyze the photo, you can most likely discern that Phelps was leading at this point, but I would venture to guess that most people don’t undertake such an analysis.

Martin Meissner caught this lovely photo of four swimmers, including the eventual silver medalist Masato Sakai in lane 7. There is a certain graphic construction to the image with the rod straight lane lines popping in blue and yellow. And of course, the image foreshadows a preoccupied Le Clos about to be overtaken by Sakai. But it loses some of the drama of the tighter two lane photos. Note the heavy saturation.

Pascal Le Segretain caught one of the moments where Le Clos glanced at Phelps. A really nice composition aided by a fantastic depth-of-field – narrow enough to isolate Phelps and a few drops of water hanging above him, while keeping Le Clos sharp enough to see his face. But because Segretain is seated ahead of the action, the distance between Phelps and Le Clos seems closer than reality. Does it matter? That depends on the weight you give to Phelps’ complete trouncing. Again, note the high saturation and brighter exposure.

David Ramos caught the glance almost directly in front of his position, which (most accurately conveys Phelps’ lead (like Meissner’s image) and the futility of Le Clos’ chase. This particular image has a medium saturation, but much more exposure than the other images. The exposure opens up some of the shadows on the swimmers, but blows some of the highlights on the splash.

Adam Pretty has a near pool level image that is the tightest of any of the images, giving the moment a certain intimacy. Phelps’ cupping bruises are very visible, and because of the angle, the sheeting water from his back is placed against the dark of Le Clos’ skin heightening the drama. Phelps’ straight-ahead stare is in stark contrast to an almost desperate glance from Le Clos.

Having dozens of photographers covering the same event from near identical positions gives us an interesting perch to discuss the notion of the decisive moment. As we’ve seen with these examples, some photos are more successful than others, but no single photo can factually represent the decisive moment because as far as the glances were concerned, there was none.

Arguably all of the glancing photos successfully capture the “story” to varying degrees, but it’s unclear that any single photo will end up being as iconic as our memory.