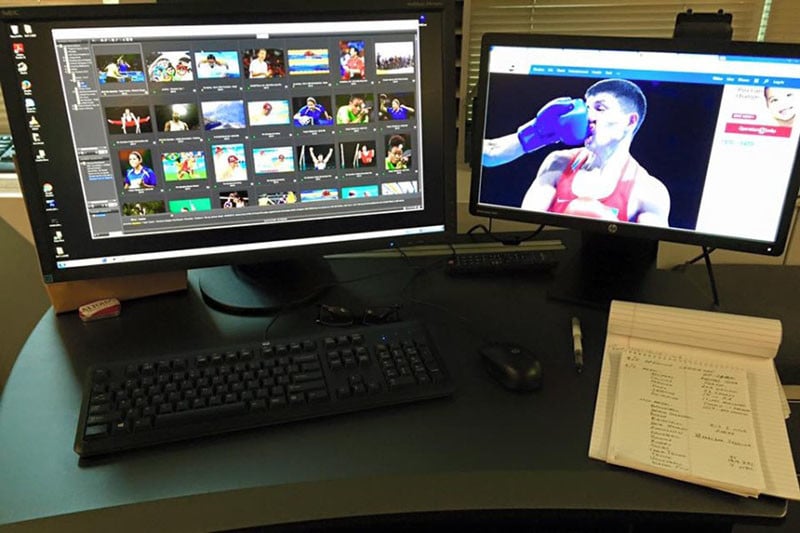 Brad Smith has spent a career editing sports photography. First as a sports editor at Sports Illustrated, then as a senior sports editor at The New York Times, and most recently a return to SI as its Director of Photography. But for the next two weeks, he is editing the 2016 Rio Olympic Games photography for ABCNews.com and putting together a daily slideshow of the best images.

How selective is he? An image has about a 1 in 500 chance of being selected by Smith, which is more competitive than getting into Stanford (1 in 20), and about on par with catching a foul ball at a baseball game (1 in 563).

I spoke with Smith as he was heading to work for Day 4.

How many images per day are you looking at?

I’m going through [screens] that are loading 20 images per page, and I’m looking at every page within seconds. Part of it is because I kind of know what I’m looking for. When I get [to ABC] at 1pm, I build a gallery immediately with about 8 images from the morning, and I’ll add about 40 more during the course of the day. I also have a schedule [of events], and I know what sports are going on and what to look for.

Once I have a great swimming photo, now I’m just looking for equivalent or beat that photo.

ABC isn’t covering the Olympics, they have no horse in the game, they have no photographers, so the agenda is to just pick the best photos. 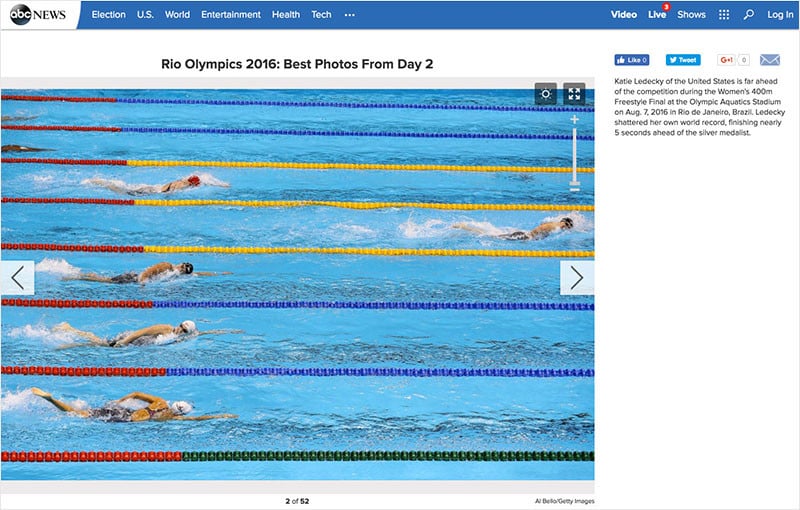 Can you describe how the images come in on “the wire”?

Images are [available] on a subscription basis. You can’t look at them unless you subscribe. [ABC] gets sports from those feeds. Everything that is categorized by one of those agencies and earmarked as a sports photo is coming across the ABC feed. I’m not sure what program they are using, but the images are coming in in real-time.

In [Michael] Phelps’ race the other night when he won the relay, within 180 seconds, I saw the first frame of Phelps. He swam the second leg, so there was actually a picture of him on the poolside that came in just as the race was finishing. The Olympics is one of those events – like the Democratic or Republican Conventions, or the Oscars – where speed is just as important as the quality itself.

Have you seen any iconic images yet?

I’d say that I’m still waiting for that great iconic image that’s really going to tell the story of the whole Olympics.

Are you seeing any visual trends?

I would say for the most part, it looks like London, which probably looks like Beijing in a lot of ways.

The only thing that has significantly changed is the quality of the equipment that the photographers are using. As the equipment gets better, one would assume that the images have the potential to be better.

As an editor, can you tell that the equipment (e.g. AF, sensors, dynamic range) has been getting progressively better?

What I’m looking at are, in theory, the best of the best, so it’s not always easy to answer that question because I’m not looking at the RAW files [and the full take]. But I can’t imagine that it’s not. You get a higher percentage of quality images that gives any particular editor more to choose from.

As editors, we used to count on lots of out of focus frames to speed the process along, but now there are less of those.

The other thing is that no matter how bad the internal or external lighting is, the cameras are picking up details that they couldn’t have gotten years ago. Even someone literally sitting almost in the dark, you can pick up details in the skin tones, uniform color. You pick up these highlights, and they’re beautiful. And all that does is add an extra element, an artistic element that gives me another layer to look at.

Are you consciously trying to maintain a ratio of action vs. non-action?

Action isn’t secondary, but action is not the most significant moment at the Olympics. The lasting images when you think of the Olympics – if you really go back and pick the 10 most iconic images from the Olympics – there’s a lot of emotion and feeling and personal investment in those images that is not just simply someone jumping in the air.

It’s Mexico City with the hands raised. It’s Mary Decker by David Burnett. There are images like Heinz Kluetmeier image of Phelps with the underwater camera is definitely [an action photo], but Heinz’s more famous photo is the 1980 Winter Olympics and the [USA’s Miracle on Ice] hockey team. It’s not an action photo, it’s those guys jumping up on the ice.

I think the [emotional] photos become the better photo than the actions themselves. I’m not conscious of trying to pick one or the other, but I’m definitely gravitating towards the feelings.

Do you feel a responsibility to show less popular sports?

I felt zero pressure to [show the popular sports]. My agenda given to me was simple: Just pick great photos. So I could care less whether it came from field hockey or Carmelo Anthony playing basketball. A great picture is a great picture.

I’m just looking for great photos, and that’s one of the beauties of it. I’m able to expand [the view], and it’s not just what our sports world is dominated by: which is male-driven athletics. The Olympics gives me an opportunity to split that down the middle.

What do stills bring that video does not?

They create an impact and it creates a permanent spot in your brain that video does not. When I think about sports, and I think of covering sports, the still images stick in my head. It’s not like I don’t remember video, but it’s not the video that I remember.

I’ve seen some images that seemed like they were overly processed – the type of image that would be disqualified from a photo contest. Are you trying to be conscious of manipulation [staged, Photoshop, etc]?

I’m not sitting at the venue, but i can tell you if i saw one image like that, I’d be suspicious and shy away from it. Once I run it, you can’t take that down – it’s up there forever. But I can tell you that there were literally 100 images from different agencies using that same little spot. So there is an area somewhere that’s possible. If it was the only one I saw in 75,000 photos, I’d be suspicious too.

You can kind of see certain [images] are set up – they stand out. You don’t see a lot of them, but If i see things like that i try to avoid them.

You are NOT hard up for images. There are so many great images, so many real emotions, you don’t need to make stuff up. If you do, I feel sorry for you whoever is doing this because it’s not the least bit necessary.

Author’s note: This interview has been edited and condensed.