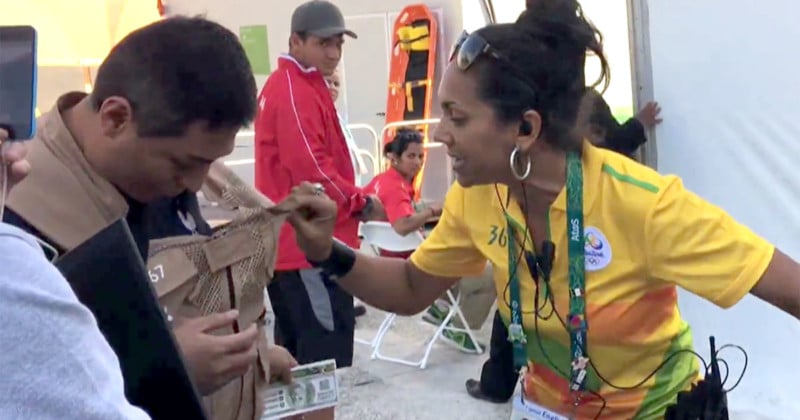 News Corp photographer Brett Costello was robbed of $40,000 in camera gear at a cafe in Rio a few days ago. Then yesterday, while covering an event at the Olympics yesterday, Costello spotted the thief pretending to be him.

While at the cafe on Thursday, Costello was approached by a woman who began speaking to him in Portuguese. As he was distracted, her accomplice grabbed his rolling case filled with high-end camera gear and took off in a getaway car.

A CCTV security camera at the cafe caught the whole thing as it unfolded:

Fast forward a few days. Yahoo Sports reports that while Costello was entering Sambodromo stadium yesterday for the men’s archery competition, he noticed another man entering behind him wearing an official photo vest.

But not just any vest: Costello’s stolen photo vest.

Costello noticed that the number on the front of the vest was his number, and it dawned on him that the man was wearing the same vest that had been taken from him at the Rio cafe the day before.

After being confronted by Costello and security personnel, the man took off the stolen vest and began to walk away. He was quickly detained by police for questioning.

Here’s a video of the confrontation and take down:

Thanks to Costello’s sharp eye, the suspected thief was nabbed before he could steal more pricey camera gear from inside the secure media areas of Olympic venues. Unfortunately, there’s no word on whether Costello has any hope of recovering any of the $40,000 equipment he lost.

Update on 8/8/16: Canon USA tells PetaPixel that Canon CPS covered photographer Brett Costello with loaner gear immediately after his $40K worth of equipment was stolen, allowing Costello to continue his assignments at the Rio Olympics without a hitch.

Ep. 96: Shooting the Olympics in Rio…and Trying Not to Get Robbed – and more