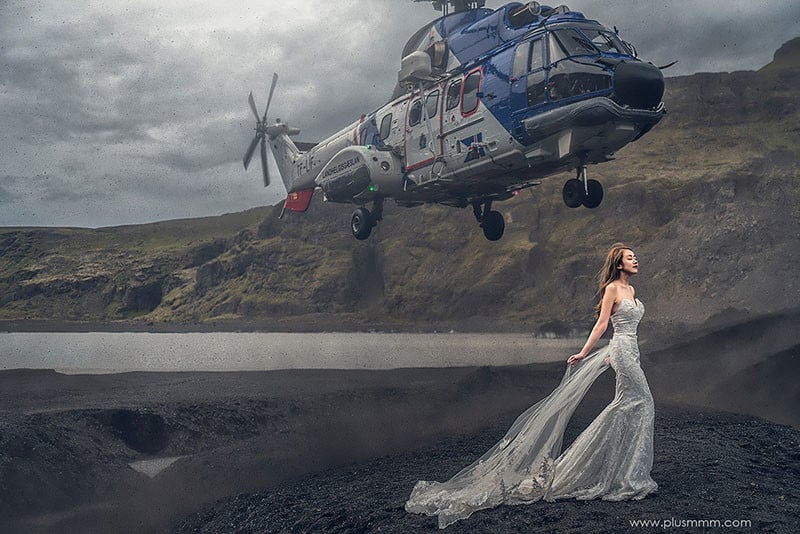 The bride managed to hold her serene pose just long enough for Leung to capture the photo above, but the powerful downdraft knocked her off balance just a moment later:

It was a “dangerous shot,” Leung says, saying it was the first time he has felt such danger during a shoot. Here’s a clip of the crew reviewing the shot on a Sony mirrorless camera afterward:

“Whoa. That was close. That really was very close,” they can be heard saying in the video.

Here’s a 2-minute behind-the-scenes video of the day’s shoot (including the clip you see above):

Needless to say, even if you have a helicopter and a fearless bride at your disposal, this probably isn’t a wedding photo idea you should try yourself.

Update: It appears there has been some confusion and miscommunication regarding this photo shoot. It turns out the helicopter was not a planned part of the shoot, but rather one that had been in the area to rescue a man who had fallen down a cliff.

Leung just happened to photograph the Icelandic Coast Guard helicopter as it flew past, and rescue personnel on the scene were there to ensure that people on the ground were safe during the operation that ended up as an unusual wedding photograph. We’ve edited the post to reflect these new details.

Update: Birgir Örn Sigurðsson, a member of the Víkverji SAR in Vík, Iceland, was on the scene during this photo shoot for the rescue operation. He sent in this photo showing where the helicopter was prior to taking off from the other side of the body of water:

Sigurðsson says the helicopter didn’t fly directly over the bride and was a relatively safe distance away. Some of the apparent closeness may have been due to how the photo was captured.

Image credits: Photographs by CM Leung and used with permission

This is the Crazy Camerawork Used to Shoot Car Chase Scenes