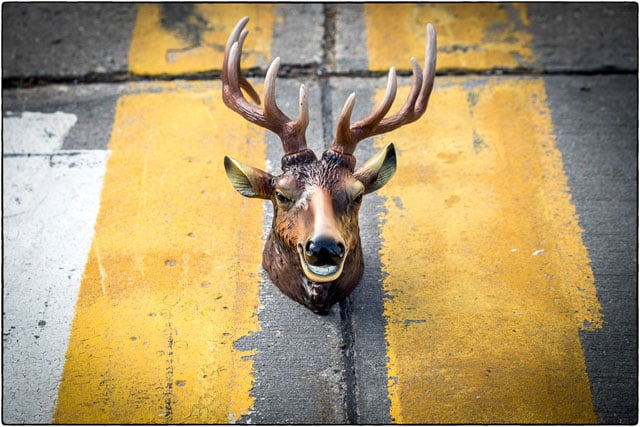 Let me begin by saying that I’m not a hunter. But I am surrounded by hunters because I live in Minnesota. I’ve heard countless stories about deer hunting from co-workers and friends, but the most interesting story was from a seasoned hunter who told me that now he only hunts for a “trophy buck” because he’s hunted everything else and he’s only interested in getting “the big one”.

He goes on to describe what the big one may look like – broad shoulders, big neck, and apparently the size of the rack doesn’t matter. When he goes hunting he may let herds of less attractive deer walk by during the course of a weekend without lifting his gun. This may sound like an elitist attitude, but it made me think about using this strategy in street photography.

It’s pretty easy to draw the metaphor of street photography to hunting. Both require the use of your various senses to track down your prey and pull a trigger. You have virtually no control over your environment and are at the mercy of the weather. And both activities involve specialized equipment to be successful.

I just returned from a four week trip to China where I shot street photos in seven different cities. In each of these cities I noticed I was seeing the same shots over and over again with only slight variations. I started thinking about the “trophy buck” strategy of hunting – where I would only raise my camera for the “great” shots and walk away from the ordinary shots.

Like a lot of street photographers, I come from the school of “digital spray-and-pray”. I would shoot a LOT of photos and then separate the good from the bad during processing. Some days I would see a 10% hit ratio, while other days would yield only one keeper.

I learned that searching for the trophy buck on the streets requires both patience and risk. Getting in close for an intimate image that captures facial emotion is a risky maneuver, but if done well it usually pays off.

Toward the end of my recent trip I decided to implement the trophy buck strategy by using an internal filter for scenes I considered “too small” or “ordinary”. These shots I would walk away from. And there were a lot of them.

(I guarantee if you got this far in the article that I’m about to insult someone out there, so let me be clear: these are my filters and people should shoot whatever makes them happy. I’m not a member of the street police attempting to define the boundaries of the genre.)

– Anyone holding or using a cell phone. That includes about 90% of China. It’s like hunting squirrels with a shotgun. Too easy.

– Street performers. Too common and easy.

– Homeless people or beggars. Let them keep their dignity.

– The all-too-common juxtaposition of a person against a billboard or sign. Yawn.

– Street markets. I’ve gotten some great shots at markets, but it’s time to move on.

– The back of people’s heads isn’t very interesting unless they’re staring at something incredibly profound.

– I use to shoot a lot of photos of children in China because, well, they’re just so gosh darn cute, but now I’m slowing down on that.

So what’s left? This is my list of potential “Trophy Bucks”:

– Cultural anomalies and visual paradoxes. These are relatively easy to find in China, but you still need to dig them out of the urban landscape.

– Factory photos. I take a lot of factory tours for my “day job”, which gives me access to some interesting sights inside Chinese factories. Technically not exactly street photography. Yes, I always ask for permission to take photographs.

– Clever (but not trite) reflections. I haven’t done many of these types of photos, but I’m always looking for the opportunity. I just don’t want to rip-off HCB’s puddle leap photo.

– Some of my favorite photos are actually street “portraits”, which I still love doing.

– Because there are 1.3 billion people in China, there are a lot of people searching for their own identity in the crowd. They just want to stand out. These people make for interesting subjects.

– Smoke and steam fascinate me. They add an interesting element to most images.

– I love shooting in kitchens in Chinese restaurants. It’s always full of surprises and the cooks love being photographed.

– There’s a public park I go to in Yangjiang, China where the city’s really old people hang out all day. They play cards and tell stories. It’s ground zero for some amazing street portraits.

– About a year ago I started using a flash at night to grab some faces-in-the-crowd photos. It takes some big stones to fire a strobe in a stranger’s face, but so far I haven’t had my ass kicked.

– I tried shooting in the rain (with a flash) on my last trip. That was new for me.

– Shallow DOF photos, which are a challenge to focus on the move, but do a great job of separating the subject from a busy background. These are probably still a spray-and-pray project just to grab focus.

When I first started implemented the trophy buck strategy in China I felt paralyzed because I wasn’t taking very many photos. I walked for kilometers and kept saying nope, nope, nope. But when I did see a worthy scene or subject I found myself taking a lot of shots of good material. I worked the scene more.

This reminded me of my favorite photo book, Magnum Contact Sheets, which illustrates how the masters spent a lot of time working a single scene. In the past I might grab one or two shots of MANY different scenes, but now because I was filtering my potential subjects I was focused more on the good stuff. This may seem pretty obvious to some people, but it was a “ah ha moment” for me. Less is more. I felt I had a filtering process before, but now it’s more formal and refined.

After reviewing the shots from my trip in Lightroom I discovered I had a few good “series” of images that gave me some good choices. I had fewer (crappy) photos to review so it was easier to find the keepers. Sadly there were no award winning photos this time, but if I keep looking for the elusive “trophy buck” and ignore the ordinary-looking herd maybe I’ll get one soon.

About the author: Jim Hofman is an industrial designer and photographer (street and studio) who has been traveling to China for the last 30 years, with an average of 5 to 6 trips per year. You can find a collection of his work on his website.

B&H Sued by US Government for Discrimination