A deer hunter whose trail camera went missing was amazed when he discovered where it was; wrapped around the antlers of a giant buck.

Rancher and farmer Jake Mitchell didn’t think much when he noticed one of his trail cameras was gone from his property in southwest Kansas where he grows crops and runs cattle.

That was until Mitchell’s cousin spotted a mule deer with an abnormal set of antlers. “He was just sitting out there on the neighbor’s land,” Mitchell tells Outdoor Life. “I didn’t really think anything of it because he was so far out that you couldn’t really tell what was on his antlers. I thought maybe it was a deadhead or another antler that he caught from a fight.”

Later on that day, Mitchell and his cousin spotted the buck again. This time it was much closer and the pair couldn’t believe what they saw through their spotting scope.

“I gave my spotting scope to my cousin and he’s like, ‘By God, that’s the camera!’” Mitchell says. “So it was on from there.” 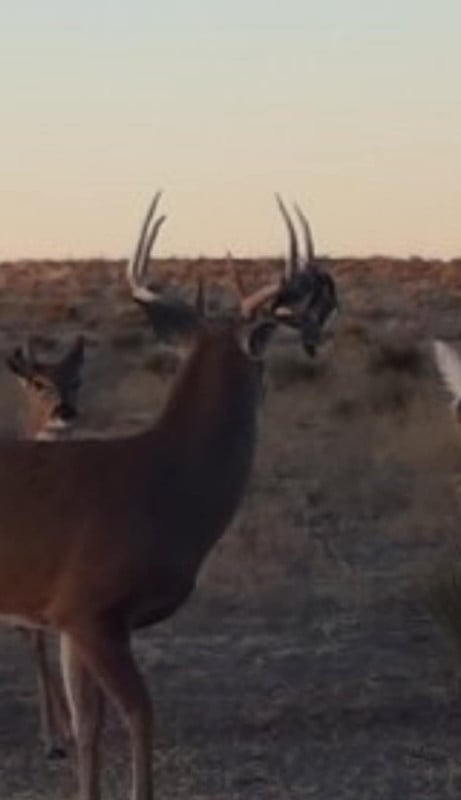 Mitchell’s farm in Kansas is typical for that part of the country, it’s wide-open and windswept with very few trees. So the only place the 22-year-old rancher can set up his trail cameras is on fence posts.

As noted by Outdoor Life, the local deer population will use these fence posts as scrapes which is presumably how the camera wound up on the eight-point buck’s antlers.

22-year-old Mitchell still had a landowner tag (permission to shoot a deer) so after discovering his missing camera was on a set of live antlers, he set about stalking the buck.

After striking the deer down, Mitchell walked up to find his trail camera wrapped around its right main beam.

The camera was broken and the SD card was not in its slot, so Mitchell couldn’t access the footage of the deer getting hold of the camera.

Mitchell later phoned his neighbor to explain what had happened. Amusingly, the neighbor knew all about it.

“The neighbor was giggling about it. He said, ‘We just saw him on camera with a camera, and we were like: Who’s is that and where the hell did he pick it up?’”