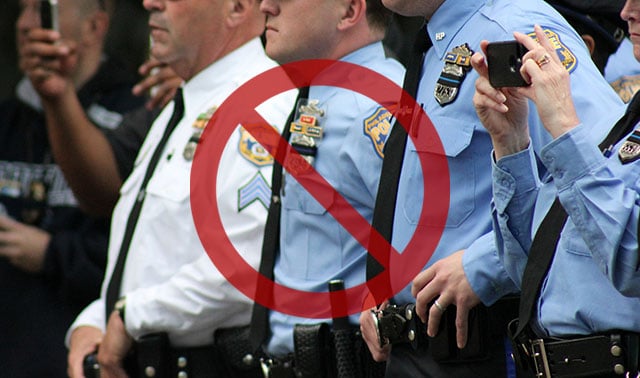 In a surprise decision in the US court system, a federal judge ruled last Friday that photographing and filming police officers isn’t always protected by the First Amendment.

Federal District Court Judge Mark Kearney writes that there is no constitutional First Amendment right to film or photograph police officers when that act isn’t accompanied by “challenge or criticism” of the police conduct. In other words, unless you’re opposing and protesting police actions by pointing your camera at them, the First Amendment doesn’t protect you.

Want to simply take a picture of police officers at work with no agenda in mind? That’s not protected free speech — at least in Judge Kearney’s eyes. Want to photograph while screaming at them during an arrest? You’re protected.

“Fields’ and Geraci’s alleged ‘constitutionally protected conduct’ consists of observing and photographing, or making a record of, police activity in a public forum,” Kearney writes. “Neither uttered any words to the effect he or she sought to take pictures to oppose police activity. Their particular behavior is only afforded First Amendment protection if we construe it as expressive conduct.”

You can read his ruling for yourself:

“We have not found […] any case in the Supreme Court or this Circuit finding citizens have a First Amendment right to record police conduct without any stated purpose of being critical of the government,” the court writes, “[…] we decline to create a new First Amendment right for citizens to photograph officers when they have no expressive purpose such as challenging police actions.”

“I don’t know of any other court ruling that requires journalists to announce their intentions while engaging in journalism,” writes Radley Balko of the Washington Post. “To do so would kill off a lot of investigative journalism. The same goes for most other protected conduct.”

An appeal is reportedly planned in response to Judge Kearney’s decision.

Image credits: Header illustration based on photo by Elvert Barnes

A Review of the $350 InstantFlex TL70 Instax Camera

This Demo Shows the Power of Having Dual Cameras on Smartphones