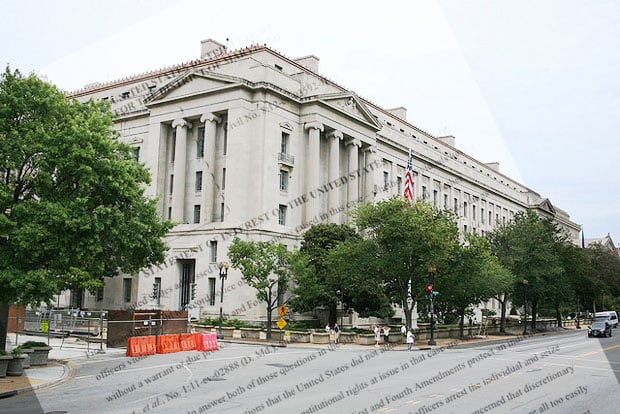 The US Department of Justice issued a statement this past Sunday that confirms the fact that the 1st, 4th, and 14th Amendment protect citizens’ rights to photograph police in public places.


The Statement of Interest document is a message to the US District Court in Maryland that it supports photojournalist Mannie Garcia in his lawsuit against the Montgomery County police. Garcia photographing police back in June 2011 when he was arrested and had his camera equipment (and photographs) taken away.

Garcia claims that he was photographing police responding to an incident involving two male Hispanic subjects, and that the officers didn’t like the lens pointed in their direction. He says that since they couldn’t arrest him for his photography, they beat him up and booked him for Disorderly Conduct.

By issuing its document, the Justice Department is saying that they want the case to go forward, and that they support Garcia’s constitutional rights.

The National Press Photographers Association reports that this is only the second time ever that the Department has issue this type of statement supporting the photographing of police in public places.

We first reported on Garcia’s lawsuit back in June 2012. The main story at the time was the fact that Garcia’s White House press credentials had been taken away due to the arrest.

Here’s what the Justice Department says in its filing under a section titled, “The First Amendment Protects Photographing Police Activity That Occurs in Public”:

It is now settled law that the First Amendment protects individuals who photograph or otherwise record officers engaging in police activity in a public place. Here, Mr. Garcia alleges that he was peacefully photographing what he perceived to be police officers using excessive force on a public street. If true, and we must assume that it is for the purposes of a motion to dismiss, this conduct is unquestionably protected by the First Amendment. Both the location of Mr. Garcia’s photography, a public street, and the content of his photography, speech alleging government misconduct, lie at the center of the First Amendment. By forcibly arresting Mr. Garcia and seizing his camera, Defendants stopped Mr. Garcia from photographing a matter of public interest and prevented him from distributing those photographs to the public. Yet, Defendants argue that the First Amendment does not protect individuals from such police action and the only “real alleged Constitutional violation” lies under the Fourth Amendment.

You can read the document for yourself here.