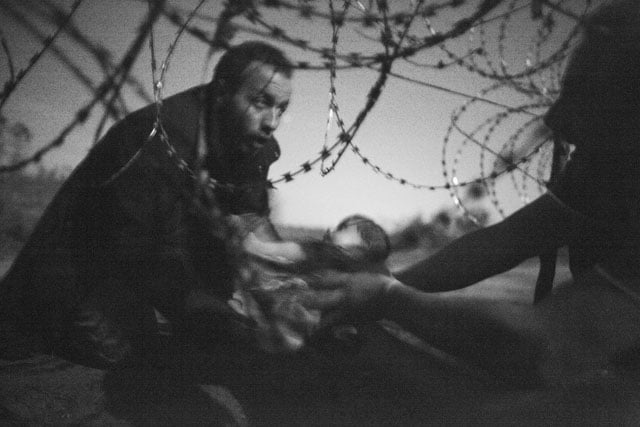 A year has passed since the controversial World Press Photo contest in which 20% of the finalists were disqualified the prestigious award was stripped from the winner, and today World Press Photo just announced the best news photos of 2015.

The Photo of the Year, shown above, is titled “Hope for a New Life” and was captured by Australian photographer Warren Richardson. It shows a baby being passed through a fence at the Hungarian-Serbian border in Röszke, Hungary, on August 28th, 2015.


Richardson’s photo was also the 1st prize singles winner of the Spot News category. Here’s his account of how the photo came about:

I camped with the refugees for five days on the border. A group of about 200 people arrived, and they moved under the trees along the fence line. They sent women and children, then fathers and elderly men first. I must have been with this crew for about five hours and we played cat and mouse with the police the whole night. I was exhausted by the time I took the picture. It was around three o’clock in the morning and you can’t use a flash while the police are trying to find these people, because I would just give them away. So I had to use the moonlight alone.

A total of 82,951 photos were entered into the contest this year by 5,775 photographers from 128 countries around the world. This was the first year the prestigious photo contest was governed by its newly drafted Code of Ethics, which reminds photographers of the ethical boundary lines when it comes to things like staging, captioning, and manipulating photos.

Here are the other 1st prize winners from the other categories: 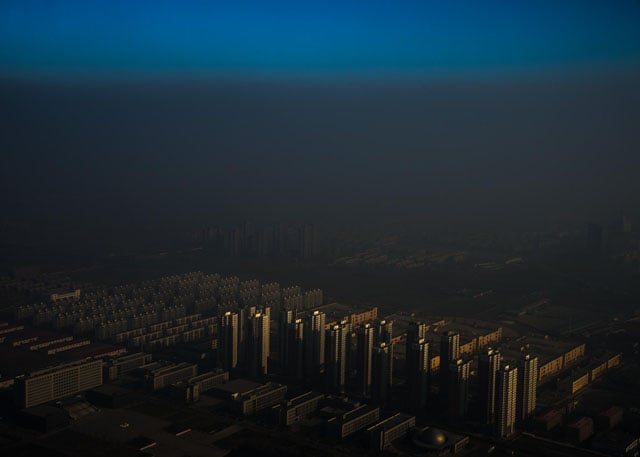 Haze in China by Zhang Lei of China
December 10, 2015
“A city in northern China shrouded in haze, Tianjin, China.” 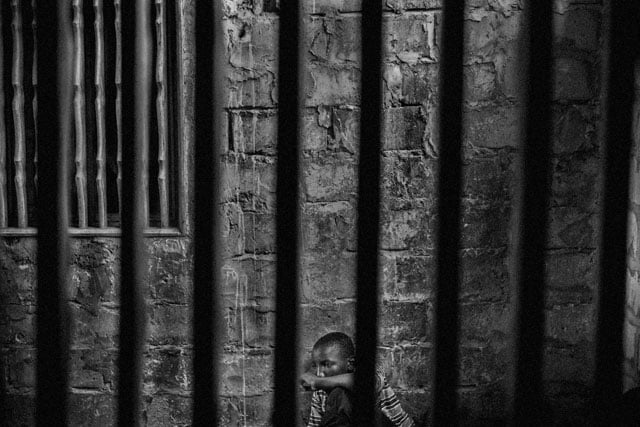 Talibes, Modern-day Slaves by Mário Cruz of Portugal
May 18, 2015
“Abdoulaye, 15, is a talibe imprisoned in a room with security bars to keep him from running away.

Series portraying the plight of Talibes, boys who live at Islamic schools known as Daaras in Senegal. Under the pretext of receiving a Quranic education, they are forced to beg in the streets while their religious guardians, or Marabout, collect their daily earnings. They often live in squalor and are abused and beaten.” 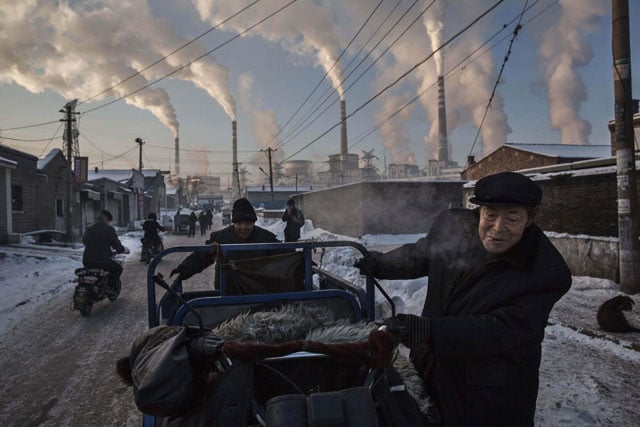 China’s Coal Addiction by Kevin Frayer of Canada
November 26, 2015
“Chinese men pull a tricycle in a neighborhood next to a coal-fired power plant in Shanxi, China.

A history of heavy dependence on burning coal for energy has made China the source of nearly a third of the world’s total carbon dioxide (CO2) emissions, the toxic pollutants widely cited by scientists and environmentalists as the primary cause of global warming.” 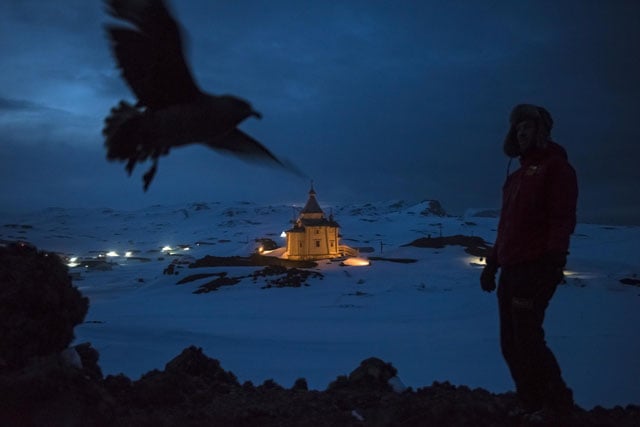 An Antarctic Advantage by Daniel Berehulak of Australia
November 28, 2015
“A Chilean scientist walks above the Russian Orthodox Church of the Holy Trinity on the Bellingshausen Russian Antarctic base.

Chilean, Chinese and Russian research teams in Antartica seek to explore commercial opportunities that will arise once the treaties protecting the continent for scientific purposes expire.” 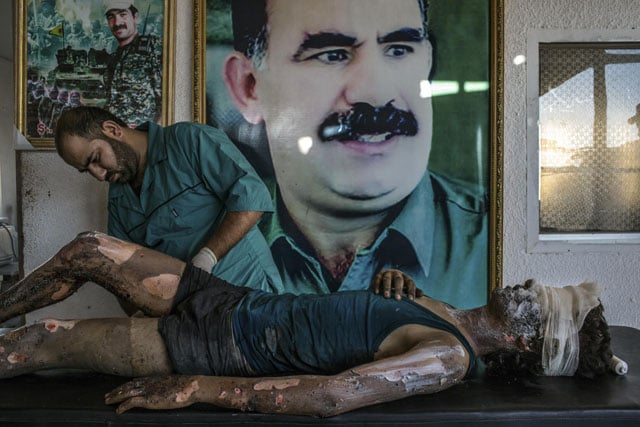 IS Fighter Treated at Kurdish Hospital by Mauricio Lima of Brazil
August 1, 2015
“A doctor rubs ointment on the burns of Jacob, a 16-year-old Islamic State fighter, in front of a poster of Abdullah Ocalan, the jailed leader of the Kurdistan Workers’ Party, at a Y.P.G. hospital compound on the outskirts of Hasaka, Syria.” 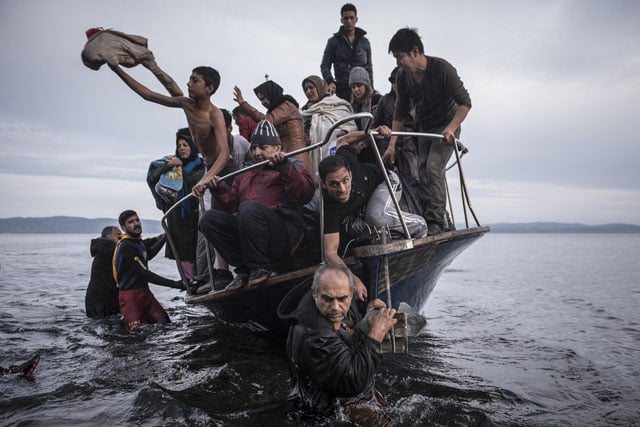 Reporting Europe’s Refugee Crisis by Sergey Ponomarev of Russia
November 16, 2015
“Refugees arrive by boat near the village of Skala on Lesbos, Greece.” 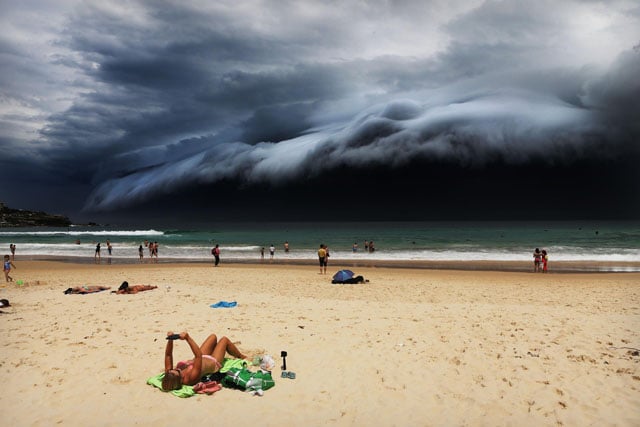 Storm Front on Bondi Beach by Rohan Kelly of Australia
November 6, 2015
“A massive ‘cloud tsunami’ looms over Sydney as a sunbather reads, oblivious to the approaching cloud on Bondi Beach.” 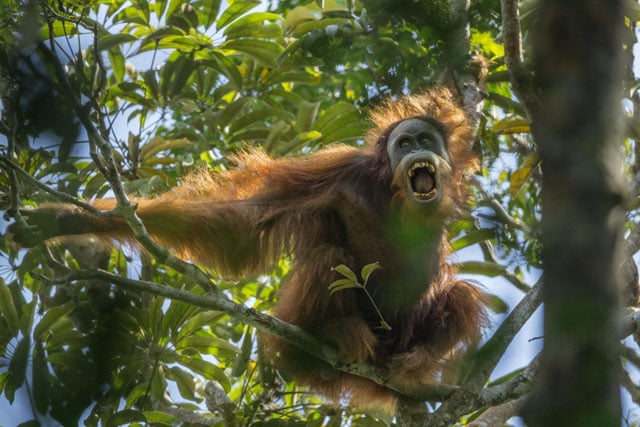 Tough Times for Orangutans by Tim Laman of USA
March 17, 2014
“A Sumatran orangutan threatens another nearby male in the Batang Toru Forest, North Sumatra Province, Indonesia.

The lives of wild orangutans are brought to light. Threats to these orangutans from fires, the illegal animal trade and loss of habitat due to deforestation have resulted in many orphan orangutans ending up at rehabilitation centers.” 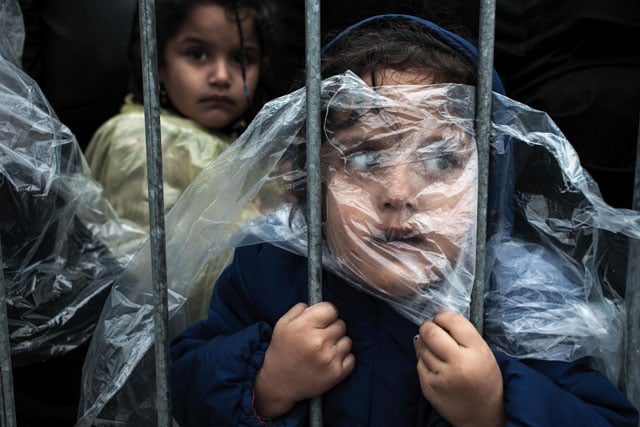 Waiting to Register by Matic Zorman of Slovenia
October 7, 2015
“A child is covered with a raincoat while she waits in line to register at a refugee camp in Preševo, Serbia.” 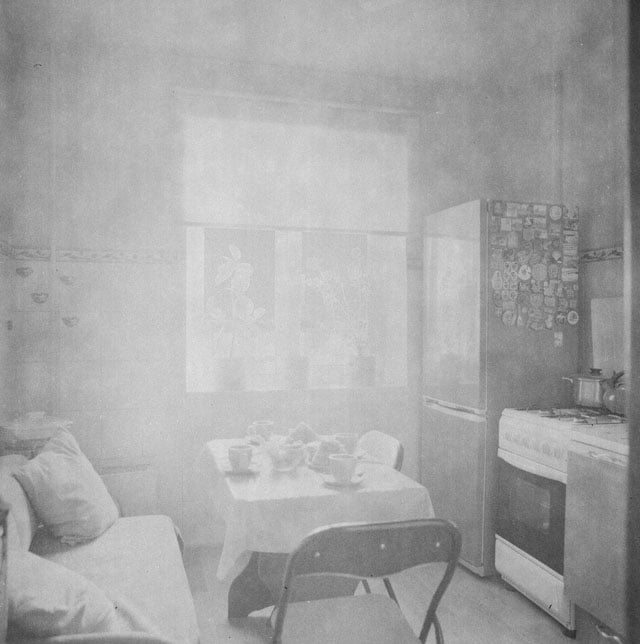 Exposure by Kazuma Obara of Japan
July 12, 2015
“‘My mother said that it was a typically quiet day, warm and windy. She and my father opened the window and they felt completely safe on the day of the explosion, the 26th of April 1986.’

The world’s worst nuclear accident happened on 26 April 1986 at the Chernobyl nuclear power plant. Just 5 months after the disaster, a girl was born in Kiev just 100 km south from Chernobyl. The wind included a great amount of radioactive elements, and the girl became one of the victims of the tragedy. This series of pictures represent the last 30 years of the life of that invisible girl. All pictures taken on old Ukrainian color negative films, which were found in the city of Pripyat, located 5 km from the Chernobyl nuclear power plant.” 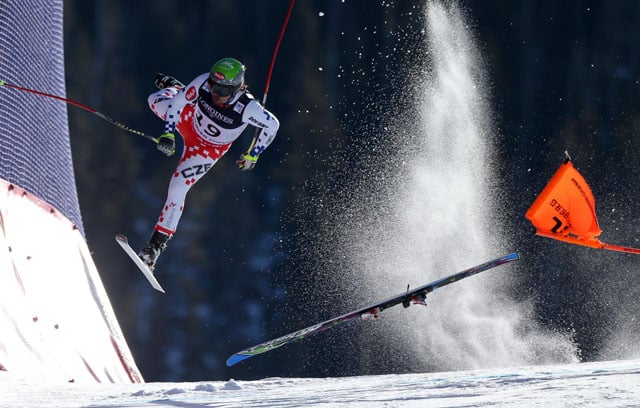 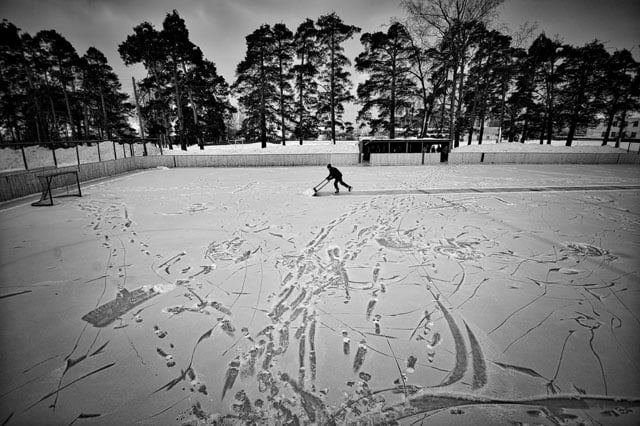 Players of an amateur hockey team in provincial Russia before, during and after a game in the regional championship in Vetluga, Nizhny Novgorod Oblast, Russia.” 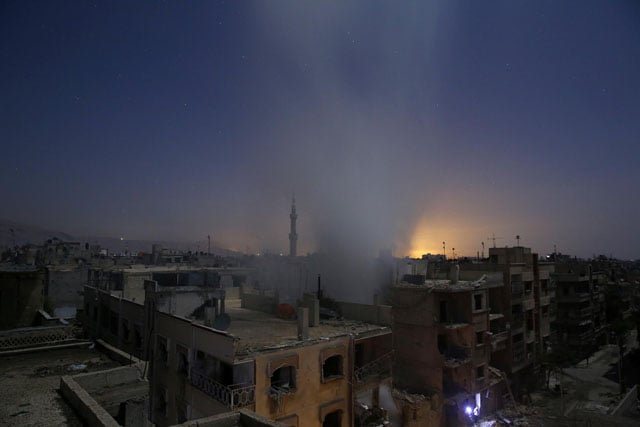 Aftermath of Airstrikes in Syria by Sameer Al-Doumy of Syria
October 30, 2015
“Smoke rises from a building following reported shelling by Syrian government forces in Douma, Syria.

Douma, a rebel-held city in a suburb of the capital Damascus, lies in the opposition bastion area of Eastern Ghouta and has been subject to massive regime aerial bombardment. The area has also been under a crippling government siege for nearly two years as part of a regime attempt to break the rebel’s hold in the region. Douma and small rural towns in the Eastern Ghouta area were recorded as suffering from the highest number of fatalities since the start of the uprising against President Bashar al-Assad in March 2011, according to the Syrian Observatory of Human Rights. Government planes regularly bomb Douma and other small towns in Ghouta, which is an agricultural belt around the capital, leaving a constant trail of destruction and loss of lives.

At the end of September 2015, Russia launched air strikes in support of Syrian President Bashar al-Assad. The thunderous shelling in and around and the city has forced civilians from the town to join the growing number of more than four million Syrians fleeing the country since the Syrian conflict erupted in 2011.” 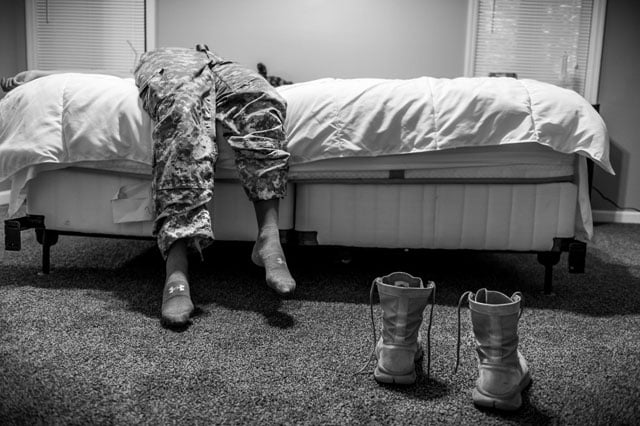 Sexual Assault in America’s Military by Mary F. Calvert of USA
March 21, 2014
“US Army Spc. Natasha Schuette, 21, was pressured not to report being assaulted by her drill sergeant during basic training at Fort Jackson, South Carolina. Though she was hazed by her assailant’s fellow drill instructors, she refused to back down and Staff Sgt. Louis Corral is now serving four years in prison for assaulting her and four other female trainees. The US Army rewarded Natasha for her courage to report her assault and the Sexual Harassment/ Assault Response & Prevention office distributed a training video featuring her story. She is now stationed at Fort Bragg, North Carolina.

Series portraying women who have been raped or sexually assaulted during their service with the US Armed Forces. At the moment, only one out of ten reported sexual violence cases goes to trial and most military rape survivors are forced out of service. Victims suffer from the effects of Military Sexual Trauma, (MST), which include depression, substance abuse, paranoia and feelings of isolation.”

For winning the prestigious Photo of the Year award, one of the top prizes in photojournalism, Richardson will receive €10,000 (~$11,000) and will receive a Canon 1D X Mark II DSLR and lens kit from Canon. The winning photos will also be exhibited in 100 cities in 45 countries over the next year, and will be viewed by an estimated 3.5 million people worldwide.

You can find the entire gallery of winning photos, including 2nd and 3rd prize winners, on the World Press Photo website.