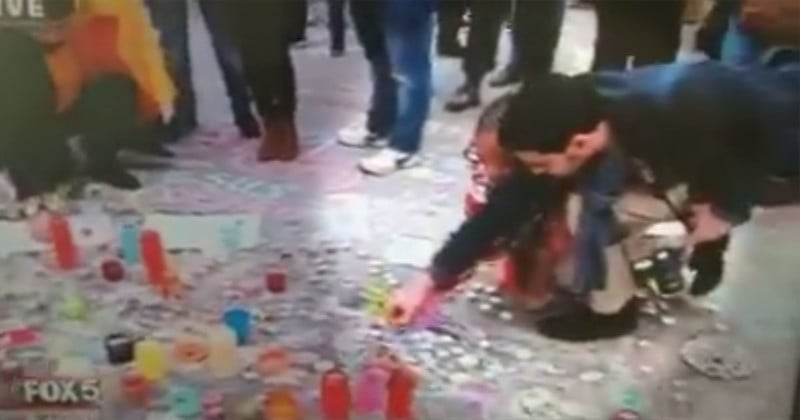 Staging scenes is considered a big no-no in photojournalism, but that’s what one award-winning photojournalist was apparently caught doing at a memorial after the Brussels terrorist attacks.

Photographer James Pomerantz was watching a Fox News broadcast from the Place de la Bourse in Brussels when he noticed something strange going on in the background. Here’s the clip:

“Can’t help but notice the photographer posing the young girl,” Pomerantz writes after sharing the clip on Facebook. “I wonder where the photos will wind up.”

It turns out the photojournalist caught on camera was Khaled Al Sabbah, whose Instagram bio reads: “Photojornalist [sic] around the world. 5 years in Press Photo.”

His photo of the girl was briefly posted to his Instagram account with the caption “Brussels today” before quickly being taken down, presumably in response to numerous photographers speaking out against the apparent staging. 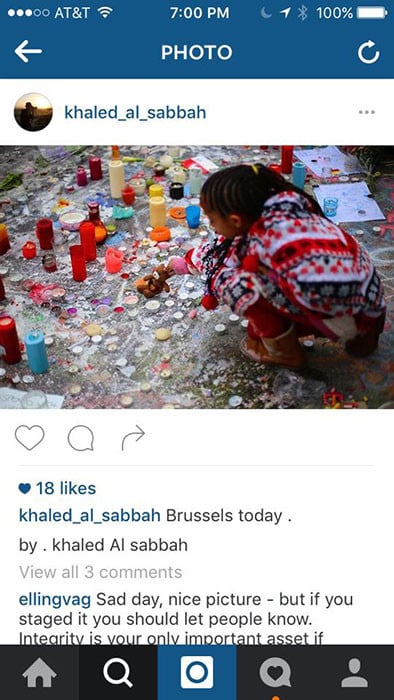 A number of other photos from the scene of the memorial are still up on Al Sabbah’s account: Al Sabbah has won awards for his photojournalism, including a 1st prize award and $15,000 earlier this month in the Hamdan International Photography Award (HIPA) award in Dubai for his photo of a father holding his dead son in Palestine.

During my honoring Ceremony in the largest global concert "Hepa Award" I've got the (1) level as the best photogrepher in the field of photography . The photo of mine participated under the tittle "the Father & Son axis" ""My Photo won""" I'm very proud of being a young Palestinian reached and got such great prize. Many thanks to everyone who was once the cause of my success, since I got these numbers of international awards within these .

We’ve reached out to Al Sabbah for comment, but he has not yet returned our request.

Update: Al Sabbah has responded with an update that he has also published to his Instagram account. He has changed his bio to read “photographer” instead of “photojournalist,” and says that this controversial photo was simply a personal work rather than a journalistic one.

Many people have been harassing Al Sabbah on social media today. Pomerantz, the photographer who spotted the original Fox video, left this comment on one of Al Sabbah’s photos:

I posted the video yesterday knowing nothing about @khaled_al_sabbah, why he was staging a photo or what he intended to do with the resulting photographs. I still know next to nothing (not just about this but about most things in life) but I would imagine that if he’s not feeling pretty sh**ty about things at this point, he probably never will. Photojournalist or not, he’s first and foremost a human being who it would seem made a mistake and has received some pretty intense public lashings for it. We could use more integrity in the world, not just in photojournalism. The same could be said for empathy and forgiveness.

A Photograph is an Experience

Words of Wisdom by an Apple Creative Director Turned Photographer