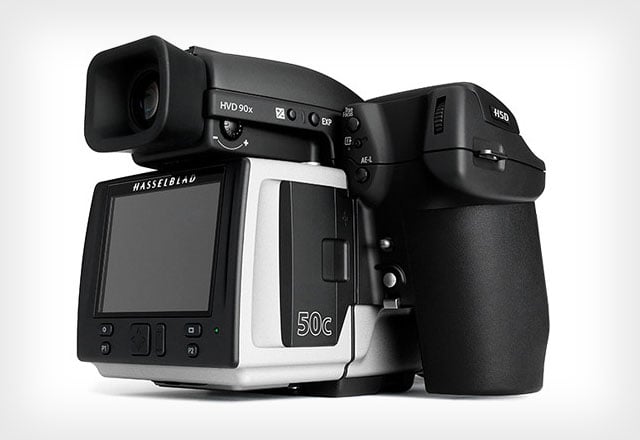 Camera gear retailers almost always have legal disclaimers that protect them from major pricing mistakes — if a $10,000 item is accidentally priced at $10, the order can be cancelled and there’s no obligation to honor the order and take a huge financial hit.

But, as one photographer just found out, pricing errors can sometimes hurt quite a bit. He’s accusing photo megastore B&H of a “bait and switch” move after a $7,100 mistake involving a Hasselblad camera kit. 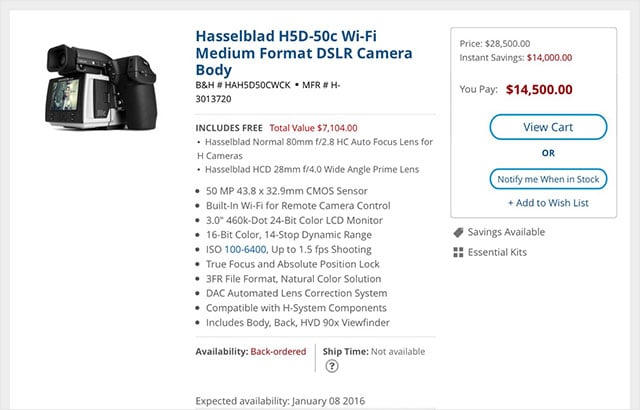 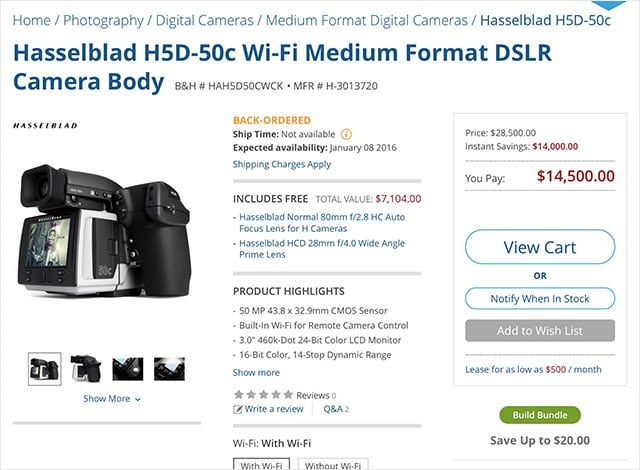 The well-known photographer (who declined to be named) says that he was already planning to purchase the camera as a business expense for 2015, and that he (and other photographers) chose B&H over other major retailers because of this seemingly amazing deal with 2 free lenses.

An email receipt confirmed that charges were made: This morning, however, the photographer received an email from B&H informing him that the lens deal was a mistake, and that the lenses had been removed from the order: 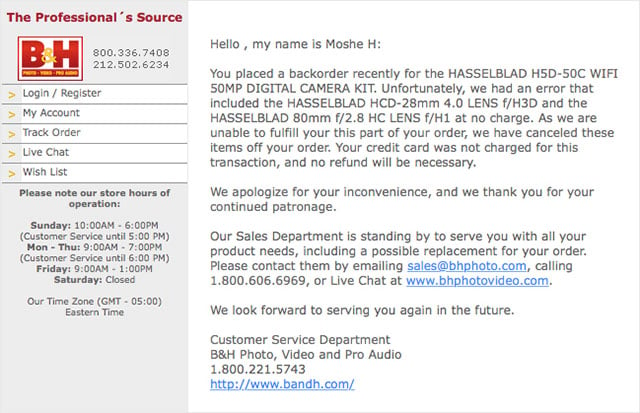 “While I would love to cancel my order and go elsewhere, the purchases need to go on this year’s taxes and that isn’t possible if cancelled (since fund over $10,000 are generally held for 72 hours in the case of a refund),” the photographer tells PetaPixel.

“I guess the craziest thing about all of this is that had they not charged me, I would have just had a cancelled order,” he says. “However, I ended up buying everything and then receiving notice, not that the entire order was cancelled, but that they had taken away items which I had already paid for.”

“So in short, some high end shooters got royally screwed from B&H this morning.”

B&H is apologetic and admits that it made a mistake. “There was no time when we had intended to offer two free lenses with the Hasselblad H5D-50C and are very sorry for this entire situation,” the retailer says.

“This was an error on our website which we regret,” Henry Posner of B&H tells PetaPixel. “Legally, this situation falls under the equitable doctrine of unilateral mistakes“:

When online retailers make honest, good-faith pricing mistakes that result in huge losses to the benefit of … online shoppers, their mistake could be grounds for rescinding the unfavorable contract under the doctrine of unilateral mistake … Rescinding the contract is the only available remedy under unilateral mistake; it is not a basis for reformation … the retailer must cancel the customer’s order and re-offer the product at the actual price.

“We regret that the customer developed the misapprehension this was ‘bait-n-switch,’ something I think is unethcial and something B&H has never, in our 40+ year history, done or would do,” Posner says. B&H has contacted the photographer directly to offer a $1,000 discount on the 2 lenses for transaction, which can still be dated as 2015.

While B&H isn’t revealing how many photographers were affected by this pricing error, the company says it will be contacting each one individually with an offer of compensation.

P.S. A similar situation happened back in May 2015 when Sony temporarily listed the a7R for $200 instead of $1,900 through its online store.