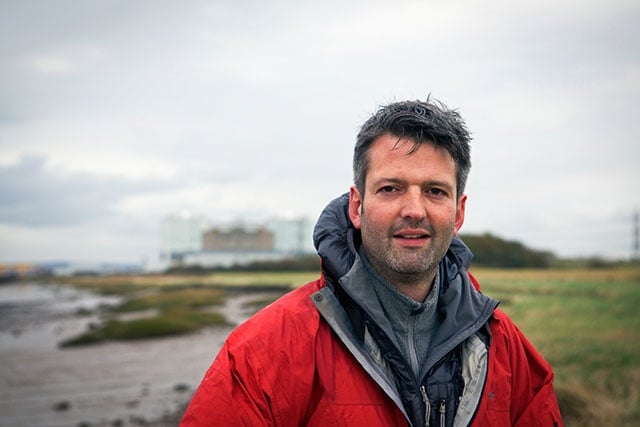 Quintin Lake is a fine art and architectural photographer based in Cheltenham, England. He has been working on an ambitious photo project titled The Perimeter, which involves walking 10,000km (~6214 miles) around the British coast in sections at a time. The journey started back in April, and Lake expects that it will take him 5 years to complete the challenge.

In this interview, we chat with Lake about his life, photography, and current project. 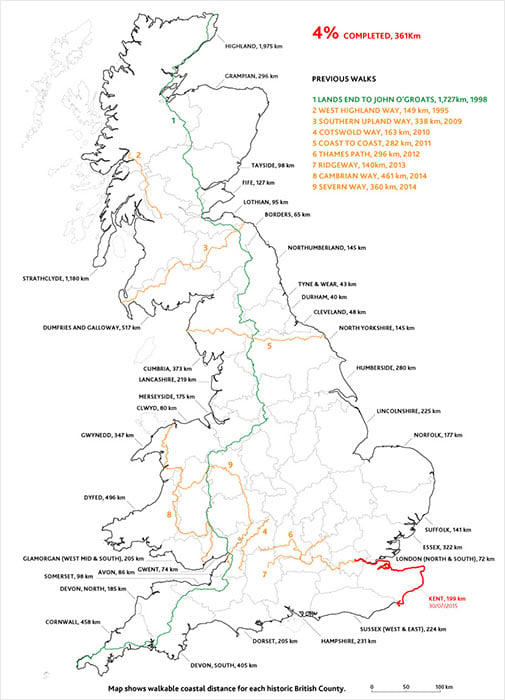 Quintin Lake: I’m an architectural and fine art photographer for the last 15 years, but I started out as an architect – which is why there are lots of straight lines in my photos! I’m married to artist Mila Furstova and live in Cheltenham, England with our two children.

How did you first become interested in photography and long-distance walking?

As an architecture student I used the camera to record ideas that I thought would be interesting as potential designs. I used to sequence images of my own and borrowed to convey the feeling of a space I wanted to design. In time I became more interested in the photographic image as a thing in itself rather than as a record of something.

Whilst initially working as an architect I taught myself large format photography and started picking up commercial architectural photography work shooting 5×4 on a Sinar and 35mm slide – this provided an income to develop travel and walking based creative projects which have become central to what I’m doing now.

I did a lot of hiking with my parents when I was a child and then learnt outdoor skills through the Scouts and later the Territorial Army, Raleigh International & British Exploring Society. Although I enjoy teamwork my favourite outdoor pursuit was backpacking alone in national parks so I started seeking out routes so I could stay in these environments for longer.

I did some charity work in Uganda and needed to raise £3,000 which is how the three month Lands End to John o’ Groats walk came about. For the first few weeks each day hurt more than the last – they I became used to it and more skilled in making do with carrying very little and found I was happier than I’d ever been walking and sleeping in these wild places for day after day.

I guess it was inevitable that my two passions of walking and photography would unite. The first walking based body of work I’m really proud of is Sweet Thames, Run Softly in 2012. This was a 274km walk from the source of thames as a spring in Kemble to the Houses of Parliament in London. The Thames is not a dramatic river and its charms are subtle so I tried to convey this with very abstract images of the mighty rivers growth.

Photographers start ambitious projects all the time, but oftentimes they aren’t able to complete what they started. What makes you confident that you’ll actually finish walking the 10,000km? Why should people pay attention to your project?

To get to this point has been the result of a twenty year journey. In 1998 I walked 1,727Km between the two further points of Britain: Lands End to John O Groat’s over three months. Since then I’ve successfully completed 8 other long distance photo walks in the UK. In my career as a photographer I’ve travelled to over 70 countries including Greenland (Travel photographer of the year, Portfolio Winner 2010) and Chernobyl, Ukraine (1st Place: 2012 International Photography Awards, Architecture Category) but the experiences that burnt strongest in my mind where these long walks in my homeland.

I’d always found landscape in Britain impossible to photograph for a long time – it’s so incredibly easy to fall into cliché – especially when the coast is concerned. A few years ago I started seeing the strange things that I’d missed before as a result of traveling abroad and seeing the familiar in a fresh light.

I don’t know if I’ll be able to finish this project, it’s 6 times longer than I’ve ever walked before, but I’m just focusing on the next step, the next headland. If I knew I could complete it or I knew exactly what the artistic outcome would be it wouldn’t be worth doing.

Also, for me, this isn’t a physical show-off kind of journey – it’s been done before by a number of people, it’s about trying to show something new from this environment that I find so inspiring through photography. A kind of road movie of continuous narrative in still photography but on foot rather than by car.

On one day in Kent, I passed two nuclear power stations then a live firing range, with red flags flying and automatic gunfire sounding – then later I’m walking on a sandy beach with surfers and families licking ice creams – how can those contrasts not be inspiring for a photographer!

I see the parallel challenge as being a creative one – how to make sense of such a large and diverse amount of material into a coherent body of work. Especially as over the five year duration of this project I expect (and hope) that I will see things differently than I do now – so in that sense it’s a kind of pilgrimage as I need to have faith that things will work out ok. What I am confident of however is the enduring inspiration that I pull from this landscape – that is what has kept me going when my feet hurt and my clothes are soaked through by rain on my previous journeys.

Much photography considered fine art in the UK is some kind of staged or self conscious theatrical setup – I’m distrustful of this notion as I believe the profound and the intriguing can be found in the real world as we find it. Jay Maisel has said he photographs things he hasn’t seen before and I share his outlook completely – the edge of Britain is especially dense in things I haven’t seen before.

What camera equipment do you use?

A Canon EOS 6D with three lenses: 24-70mm f4L, 70-300mm f4-5.6L, and 17mm TS-E f4L tilt-shift. I use a very small knee-high table tripod Gitzo GT-531 (to reduce weight) for dawn, dusk and interiors that I use by sitting on the ground as it’s only about 50cm high. I carry everything in a Mindshift Horizon backpack that has a wonderful rotating beltback although it’s a bit heavy. I also use a Peak Design Capture Clip attached to the shoulder strap as I like the camera to hand at all times. When I’m carrying camping equipment and multiple days food I use a larger backpack and leave the 17mm at home.

How long do each of your walking trips take, from leaving home to returning again?

Between one and two weeks. Occasionally less if there are good transport links. I’ll anticipate taking month long stretches in the highlands of Scotland as the area is so remote and time consuming to travel to.

How many photographs do you usually take during walks?

Around 400 frames most days – which I edit down to 10-30 keepers in the first round which I put online. Finally I choose 16 per county (around two weeks walking on average) that I consider the very best work for print sales. It normally takes a day of editing to work on a day of walking.

How do you go about shooting original photos of coastlines and sights that have been photographed by countless photographers before you?

I’m particularly interested in coastal infrastructure and industry so that narrows the field a bit. I get very excited by cement depots, supermarket distribution centres, container ports, power stations and things like that as these are the symbols and structures of our age. I think you create your own luck when walking – If you are out for ten or twelve hours moving all the time inevitably you witness something unusual, you just have to be ready when it happens. For me this means traveling alone so I can be looking and paying attention all day.

I research the route ahead of me by reading books on the area, studying maps and following the route on google satellite to gets a feel of what is ahead. This means if I feel an area is of special interest I can make sure I’m camping nearby so I get morning and evening light on the subject.

There are some honeypot locations that are pretty much impossible to shoot in a new way unless there is some unusual climatic or social event going on there. As I have to keep going through some dreadful weather this can lead to some very dramatic light effects as weather fronts pass that a car based photographer would likely avoid. After three days of continuous rain it can be pretty hard to convince myself of this theory though!

What are your eventual plans for this project? Are exhibitions and photo books on the horizon?

If all goes well as I’ll have invested so much time in the project I’d love to to do a book and exhibition. However I want to get something like a quarter of the way around first – so I have a clear idea of the creative direction, that my body can handle it and if people are interested in the project or not.

Who are some of your favorite photographers?

Most of the Dusseldorf school. Particularly Andreas Gursky both for the beautiful aesthetic and multivalent modernity of the subject matter. Nadav Kanders series such as his work on the Yangtze and the fact he combines art and commercial photography careers successfully.

Hiroshi Sugmoto seascapes are sublime. Simon Norfolk does some really interesting work too, I also draw lot of inspiration from the other arts such as film maker Patrick Keiller and artists Richard Wentworth, Richard Long and Hamish Fulton. 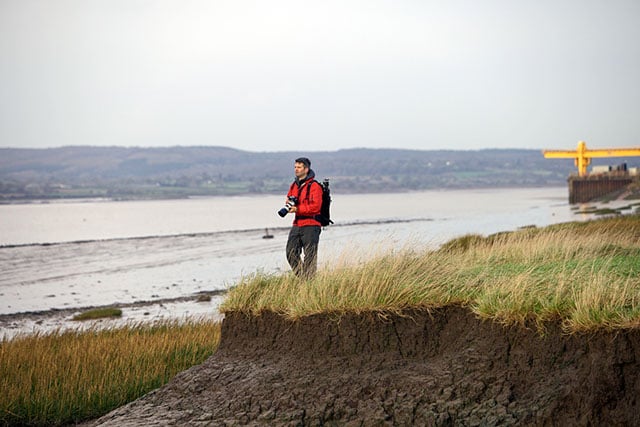 What Phone Cameras and Social Media Have Done to Special Moments