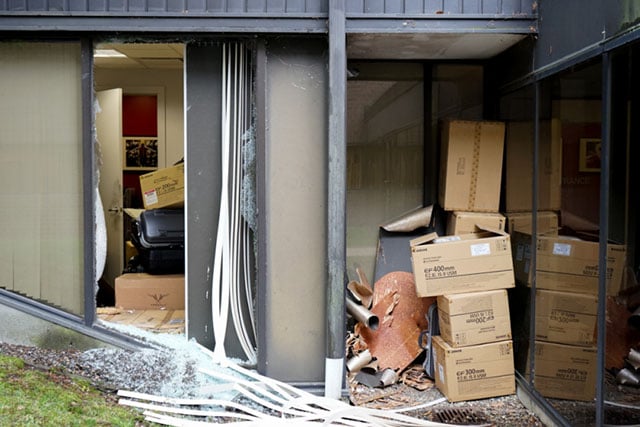 Camera gear rental company LensProToGo just had its headquarters broken into, and as much as $500,000 in equipment may have been stolen by burglars.

According to a Facebook post published earlier today, employees arrived at the headquarters in Concord, Massachusetts, this morning to find a window of the office smashed and turned into a gaping hole. “An unknown amount of gear mostly Nikon, Canon and Sony equipment was taken out through the new ‘hole in the wall’ and smashed window,” the company says in a press release. The initial Facebook post estimated that the loss was about $500,000, but the text has since been updated to leave out a figure.

“Though this may seem like a large hit to our still growing company, we are in tremendous spirits as a very large amount of our total inventory was out of the building on rentals,” the company writes. “We hope they at least got to wear cool Mission Impossible outfits, but we sadly aren’t sure of that detail.” LensProToGo says it’s currently working with their city police and the state’s crime scene investigation team to figure out what happened and bring those responsible to justice. A list of gear and serial numbers will be published soon so that photographers can help raise the alarm if any of the missing items shows up for sale somewhere.

(via LensProToGo via Resource Magazine)

Update on 6/16/15: LensProToGo tells us that a camera store just a few miles away was also broken into around the same time, suggesting that the burglars specifically targeted photography-related offices for the high-priced equipment inside.

LensProToGo also finished assessing what was stolen. The final figure for the value of lost gear was found to be $586,000, a good deal more than the original $500K estimate. You can find the list of stolen gear and the serial numbers here.