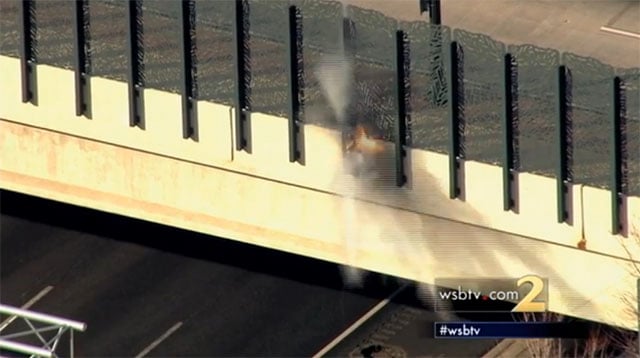 If you’re looking to do a solargraphy project by leaving a pinhole camera in a place for months, a bridge above a busy freeway is not a smart location choice.

Someone doing this caused a bomb scare in Virginia back in 2013, and it looks like the exact same thing caused a ridiculously huge commotion in Atlanta, Georgia this morning. A busy freeway was shut down in both directions, and a bomb squad was called out to detonate the device. Local news station WSB-TV reports that the ‘tube shaped object” was duct taped to the side of the bridge overlooking the interstate. A worker who spotted the device said there was a note on it that said something like: “Slow motion video. Do not move until spring.”

Someone else who walked past the device reports that it was simply a coke can that had been converted into a long exposure camera. The attached note said that it was for an art project — presumably a solargraph.

Unfortunately, law enforcement won’t take the chance with a suspicious device report. The interstate was completely shut down for hours, the resulting traffic jam stretched for miles.

Police, firefighters, and a bomb squad were quickly called to the scene.

Here’s a short news clip showing the camera getting blown to bits:

It’s crazy how much commotion a single misplaced pinhole camera can cause.

Update on 2/3/15: The Atlanta Business Chronicle has some more details on how the camera was reported to police in the first place:

The caller, who is a photographer, told the station that when he later saw news video of the device, he realized it might have been a pin-hole camera in a Pepsi can. He said a student may have installed the camera for an art project. The man […] said that while he regrets the disruption to traffic, he knows he did the right thing.

Update on 2/3/15: Georgia State University is now saying that the camera was one of 18 cameras placed around the city by students in an art project. The university is apologizing for the inconvenience it caused, and all those cameras are now being removed by authorities.

kraftwerk: A Portable Power Plant That Can Charge Your Camera with Standard Gas

BTS: Shooting Portraits of Celebrities at Sundance in a Tiny Tent Studio