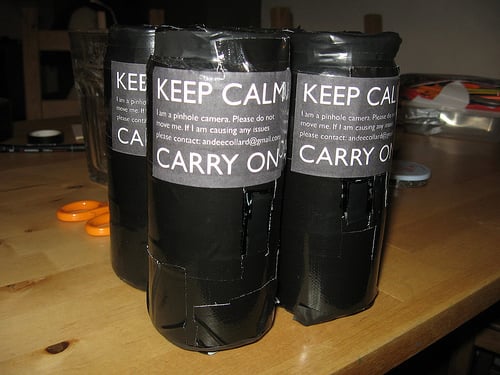 If you’re planning to try your hand at solargraphy, it might be a good idea to label the pinhole camera before placing it out in public — when one was spotted at Central Washington University, it was reported as a bomb and caused part of the campus to be shut down for four hours!

[…] a groundskeeper found a cylinder with duct tape on it. Officers closed a street while an Army explosive ordnance disposal team from the Yakima Training Center traveled to Ellensburg to check it out the unidentified object.

The chief says it contained what appeared to be film and could have been a camera made for some project. [#]

Since solargraph cameras are sometimes exposed for up to half a year, there’s probably a solargraph photographer somewhere out there crying right now.

Suspicious device at CWU was homemade camera [The Seattle Times]