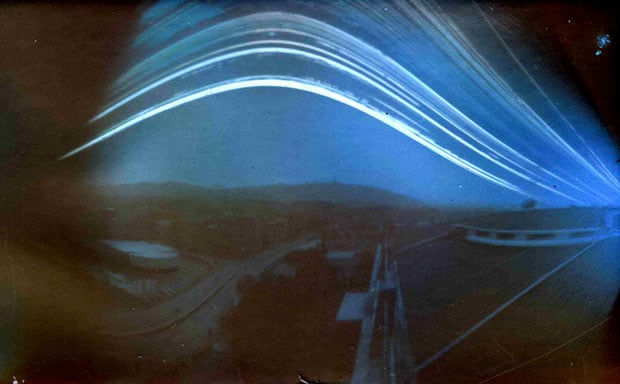 Solargraphy is a technique in which a fixed pinhole camera is used to expose photographic paper for an absurdly long amount of time (sometimes half a year). Practitioner Ollipekka Kangas says,

Basically solarigraphic camera is a pinhole camera, very slow one. These pinhole photographs taken with a lensless pinhole camera with a extra long exposure. I use black&white paper which is 5-10 ASA. Exposure time can be very long, in some photos up to six months. Usually average camera is hidden in city for one to two months. The picture will appear without developing photographic paper with any kind of chemicals. Exposured paper is scanned in darkness and developed in Photoshop. All the cameras are very low tech, cheap boxes, canisters or film cans. This method in is antidope for digital photographic madness. I can take only like 5 pictures in month.

Sun draws many interesting traces in photos, you can really see the time passing by. Some times camera is tilted by passerby or tape just goes loose. Double exposures or traces of humidity can be seen in photos.

Here are the basic steps for doing this yourself:

Be sure to secure your pinhole camera firmly to something that doesn’t move: 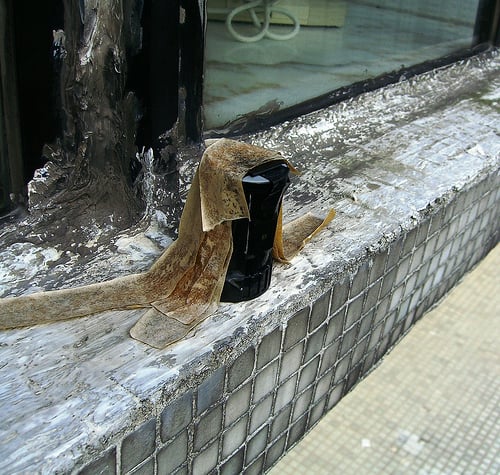 What’s cool is that, with a long enough exposure, you can see the different paths the sun takes across the sky as months pass by. Here’s a solargraph that was exposed for more than five months from July 15, 2009 to December 21, 2009: 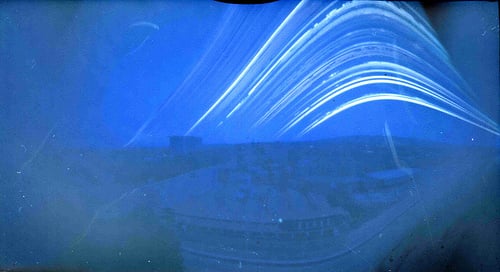 If you have some photo paper lying around, why not give solargraphy a shot? Just be sure to come back half a year later and link us to your results!

Image credits: programmazione by …cave, CIMG6776 by gumpz, and [Untitled] by …cave