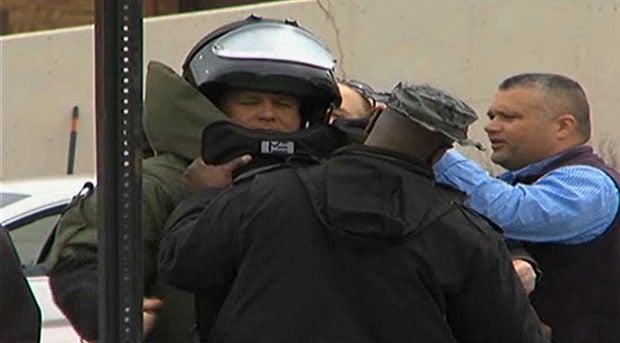 Solargraphy involves using a pinhole camera to shoot extremely long exposures of scenes. Photographers who engage in it often leave their cameras fixed to outdoor locations for months or years in order to capture the path of the sun across the sky.

Waiting until the whole exposure is complete before seeing if an image turned out is painful enough, but there’s another major difficulty that can cause practitioners pain: the cameras are sometimes mistaken for bombs.


That’s what happened last Thursday over in Virginia. The Roanoke Police department received a report of a suspicious device strapped to one of the metal support beams of the Martin Luther King Jr. Memorial Bridge with zip ties.

By sheer coincidence, there was a memorial and prayer service for Martin Luther King scheduled to be held nearby later in the day, so the police didn’t want to take any chances. Thus, they treated the device as an extremely dangerous bomb. A bomb squad arrived on location early in the day and sent in a robot and a heavily armored expert to investigate. The police shut down traffic across the bridge to keep citizens from getting too close. They also visited nearby schools and advised everyone to stay inside the buildings.

After investigating the device up close, the bomb expert clipped the ties that held the can to the bridge, causing it to fall onto railroad tracks below. The whole team then moved onto the railroad tracks to “defuse” the can.

Only much later in the day did investigators announce that the device was simply a homemade pinhole camera that some photographer was using for a long-term solargraphy project.

Authorities are now looking into pressing charges against the photographer due to the fact that their bomb defusing caused major disruptions to traffic.

This story reminds us of a similar case back in 2011 in which a university was locked down for hours while a bomb disposal team investigated a solargraphy camera.

If you’re planning on investing months or years toward creating a solargraph, here’s a pro tip that could save you a lot of trouble: make sure your harmless pinhole camera is clearly labeled as such! (It’d probably be a good idea to include your contact information on it as well.)