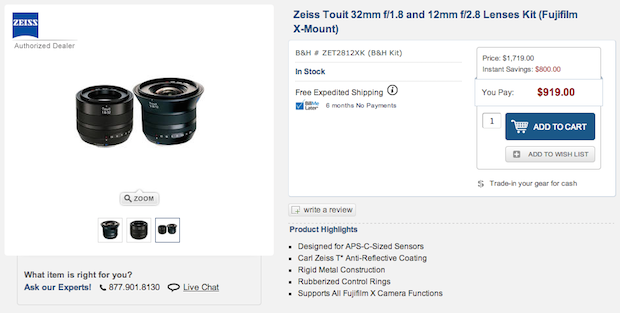 If you’re in the market for some new gear, be it bodies or glass, this weekend and the coming week hold some enticing deals. Both Sony and Zeiss are getting in on the action, so take a look below and see if either are up your alley.

If you’re in the market for a Sony A6000 and some accompanying glass, Amazon has a deal that you’re not going to want to pass up. You can get up to $400 off the A6000 when combined with the 55-210mm and 50mm f/1.8 prime lens at Amazon. Add all three of those to your cart, use the discount code “NGWGUS3ZKG“ and you’ll be on your way towards saving a pretty penny on your new setup.

Another interesting tidbit is based around the latest deal from Zeiss. We recently told you about the Zeiss deal that took $800 off the Touit Lens Kit. And while Adorama has sold out, it looks like B&H still has a few in stock. According to SAR, this sale was so popular that ZEISS were a bit shocked with the numbers and are stopping the offer this coming weekend because they’ve almost emptied out their entire stock of Touit glass in the US… so don’t wait if you’d like to take advantage.

If either of these deals interests you, you’re definitely going to want to hop on them as time and supply are running out. It’s not often you’ll find $400 off a Sony A6000 setup and even less often to get what is essentially a buy-one-get-one free sale from Zeiss. So head on over to the respective stores using the links above and save yourself a few bucks.

How to Take Full Advantage of Lightroom’s Develop Module, a Thorough Walkthrough