As a photojournalist, there are many moments where you have to answer a simple ethical question: do you take the photo, or do you try to help? This happens a lot in more tragic events, and conflict photographers are often accused of making the wrong choice.

Which is the right and wrong choice is up for debate in any given situation — a photo might spark change on an international level after all — but one thing is for sure: we don’t often hear about photojournalists putting down the camera and choosing to help right then and there. That, however, is exactly what happened in the case of Miami Herald photojournalist Al Diaz in February of this year.

While stuck on Florida State Road 836, Diaz saw a woman outside of her SUV screaming for help — her baby nephew had stopped breathing. Putting his profession as a photojournalist aside, Diaz ran to the woman’s aid, made sure that the situation was under control and ensured trained emergency personnel were on their way before ever laying hands on his gear. For his actions, he’s been given the NPPA’s Humanitarian Award.

Heading through traffic to find a police officer, Diaz was able to get aid to the five month old who, it was later discovered, had stopped breathing because of a tracheal cysts. The aunt of the baby and the police officers kept the baby’s breathing going long enough for emergency services to arrive. 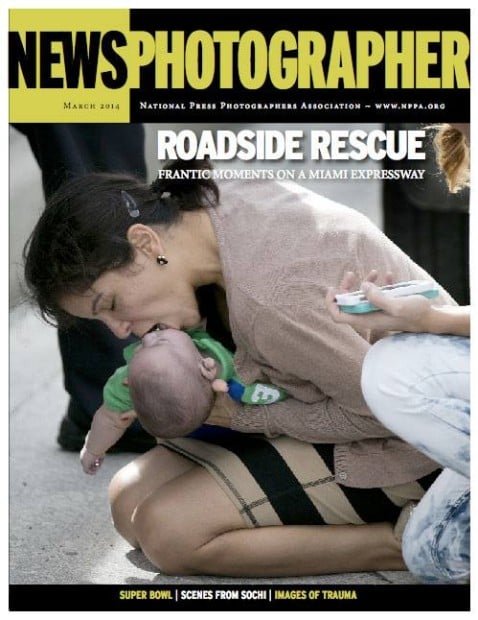 Only after Diaz was sure he had gotten proper help for the baby and family did he kick back into professional mode, capturing powerful photographs of the events that transpired. These quickly went viral. NPPA president Mark Dolan had this to say about the events and why Diaz was given the humanitarian award:

I think Al’s actions exemplify the ethical and humanitarian stand that NPPA has taken over the years. It’s important for all photojournalists to remember that you don’t have to lay down your humanity when you pick up a camera. Al did just that, he put the welfare of the child first and made sure he did all that he could do, and it wasn’t until he realized that things were well in other people’s sure hands that he took up his camera and began making images. And they were incredible images at that.

The actions Diaz took in this trying situation go to show just how important it is to take a healthy dose of humanity before picking up the camera.

After watching the interview from Think Tank Photo with Diaz above, let us know your thoughts on the situation and how Diaz handled it. And if you’d like to read his own account of the events, head over to his website by clicking here.

Intimate Black and White Portraits of Exotic Animals in Captivity