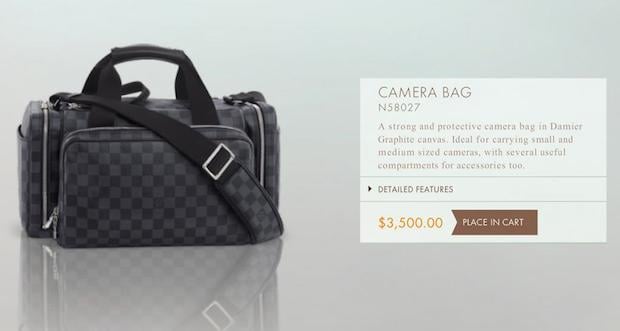 Don’t you just hate it when you spend several thousand dollars on a dressed up Sony RX100 (Mark I) or NEX-7 with a Hasselblad logo on it, only to find yourself carrying it around in the same cheap camera bag as that guy down the street who bought the Sony version?

Well fear not, dear citizen of the luxury world, because Louis Vuitton is here to help! Introducing: the $3,500 Louis V camera bag for small and medium-sized cameras.

This bag — which, mind you, is lauded as ‘strong and protective’ and features ‘several useful compartments for accessories too’ — is being reported by some as the most expensive camera bag in the world. We’re not certain that’s true, but at $3,500 we wouldn’t be surprised.

According to DealsRunner, this is the first time this bag is in stock, and given the tempting price tag, you might want to jump at the opportunity to snap one up before they’re all gone.

To learn more about the bag, purchase one up for yourself and try to resist the temptation to buy the matching $470 wallet and equally expensive belt, head over to the Louis Vuitton website by clicking here.