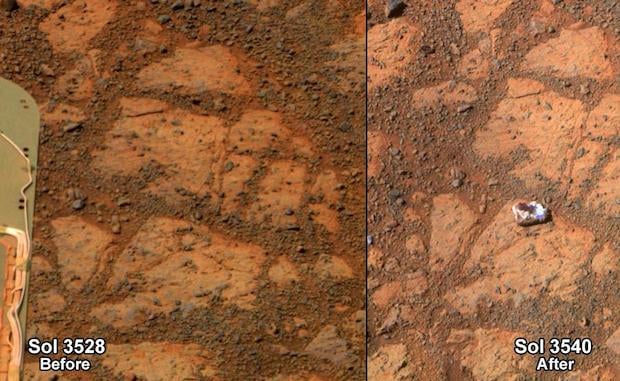 The Mars Opportunity Rover has found a jelly donut on Mars… man would that be an awesome headline. Unfortunately we couldn’t run that unless we were intent on click baiting you (we’re not…). What the 10-year-veteran Mars Rover did find (and photograph) is a mysterious rock that looks like — and has been nicknamed — the ‘jelly donut.’

Why mysterious? Because it seemed to appear out of nowhere in pictures of the exact same spot on the Martian ground only 12 Martian days (or Sols) apart.

The explanation as to how the rock got there is sufficiently scientifically boring. Much as we might have hoped for the discovery of careless Martian bakers, chances are the rover kicked up the rock during a short drive that happened in those intervening 12 days.

Here’s a closer crop (click on the image for full res): 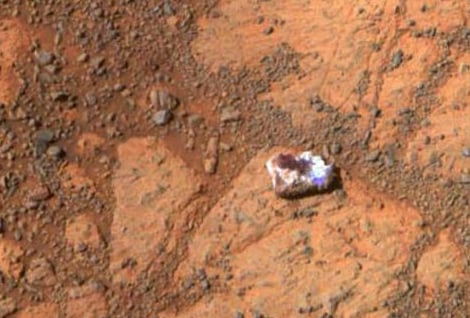 Still, the powder-white rock with its dark red center — which has, by the way, officially been named Pinnacle Island (we WAY prefer Jelly Doughnut, but NASA didn’t seek our input) — has given laypeople such as ourselves a good chuckle while offering the folks at NASA “an unusual circumstance for examining the underside of a Martian rock.”

And, interestingly, the rock really has proven itself to be more than just eye candy (or, rather, eye pastry). According to APOD, it contains twice the manganese of any rock we’ve yet examined on Mars, a discovery that “doesn’t yet fit into humanity’s understanding of the Martian geologic history.”

PS: Opportunity recently celebrated the completion of a full operational decade on the red planet. Check out the selfie it sent home in honor of that occasion.