Five years and 74 truly stunning (not the click-bait type) photographs later, photographer Kirsty Mitchell and the heroine of her story, Katie, are both bidding a fond farewell to Wonderland and everything it has meant to them over the past half-decade.

And while this isn’t the final photograph in the series (two smaller pieces will close out the 5-year labor of love and unmatched artistry) Mitchell describes this photo, dubbed ‘The Fade of Fallen Memories…’, as “the mountaintop I have spent 5 years clawing my way towards.”

It’s appropriate that Katie, the heroine of Mitchell’s Wonderland series through whom the talented photographer has bared so much of her soul over the years, would be the one to close out the adventure. And, as usual, Mitchell’s description far surpasses our ability to paraphrase it.

Here is how she describes the scene in her behind-the-scenes blog post/diary entry about this particular photograph:

“The Fade Of Fallen Memories” is a goodbye, both in the Wonderland story but also within the real world, in my own life. Their parallels intertwined in such a way that it gives me chills, it brings me both happiness and sadness all at once, but above all this photograph is about release…

In Katie’s world, it is the end of her time in Wonderland, the door being the final piece of the puzzle that fits the queen’s key she has carried close to her heart throughout her journey. In my world, it is the metaphor for letting go of the years of grief I have carried with me and taking that final step back towards reality. 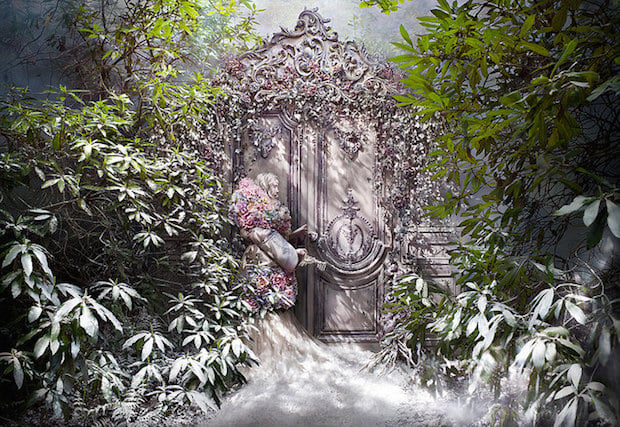 The challenges faced in creating this image were huge, perhaps the most daunting Mitchell has yet faced. The door Katie is stepping towards had to be worthy of both Wonderland and Mitchell’s goodbye to it, and Mitchell and her team had to somehow photograph winter and spring in one photo.

The amount of intricate detail captured in this single frame truly boggles the mind, and feels like a fitting crescendo that Mitchell has been working towards for five years. In the video below she gives you a glimpse at the work that went into creating the door that was as important to the scene as Katie herself:

On her blog, Mitchell goes into an immense amount of detail regarding the creation of this piece and, far more importantly, everything that it meant to her.

But if you don’t have the time to read that right now, just watch the behind the scenes video at the top, and pay special attention to the moment about three minutes and thirty-five seconds in when Mitchell hands Katie the key.

“For that brief moment we were connected through our grasp of the key, it was like I was finally meeting her, and letting her go in real life all at once,” writes Mitchell, describing the moment she watched again and again when she saw the video for the first time.

“The key would unlock her next step in life, set her free, just as creating this series has saved me from grief… and now all that was left, was for us to both face our doors and move forward one, last, time…”

Video: A Must-Watch Commencement Speech for Creatives at Every Stage in Their Journey

The 10 Most Watched Videos Posted by the Art of Photography