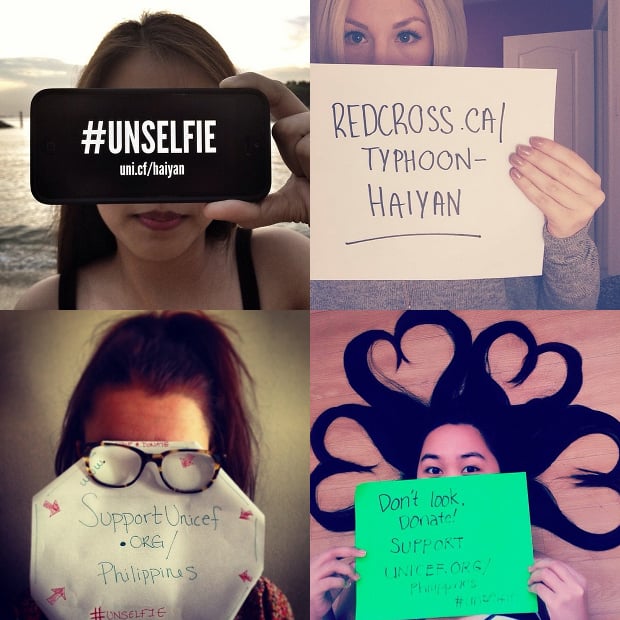 Instagram may be home to a wealth of aesthetic and legal offenses, but it can also be a tool for promoting our better instincts, as a recent movement involving relief for victims of typhoon Haiyan attests to.

The movement is based on a new meme dubbed the “unselfie.” The idea is that instead of taking yet another picture of yourself, you obscure most or all of your face with something that displays the URL for the main UNICEF or Red Cross site to send aid to typhoon victims in the Philippines.

In short: Forget the usual narcissism for a minute and help out.

The trend began in the Philippines but has quickly spread beyond, with over 1,600 images (almost all of them clear on the concept!) turning up when you do a search for the unselfie hashtag on Webstagram, and that’s not taking into account the thousands more who have joined the movement on Twitter.

Nicholas Bordas, a European ad exec who helped popularize the unselfie trend via his freakishly large LinkedIn network, noted that social media has become a major information outlet for typhoon survivors to connect with the rest of the world. And it’s bad karma to eat up bandwidth with stuff that won’t help them.

Of course, the unselfie movement is about spreading the word about where one might donate, not necessarily donating yourself (a great way for those with limited resources to help out). If, however, you’re able to do more and would like to donate money to the relief effort, the primary two avenues available are The Red Cross and UNICEF. Just follow the corresponding links.

(via Mashable via Imaging Resource)

Yet Another Reminder to Keep Your Poor Camera Sensor Away from Lasers!