Kirk Crippens was inspired to take photographs by his grandfather. In 2010 he was Top 50 Photographer in Critical Mass and nominated for the Eureka Fellowship. In 2011 he was Top 50 photographer for the second consecutive year and participated in eighteen exhibitions. In 2012 he was AIR at RayKo. In 2013 he was AIR at Newspace in Portland, Oregon. He is in the MFA, Houston collection and was recently curated into an exhibition at the National Portrait Gallery, London.

PetaPixel: To begin, can you tell us about how you first got started in photography, and who your biggest influences are?

Kirk Crippins: I can’t remember a time I wasn’t interested in making photographs. My grandfather kept a darkroom in his closet after his days as a military photographer. My father always loved photography. Both of these men inspired me at a young age. The first big thing I save up to purchase with my summer job was a camera. My influences have changed through the years, but Edward Burtynsky, Hiroshi Sugimoto, Jim Goldberg and Andreas Gursky never cease to inspire and push me. 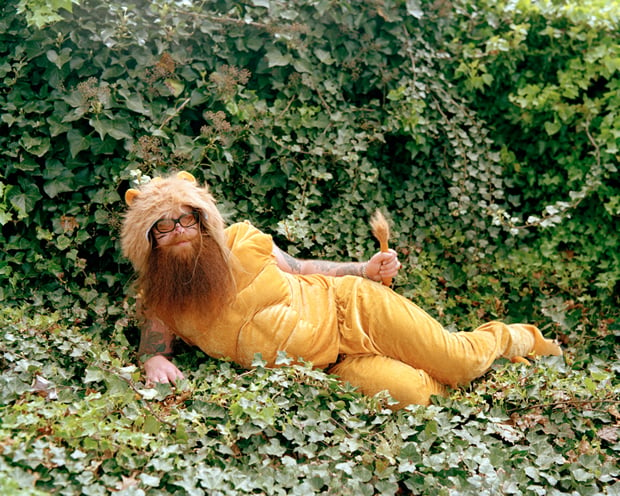 PP: You’ve done a lot of work with portraiture.  What makes this style so interesting for you?

KC: For quite a few years I didn’t include people in my work. Many photographers, including myself, love to work on projects photographing place and object. Be it a landscape, a foreclosed home, an artifact or architecture, we like the solitude of working alone with the camera. What could be better? Quietly moving around a space or object, doing what you want, when and how you want to do it-without the influence or tension another person can add. Portraiture is the opposite of that quiet solitude. Place another person in the mix and the whole process is completely different. That challenge was the beginning of my interest in portraiture. Today, all of my current projects contain portraits, except one. PP: Please describe the steps of your process in creating these photographs, from initial planning to final execution.

KC: I was offered an artist residency at Newspace Center for Photography in Portland, Oregon in May 2012. From that time until I traveled to Portland in April 2013 I planned out the project that became Portraitlandia.

I began by thinking about the dilemma a month-long residency poses: how can you create something with authenticity in a month? How can you connect with a new city and reflect anything substantial in four short weeks? As I considered I created a Google Alert for Portland and other for Oregon. Each day I would receive an email with the latest news stories containing those words. After a while of this type of research I came to the conclusion that portraiture of iconic Portlanders would meet the criteria. Thinking that the people of Portland would bring the authenticity and connection I wanted I began researching and putting together a list of interesting and iconic Portlanders. Though some of the portraits are of well-known folks, I decided to also include subjects that were iconic in a different way: people who could represent a slice of Portland through their attire, uniform, or the way they present themselves: a nun, a mail carrier, a mechanic, a person with a long beard, a person from the body-modification community, etc. By the time I arrived in Portland I had the majority of my portrait sessions, over 40 in all, scheduled. PP: Did you have any difficulty finding subjects for Portraitlandia? Was everyone receptive to your ideas, or were there some people who took a little convincing?

KC: I did not have difficulty finding interesting subjects in Portland, the city is full of wonderful people and most were willing to pose for me. John McAfee took a little convincing, but once he was on board he was a fantastic portrait subject.

PP:  Working with such a unique and diverse group of characters must have produced some interesting interactions.  Do you have a favorite story to tell about shooting this project?

KC: My month in Portland was one of the most creative and exhausting months of my career. If I hadn’t laid out my itinerary before arriving, I wouldn’t have been able to accomplish the project I set out to do. Everything was compacted into such a short time, shooting was done during the day and scanning the film was done each night. I would work from 8 AM until 10 PM each day. In some ways the time is a blur, but when I look at the portraits I remember everything about my time with the person.

One of my Portland adventures took me to Camp Howard, a 240 acre Catholic camp for children at the foot of Mt. Hood. Sister Krista von Borstel agreed to have her portrait made, but she wanted to take me to the camp she runs. With most of my subjects I asked for 2 hours of their time because the 4×5 view camera process I was using can be slow. Sister Krista turned around and asked me of 4-6 hours! The morning of our appointment she drove me out to the camp and introduced me to her staff. Then she spent an hour giving me a tour of the grounds, which were beautiful and immaculately kept. She also introduced me to her blood sister, Karen von Borstel, who is in charge of the grounds and day-to-day logistics of Camp Howard. During my tour I asked if Sister Krista if Karen might allow me to photograph her as well. After the tour I spent an hour or more wandering the grounds looking for three locations, one to photograph Sister Krista, one to photograph Karen, and a third to make a photograph of the two of them together. The last photograph I made was of the two sisters on the porch of one of Camp Howard’s cabins. There’s something special about the two of them standing on that porch, the strength they convey, and the symmetry of their bodies. The day culminated in that last frame. 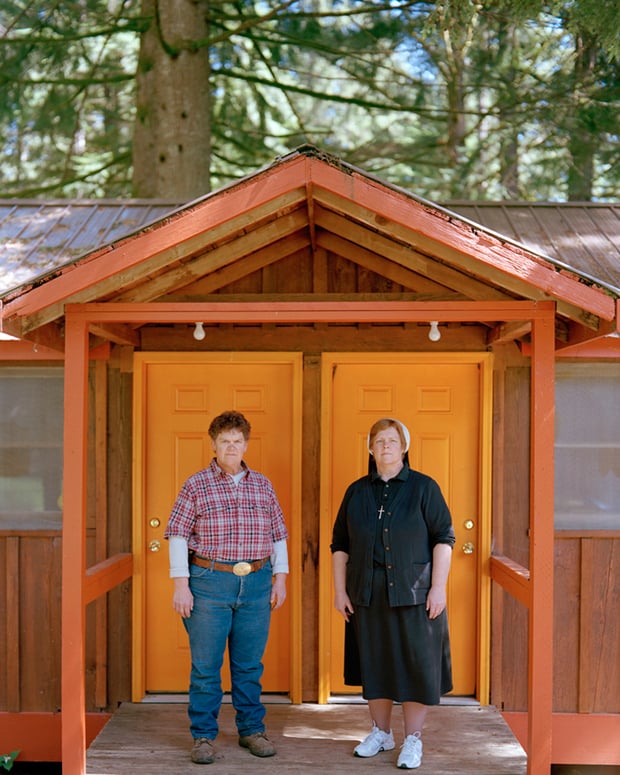 PP: Did you or your subjects make the decisions about poses and background scenes?  Or was it more of a collaborative effort?

KC: The portrait subjects suggested all of the locations. As part of my solution to the problem of how to create an authentic, meaningful project in a city I don’t know very well I would ask each portrait subject to suggest a location that was meaningful to them. In this way, my subjects took me on a grand tour of the city.

Each of the poses came about in a different way. Most of the time I would make requests of the subject, posing them in a way that utilized the natural light that was available, but many added their suggestions and made the portraits better. Jedediah Aaker, who posed for me in his lion suit, suggested we take his portrait on top of the bar where he bartends. When we were on the roof he asked me if I wanted him to curl up like a kitty in the ivy growing over the top of the roof. Yes, yes I did. 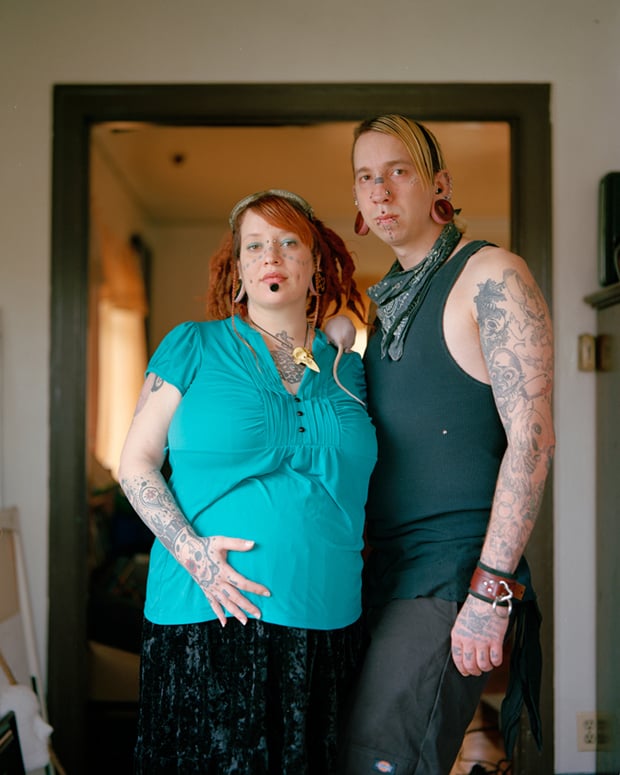 PP: Since you seem to need to travel a lot for your projects, I’m interested in what you consider to be your essential equipment to take along.

KC: The equipment I use for each project is planned out ahead of time. Each body of work utilizes different tools, film, and cameras: from a Linhof 4×5 to a plastic Fuji instant camera. The essential equipment varies. If, however, the project is not going to be hand-held, then I have to say my essential equipment is a tripod.
Portraitlandia’s essential equipment was loaned to me by RayKo Photo Center in San Francisco. RayKo graciously provided me with the 4×5 camera, lenses, film holders and tripod I used while in Portland. 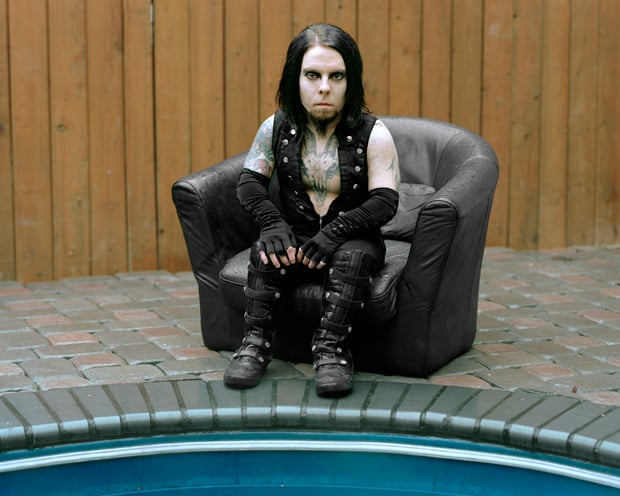 PP: Out of all the images you’ve created for this series, is there one that you like the best or are most proud of?

KC: I would not like to choose one portrait and call it a favorite. However, Mary Kozlov’s portrait was the first to be exhibited by Candela Gallery in Richmond, Virginia. At the end of the exhibition the piece was purchased for the Candela collection and will be donated to a museum in the future. Then, Mary’s portrait was curated into the Taylor Wessing Portrait Prize exhibition at the National Portrait Gallery in London. The exhibition opens in November and afterward will go on tour, including the National Portrait Gallery in Edinburgh, Scotland. Though I don’t want to pick a favorite, I’m proud and honored that so many people will see Mary’s portrait. PP: You’ve described the naming of Portraitlandia as a somewhat serendipitous event.  Were there any other things that surprised you about this project?

KC: The Newspace residency was full of serendipity and surprises and I’m grateful to the people of Portland who helped me create the work. That said, the most surprising series of events happened after I left Portland. WIRED posted a story about Portraitlandia and the project sort of went viral. Within a few weeks I had requests from around the world to write about the photographs. Each story seemed to added to the traffic on my website and I received over 2 million hits in a very short time. That was surprising, but also a blessing. I’m thankful. 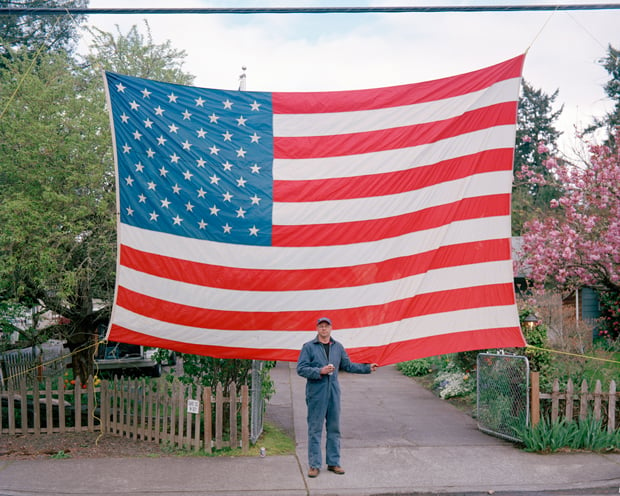 PP: What plans are in the works for the future? Are there any new projects or exhibitions on the horizon?

KC: I began a body of work in late 2010 called The Point. An exhibition is scheduled for September 2014 at RayKo Gallery in San Francisco. I will release the work on my website just prior to the exhibition.

Earlier this year I released the first part of an ongoing body of work around the bankruptcy in Stockton, California titled Bank Rupture. I travel to Stockton each week and am very excited with the way things are going. I will release the completed body of work after the Stockton bankruptcy is complete. The first part can be seen on my website.

I have quite a few exhibitions on the horizon, but being included in an exhibition at the National Portrait Galleries in London and Scotland are definitely a highlight. 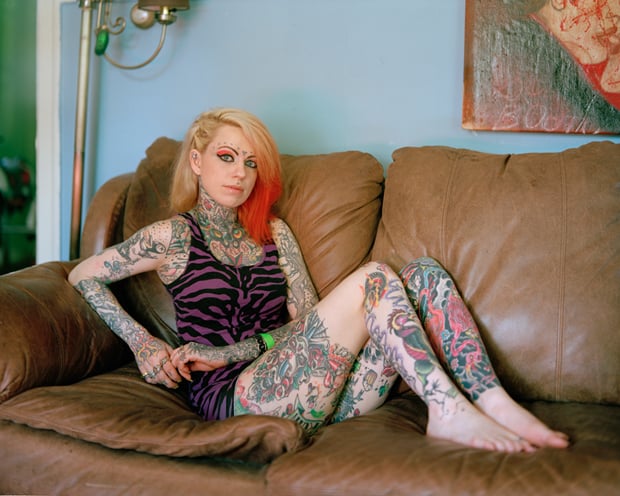 PP: Kirk, thank you for your time.

How to Drop $725K on Gear: The Priciest Items Sold by B&H