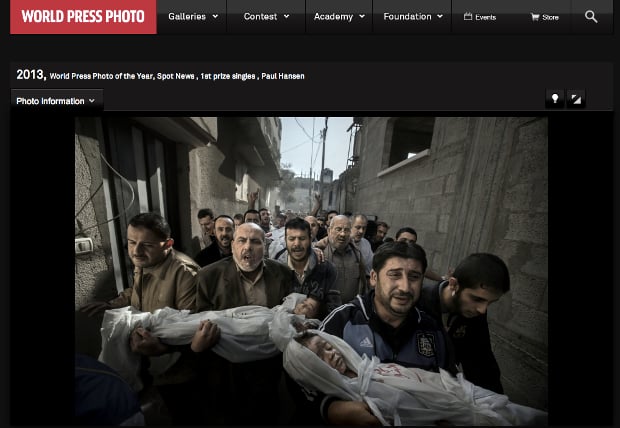 In light of the heated debate over post-processing sparked by the winner of World Press Photo of the Year 2012 award, the Amsterdam-based organization has chosen to implement some rule changes before it asks for this year’s entries in a couple of months time.

According to the British Journal of Photography, World Press Photo isn’t taking any chances when it comes to post-processing this year. Paul Hansen’s Gaza funeral procession, which won last year’s prize, caused the organization a major headache, forcing it to go so far as to launch an official investigation complete with forensic imaging experts.

In the end, the photo was found to be legitimate and not a composite; however, the forensic experts used did admit that Hansen’s photo had seen “a fair amount of post-production, in the sense that some areas [had] been made lighter and others darker.”

That information — along with many published opinions like this one, which lamented the fact that contest winners “look like movie posters” — has convinced the organization to implement some rule changes this upcoming year, a fact confirmed by World Press Photo managing director Michiel Munneke.

“We have evaluated the contest rules and protocols and examined how to create more transparency, and we have changed the procedures for examining the files during the judging,” Munneke said by way of a press release. “We will announce further details when the 2014 Photo Contest opens for entries later this year.”

The “bottom line,” according to Munneke, is that the organization “will need to be able to rely on the integrity and professionalism of the participating photographers.”